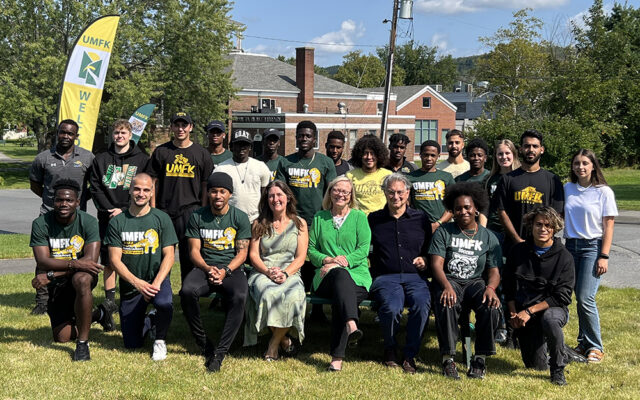 Contributed • October 4, 2022
This September, the University of Maine at Fort Kent received a pledge of  $68,593.09 to add to the endowed Michael Simon Scholarship, raising the scholarship’s market value to $300,000. This contribution was from the estate of Michael Simon with additional contributions from his brother, Jamil.

FORT KENT, Maine — This September, the University of Maine at Fort Kent received a pledge of  $68,593.09 to add to the endowed Michael Simon Scholarship, raising the scholarship’s market value to $300,000. This contribution was from the estate of Michael Simon with additional contributions from his brother, Jamil.

The scholarship was established in 2011 by UMFK on behalf of the University of Maine at Fort Kent Foundation by Abdallah H. and Francine I. Simon, in honor of their son, who made his home in Fort Kent for many years.

As designated by the foundation, the fund is used to benefit accepted students enrolling in an undergraduate degree at UMFK. The scholarship is awarded annually under the direction of the president of the university, or her designee.

“In terms of public universities, we know that UMFK’s tuition is among the lowest in the nation, but many of our students still need additional support. What we really want is for our students to focus on their studies and not on how they will pay for it,” said UMFK President Deb Hedeen, “Jamil’s meaningful gift allows us to help even more students and make a bigger difference.”

Since its inception, 103 scholarships for a total of $82,158.50 have been awarded from the Michael Simon Scholarship. Typically, $8,000 per year is awarded, but with the additional contribution, that amount will likely grow to $12,000 annually.

The contribution is another example of the ongoing generosity of the Simon family. Earlier this summer, Jamil presented UMFK with a separate major gift, in the name of his late brother, to update the soccer field by adding lights for nighttime practices and games. The field is now called Michael Simon Field. The family previously provided a substantial gift to UMFK for the construction of Nadeau Hall — named after a family that Michael was particularly close to.

Michael was a resident of Fort Kent for almost 40 years, from 1983-2022. He was well known in the community and on campus. In the 1980s, he enrolled and took courses at UMFK. Throughout his life in Fort Kent, he had meals at Nowland Hall’s cafeteria, worked out at the UMFK Sports Center, and visited Blake Library. UMFK was a big part of Michael’s life. The Michael Simon Scholarship continues his legacy by impacting the lives of UMFK students in the positive way that the university impacted him.

Heavy snow is expected to overspread the Valley this afternoon and continue into the evening hours.
Crown Politics END_OF_DOCUMENT_TOKEN_TO_BE_REPLACED

Maine’s longest serving legislator, Martin was first elected to the Maine House of Representatives in 1964 when he was 23.
Our Sponsors END_OF_DOCUMENT_TOKEN_TO_BE_REPLACED