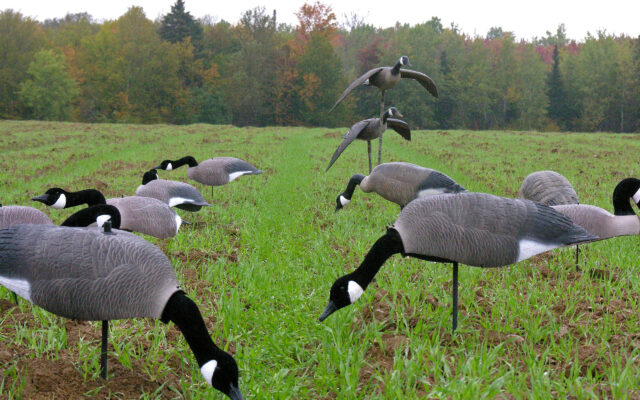 Wave for the waterfowl

Hunting season for native Canada geese runs Sept. 1-24 and the generous six-bird-a-day limit attracts a growing number of local waterfowlers and many from downstate as well.

There’s actually a 10-goose daily limit in the south and coastal zones, but here in the Crown of Maine we have more local honkers, a wide array of fields with attractive grain, grasses and other food options and very few “no hunting” signs.

Another plus to this early season is the high percentage of young geese. Unlike older birds and migrating honkers that will start arriving next month, juvenile geese are easier to decoy.  They haven’t seen all the decoy setups, heard all the various calls and flown over hundreds of blinds and hunters while being shot at and survived. The plentiful number of geese born this spring increases hunting success, and is especially advantageous to novice waterfowlers and youngsters.

If there’s a downside to the early season hunt, it would be that most flocks are fairly small, most being family groups of 6 to 12 geese. They won’t start to form larger flocks until the weather gets colder and migrating birds begin arriving in large numbers. The other challenge is locating a field where the honkers are feeding and hoping they will return the next day when you set up blinds and decoys. There are just so many crop fields to feed in that flocks change locations often depending on weather, wind speed and direction, and just the whimsy of the older birds leading the feeding flights.

One of the most important guidelines of hunting waterfowl is to wear lots of camouflage clothing, especially gloves and face mask, since those two areas have the most need for some movement. The main addendum to that rule is stay as motionless as possible. A Canada goose has the eyesight equivalent to a 10-power scope — far superior to humans. Any overt movement will be seen from afar as the many sharp eyes in a flock search for danger as they approach a field, and they will quickly avert and wing away.

Whatever style of blind you use — layout, hay bale, lean-to or natural hedge and field-edge brush — must be well concealed to hide movement. Use of commercial camo cloth combined with limbs, leaves, stalks of grain and tall grasses are a great benefit. Hunters won’t need a lot of decoys since local geese are used to seeing small, family size groups; a dozen or 15 will work. The more realistic and life-size, the better. I prefer full-body, fully flocked, set on a motion stake, allowing the decoy to gently turn and move realistically when a mild wind blows.

There is one important and very beneficial exception to the “no movement” rule and it will greatly benefit your hunting success. Use a flag to simulate flying and landing geese near your decoys; nothing will work better to get the attention of faraway flocks. They will see the movement with their acute eyesight and think other geese have found food and are landing, and as they wing closer to investigate then they will spot the decoy spread. 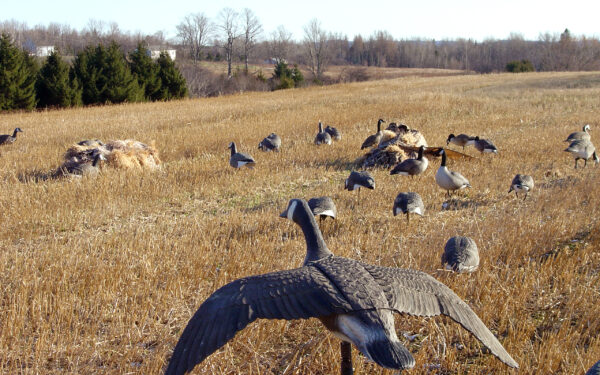 Early season goose hunting does not require a lot of decoys, but using a handheld flag and adding a an elevated landing decoy that moves in the wind like the one pictured in front greatly increases success. (Courtesy of Bill Graves)

I made my own first waterfowl flag over 25 years ago by sewing and a black and white triangle of cloth together into a square and stapling it to a three-foot length of dowel. Initially it was very effective for attracting sea ducks along the coast, so I tried it for geese and found it really got the attention of distant passing flocks. Now there are dozens of commercially produced goose flags. This item is likely to be the least expensive and most effective piece of gear for honker hunting, often costing less than a box of non-toxic shotgun shells.

There are dozens of high-tech versions of basic flags; one very good one is a Tyvek cutout of a flying goose that is screen-printed in full color. This “goose kite” is attached by a 3-foot length of string to a 15-foot extendable Fiberglas pole and sails over the decoys on the lightest breeze like a real goose. There are other models that perch on a 4-foot pole stuck in the ground. Another sits on a tripod a foot off the ground, with flapping wings to portray realism and motion among the decoys.

Whatever else a goose hunter carries afield for September honker hunting, some sort of manual flag is a must. It’s far better than more decoys or larger, louder calling. Wind-activated or even the more intricate and expensive battery-operated flapping or spinning wing decoys can be effective also. This is the one situation where some hunter motion is acceptable and an advantage.

Wave to the geese and perhaps they will come closer and wave back.

A cold front moves through today with scattered showers that will taper off this evening as high pressure builds into the region with partly cloudy skies.
Crown Politics END_OF_DOCUMENT_TOKEN_TO_BE_REPLACED

All five candidates running for two seats on the Fort Kent Town Council gathered at a live question and answer forum.
Our Sponsors END_OF_DOCUMENT_TOKEN_TO_BE_REPLACED