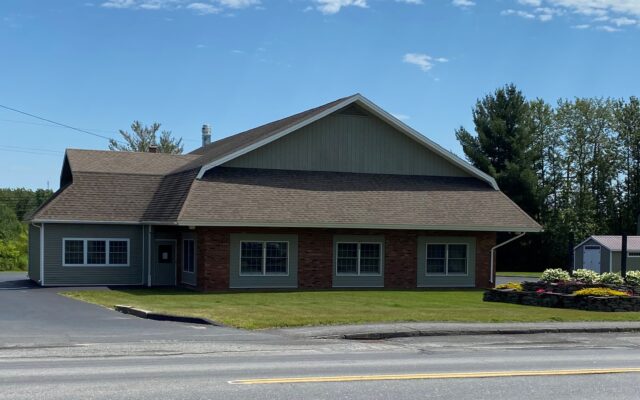 Emily Jerkins, • July 5, 2022
From its early days as a movie theater to later housing both police and fire departments alongside town staff, the municipal office in Van Buren has served as the heart of the community for decades.

VAN BUREN, Maine — From its early days as a movie theater to later housing both police and fire departments alongside town staff, the municipal office in Van Buren has served as the heart of the community for decades.

But after more than 50 years in the same place, town officials are relocating the municipal offices.

The current town office building in Van Buren was converted from a vacant movie theater built around 1940 after a fire destroyed the old town office in the early 1970s. The fire also caused the loss of the then Police Department. Very few, if any, renovations have been done since, according to Van Buren’s bookkeeper Luke Dyer.

While the building has served the town well over the last 50-plus years, Dyer said it has a multitude of issues needing to be addressed. The roof is leaking in several locations causing interior water damage and mold, in addition to floor tiles in the municipal offices containing asbestos Dyer said.

While the town had not been actively looking to relocate its municipal functions, an opportunity came to the attention of town officials regarding the vacancy of the Northern Aroostook Alternatives building at 320 Main St.

The NAA building has undergone more than $418,000 in renovations in the past couple years to include a completely new efficient heating system, LED lights and other more modern features. It is a very solid building that has been meticulously maintained since it was owned by NAA, according to Dyer.

“The obvious advantages of the new building are the ultimate cost savings to the town,” Dyer said. “We did a three-year cost comparison between the current town office and the NAA building. The town will save a minimum of $5,800 a year in the cost of utilities (heat, water, electricity).”

Van Buren voters authorized the purchase of the NAA building using up to $350,000 of discretionary funds already available during the annual town meeting on June 15.

The funds were not collected directly from taxpayers and the purchase, minor renovations and the move from one building to the other will not be passed on directly to the taxpayers of Van Buren, Dyer said.

The Fire Department offices, which are on top of the current town office, will remain where they are, Dyer said.

“If the Town is able to re-establish its police department [which had been disbanded in 2021], there is ample space, and a separate entrance available to accommodate that department,” Dyer said. “Additionally, there is a two-bay garage at the NAA building to house patrol cars. In the past the PD has shared garage space with the Van Buren Ambulance Service and had never had its own space.”
Correction: A previous version of this story contained an error. Luke Dyer is no longer the town’s bookkeeper. He became the town manager on July 1.