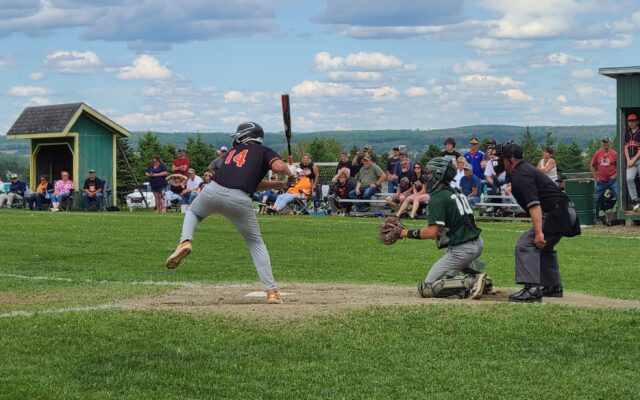 Emily Jerkins, • June 14, 2022
Hopes of reaching the Class D North championship were not meant to be for the Wisdom baseball team.

ST. AGATHA, Maine —Hopes of reaching the Class D North championship were not meant to be for the Wisdom baseball team.

The top-ranked Pioneers were eliminated from the postseason Saturday with a 9-5 upset by No. 4 Machias.

“We had a really good season,” Wisdom coach Todd Roach said. “This was definitely a hard fought battle today. We didn’t capitalize on all the opportunities that we had and that unfortunately came back to bite us. But it was a fun season, a battle from both teams and a fun game to watch.”

Wisdom’s Sam Roy, who had attended his own graduation that morning, pitched the majority of the game for the Pioneers, allowing five walks and striking out three. Jack Desjardins of Wisdom took over the mound, allowing two walks with no strikeouts. 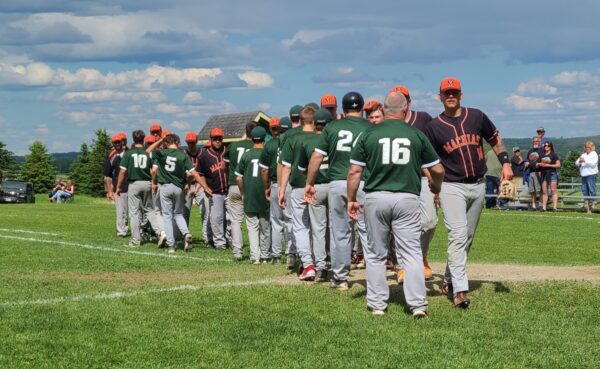 Having also attended his own graduation ceremony that morning, Pioneer Carter Pelletier said the combination of graduating and the team’s loss brought mixed feelings, but he is still proud of his team’s accomplishments.

“We fought hard,” Pelletier said. “(Machias) just have deeper pitching than us and at the end of the day, they have the better team. Hopefully, (the Pioneers) will get them next year.”

The first inning started out rough for the Bulldogs as Kason Fergeson ground out to shortstop Jack Desjardins followed by Kashman Feeney hitting a fly out to center field which was caught by Kaden Daigle. Sam Roy then pitched his first strikeout against Jayden Rhodes. Wisdom made their first run in the bottom first after Carter Pelletier hit a single with Sam Roy and Jack Desjardins on base.

Wisdom held off the Bulldogs in the fourth inning, but allowed two more runs in the top fifth by Ethan Foss and Shane Feeney after Lucas Robicheau hit a double on a fly to right field. Pioneer Dominick Gendreau hit a single in the bottom of the fifth allowing Carter Pelletier to score, making it 5-2 in favor of Machias.

The Pioneers attempted to rally in the bottom sixth as Michael Roach, Kaden Daigle and Sam Roy each scored, cutting the lead to 7-5. That would be as close as Wisdom would get.

Machias plated two more runs in the top of the seventh for the decisive 9-5 final.

“We showed up and Wisdom definitely showed up, you can see why they were the No. 1 team – they definitely played like it,” Machias coach Sam Whitney said. “If it had gone any more innings it could have been a different story. We had our pitchers, they all stepped up and made tremendous pitches. Key plays were made but we didn’t hit the ball as well as we hoped to, but that goes toward Wisdom’s pitching staff that did a great job.”

A cold front moves through today with scattered showers that will taper off this evening as high pressure builds into the region with partly cloudy skies.
Crown Politics END_OF_DOCUMENT_TOKEN_TO_BE_REPLACED

All five candidates running for two seats on the Fort Kent Town Council gathered at a live question and answer forum.
Our Sponsors END_OF_DOCUMENT_TOKEN_TO_BE_REPLACED