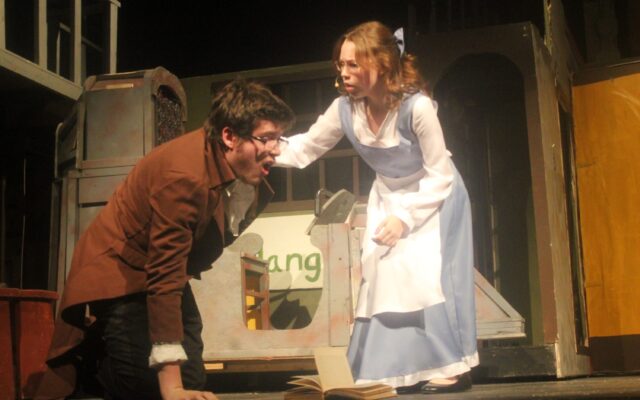 Jessica Potila, SJVT / FhF Staff Writer • June 4, 2022
When the audience wants more after two and a half hours, the show is really good. Fort Kent students in grades 5 through 12 proved that with their performance of “Beauty and the Beast.”

FORT KENT, Maine – When the audience wants more after two and a half hours, the show is really good. Fort Kent students in grades 5 through 12 proved that with their performance of “Beauty and the Beast.”

The students’ four-show run of the Disney musical opened on Thursday to about 200 audience members who rewarded the performance with a standing ovation at the University of Maine at Fort Kent Fox Auditorium.

Sadie Cairns was mesmerizing as Belle, the ‘Beauty’ character who falls in love with Oliver Caron’s ‘Beast.’ The freshman Cairns was born with a voice for Broadway, but has never taken formal singing lessons.

“She goes to places with her voice that are hard to go to for most high school students,” Fort Kent drama coach Doug Clapp said. 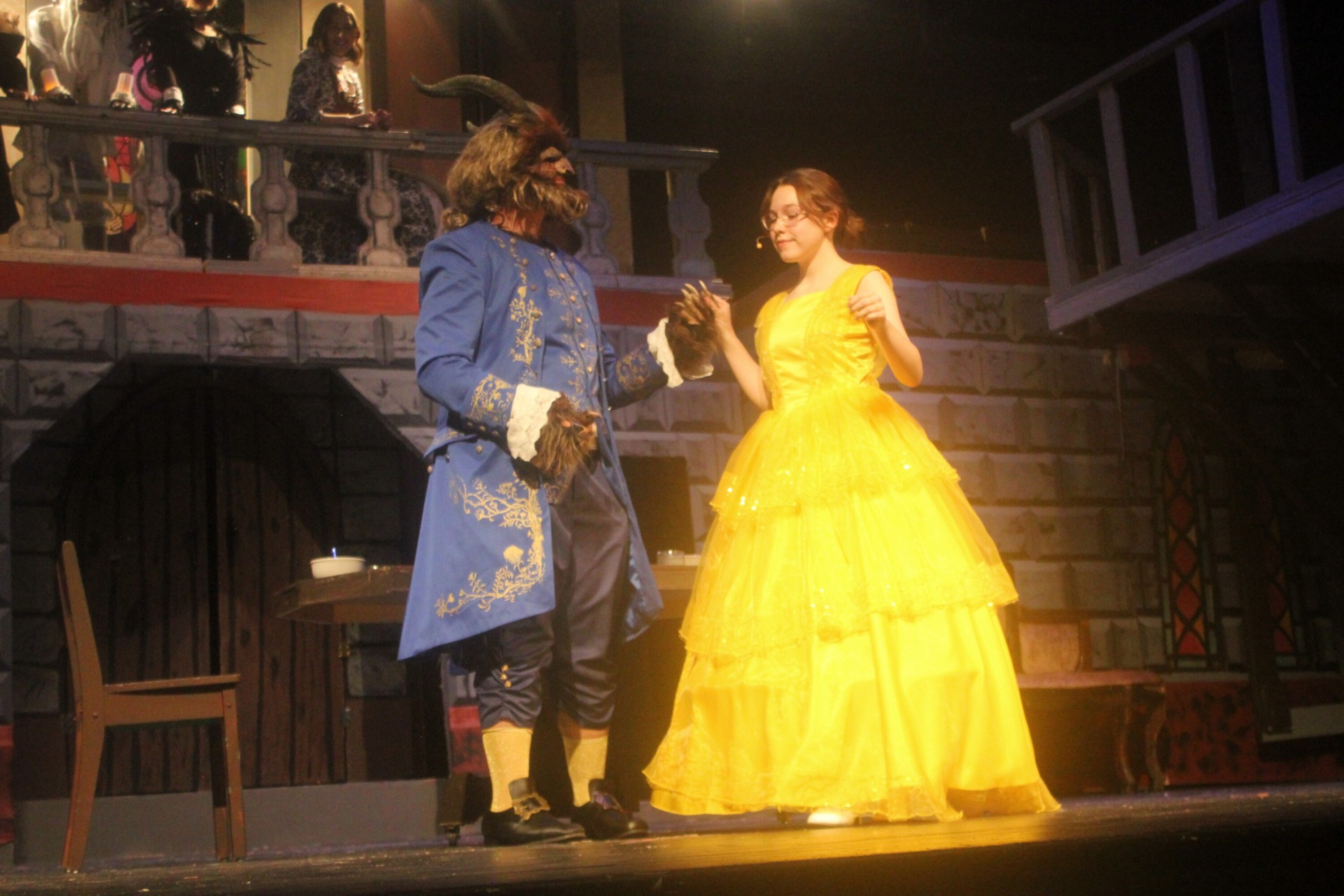 Jaymes Weaver (left) and Halle Michaud light up the stage during an opening night performance of “Beauty and the Beast” on Thursday, June 2 at Fox Auditorium. (Jessica Potila | St. John Valley Times)

Although wearing a creepy beastly mask that covered all of his face, Caron managed to evoke sympathy through his powerfully emotive speaking voice and expressive body language.

“He’s got his mask on most of the time but you feel for him,” Clapp said of Caron’s Beast.

Olorin Braun as the egocentric Gaston “energized the tavern scenes with the movement and physical agility of the character,” Clapp said.

Despite his arrogance, it was impossible to truly dislike Gaston due to Braun’s charisma and comedic timing. 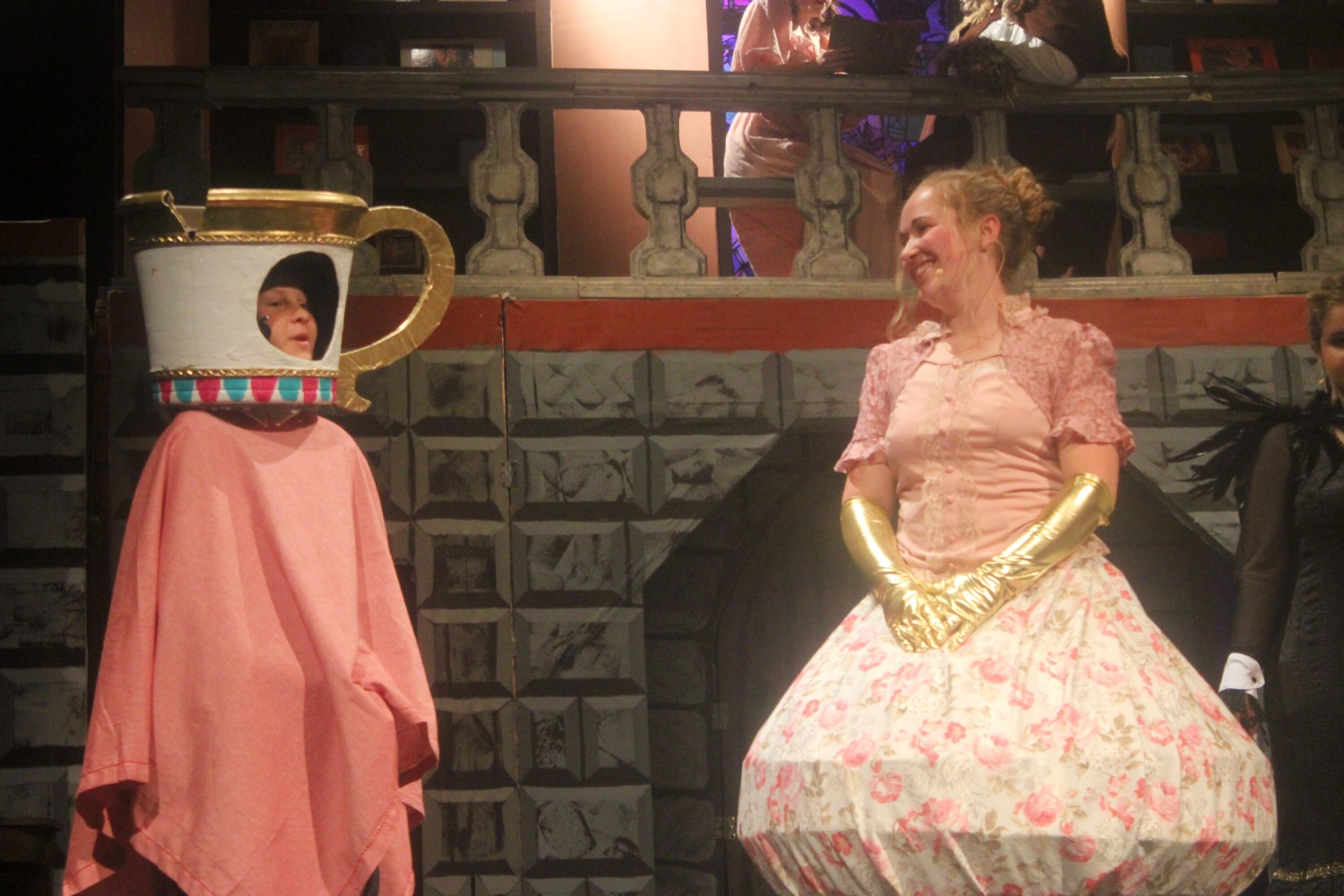 Tia Saucier as Mrs. Potts delivered a lovely rendition of the famed theme song from the show, “Tale as Old as Time.” 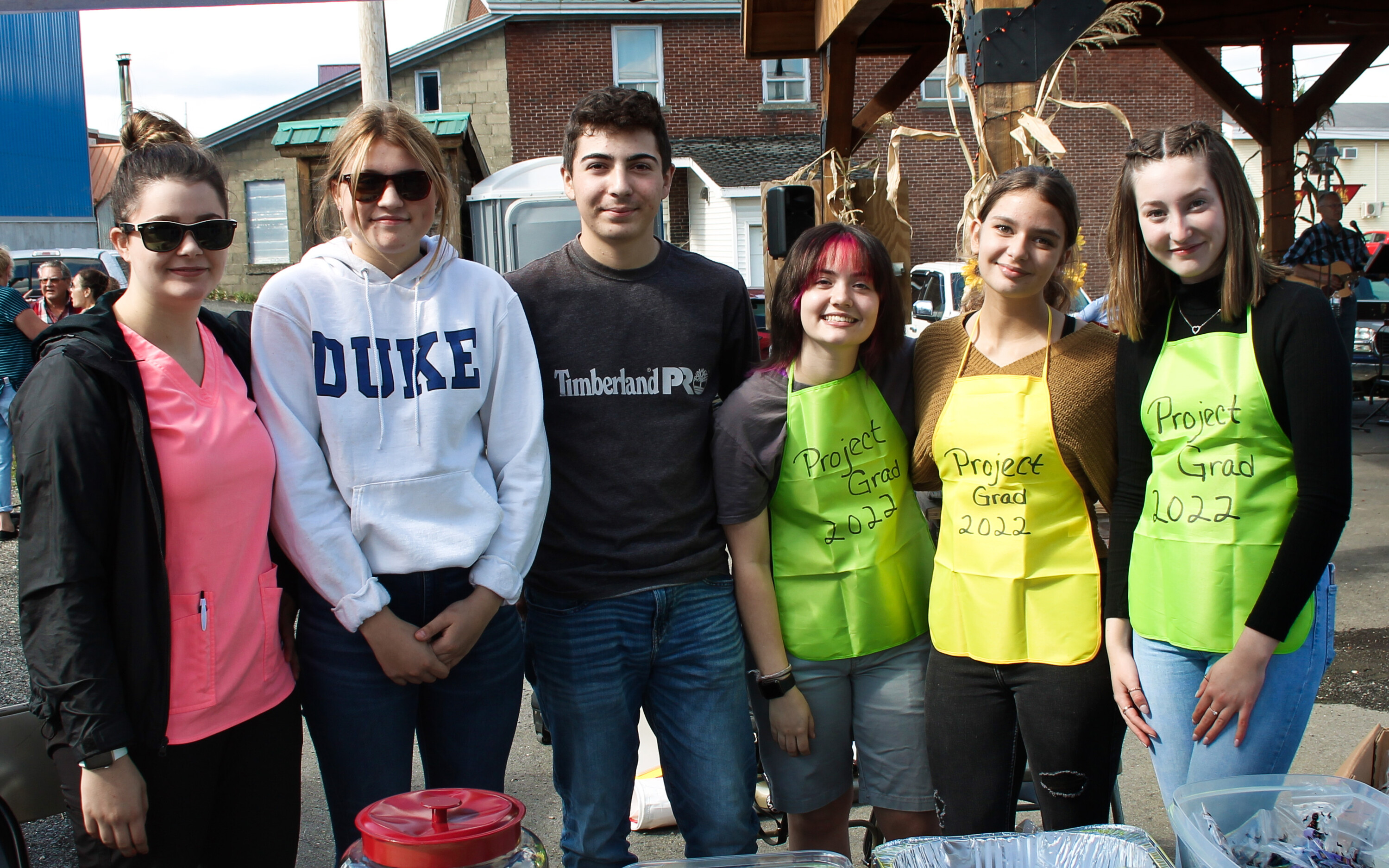 Hannah Albert (second from right) will represent Maine at the SkillsUSA Leadership and Skills Conference in Atlanta the week of June 20. This photo is from a fundraiser from Project Grad. Other students pictured are from left: Jessica Theriault, Chantal Ackley, Pierre Hickey, Emmanuel Morin, Albert and Isabelle Lavoie. (Hannah Catlin | St. John Valley Times) 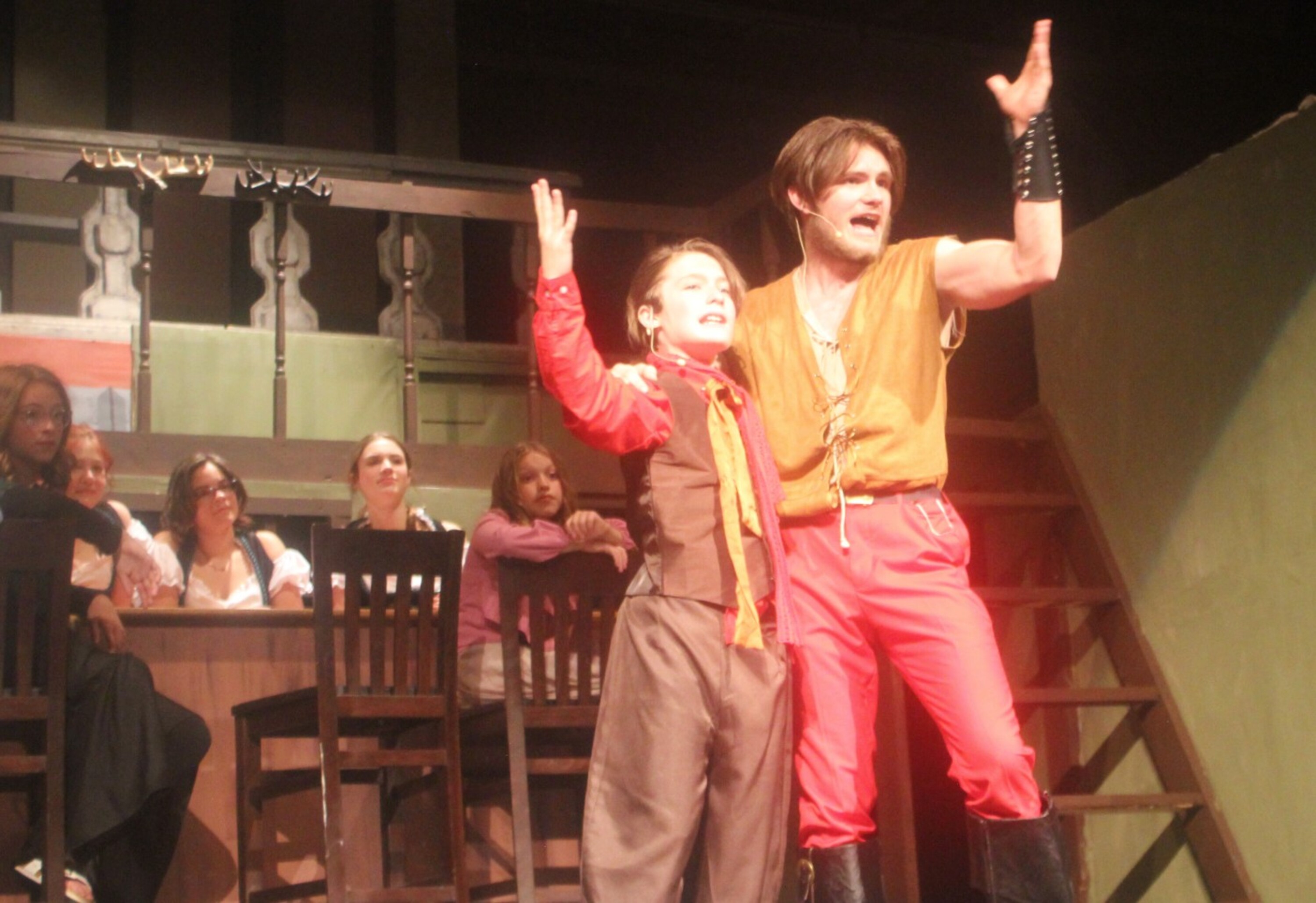 The younger students’ performances bode well for the future of the high school drama program, and their energy and enthusiasm are palpable, Clapp said.

A promising thespian is fifth-grade student Troy Celik, who nailed the role of Gaston’s wise-cracking and betrodden sidekick Lefou.

“His sense of acting-self is always there,” Clapp said of Celik. “You can see that he thinks of himself as an actor. His delivery, ability to study lines and pay attention to the director when it comes to blocking scenes is well above a fifth-grade level.” 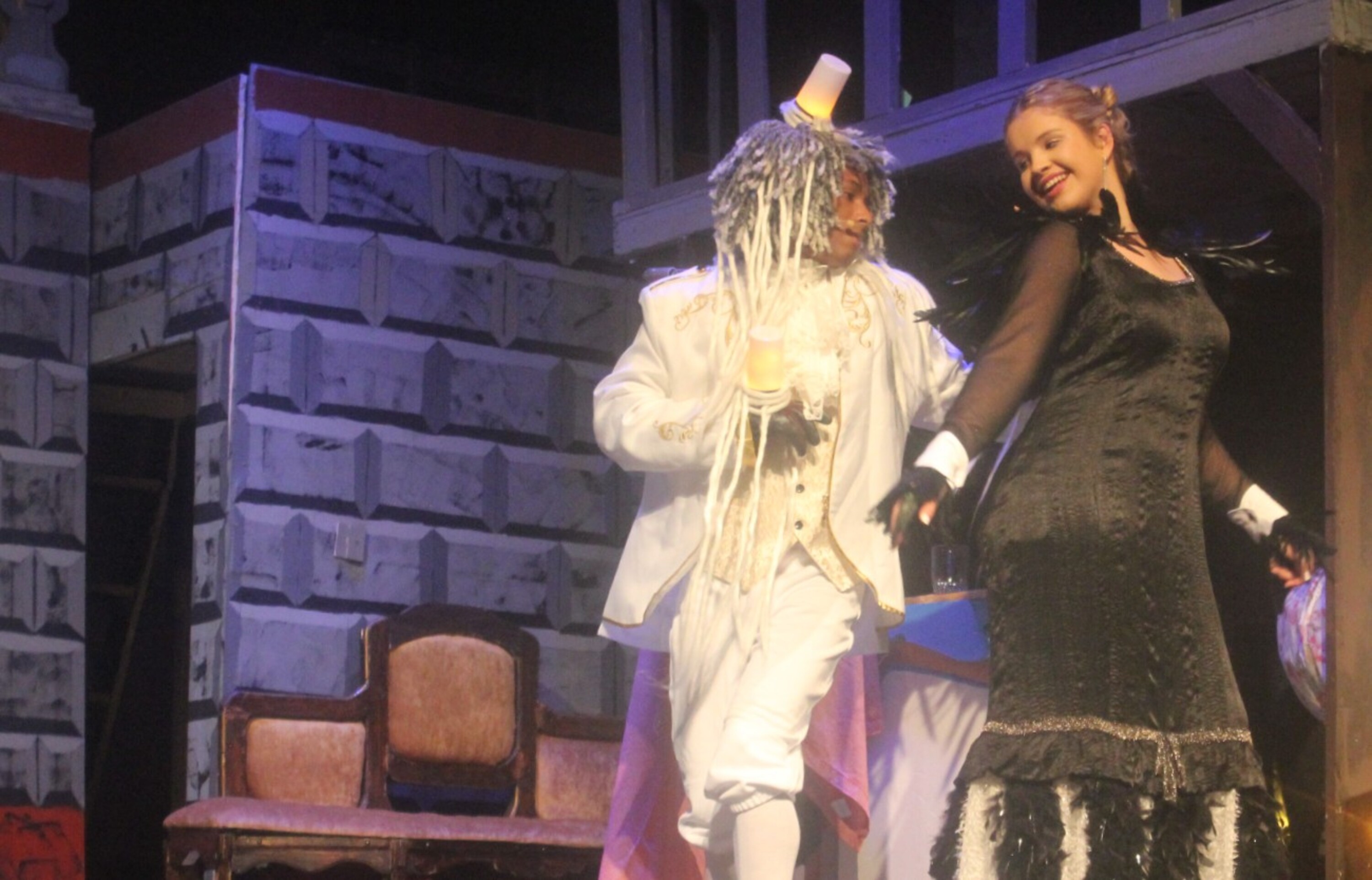 Jaymes Weaver (left) and Halle Michaud light up the stage during an opening night performance of “Beauty and the Beast” on Thursday, June 2 at Fox Auditorium. (Jessica Potila | St. John Valley Times)

Breakthrough performances were also delivered by Halle Michaud (Babette) and Jaymes Weaver (Lumiere), who drew laughter from the crowd alongside veteran Fort Kent actor Connor Pelletier, a master of facial expressions in his role as Cogsworth.

Minor flaws on opening night were endearing reminders that this is in fact a student play. One dedicated crew member in a last-second decision during a set change took one for the team by standing for an entire scene hiding behind and holding up a castle door that lost one of its hinges. 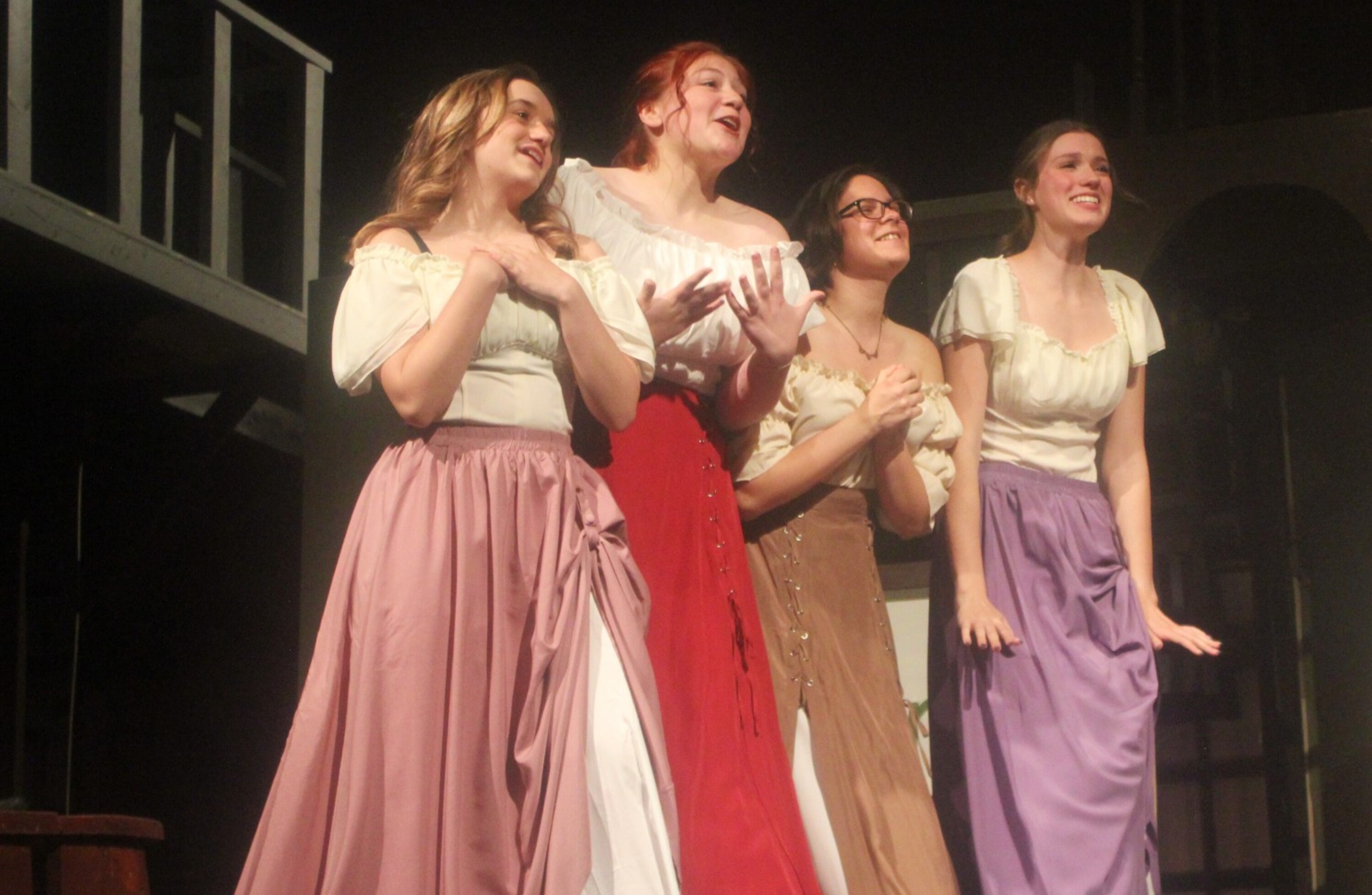 Clapp said he was pleased with the opening night performance and the public’s response to the production, which he said was put together in just two months.

The morning after opening night Clapp and his wife woke to text messages on their phones from people asking where they could obtain tickets.

WFKTV Channel 4 broadcasted live a Friday evening performance which can be viewed on the Channel 4 Facebook page.