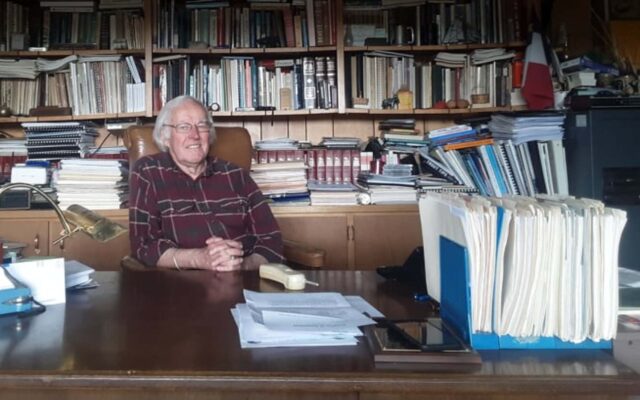 Jessica Potila, SJVT / FhF Staff Writer • May 21, 2022
Maine’s longest serving legislator, Martin was first elected to the Maine House of Representatives in 1964 when he was 23.

EAGLE LAKE, Maine — Hot off a five-hour drive from the Capitol Building in Augusta to his Eagle Lake home, Rep. John Martin hadn’t even unloaded his pick-up truck when his office phone began to ring.

The 80-year-old showed no signs of slowing down as he tied up his golden retriever in the backyard and sat for an interview in the book-littered office in the modest homestead where he was raised.

A cousin living just a few houses down dropped by with a jug of homemade maple syrup and a question about how to file for a Maine relief check. Constituents kept calling, about one every 15 minutes.

Maine’s longest serving legislator, Martin was first elected to the Maine House of Representatives in 1964 when he was 23. He has served a variety of posts since then, and will leave office in November due not to age, but term limits. His work to secure the Allagash Wilderness Waterway, distinct University of Maine campuses and an unsuccessful effort to establish the Dickey-Lincoln dam made him a household name along with politicians such as Edmund Muskie and George Mitchell. But Martin never lost his connection to the town of Eagle Lake.

Martin said state politics was low-paying but he managed as a political science teacher at University of Maine at Fort Kent, where he taught in the spring and summer semesters, and took off the winter semesters to be in Augusta.

His contribution to education as a teacher and lawmaker will be among Martin’s most lasting legacies.

“He knows so much of the laws in Maine because he has had a hand in writing most of them,” Pelletier said, pointing out that Martin went to battle for UMFK when it was threatened with closure. 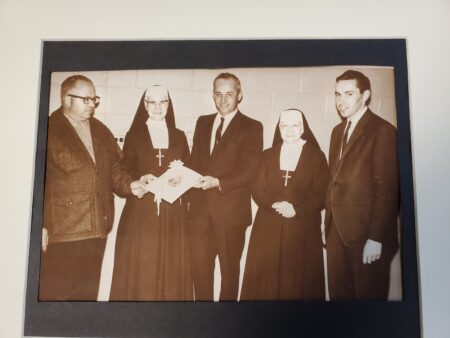 Martin ultimately had a hand in amending Maine law so that all seven University of Maine System campuses, including UMFK, are named by name and exist as part of state government. He also was a champion for the Community College System and higher education throughout Maine, Pelletier said.

“John certainly has left his legacy and whether people like him or not, no one can argue he has had a hand in just about every facet of Maine politics,” Pelletier said.

He joined the Northern Maine General board in 1965, and is the longest serving board member for the healthcare organization, which offers a multitude of services from long-term care to subsidized apartments.

“I can tell you that man doesn’t miss a meeting,” NMG CEO Michelle Raymond said.

Raymond said Martin’s legislative knowledge and connections helped even in his early years as a board member when NMG reorganized from being a hospital to a nursing care facility.

Martin was one of nine siblings, but said he was pretty much raised as an only child, because his parents had him quite late in life.

“I had three brothers serving in World War II who came back from the war and found this baby in the crib,” Martin said.

He recalls walks to the cemetery with his mother to visit the grave of his oldest brother, who died as a toddler during the 1919 Influenza epidemic.

Martin grew up on the water, and said since college he has only ever missed canoeing the Allagash River one summer, when he was serving in Washington on the vice presidential campaign of Edmund Muskie.

He was one of the lawmakers on a joint committee that recommended the creation of  the Allagash Wilderness Waterway, which Washington later approved.

“I think it’s a gem. It will be forever wild and available to people in Allagash,” Martin said.

Martin said he feels times are changing for the better, especially in Maine, when it comes to respect for the environment.

“People are much more environmentally concerned; they’ve seen the consequences,” he said.

As well as being the longest serving lawmaker in Maine history, Martin said he may just be in the running for another record.

“Not many people have put on as many miles to Augusta,” he said. “It’s shorter now than when there was no Interstate.”

Maine Senate President Troy Jackson said Martin has always been accessible to his constituents, even those who openly voted against him or publicly besmirched his reputation.

“People could say the most nasty things about him but if they went to him for help he was there,” Jackson said.

Gov. Janet Mills said Martin is as in touch with his constituents as any legislator ever has been.

“He was always willing to help a young person find a job or get into school, especially a person from the St. John Valley,” Mills said. “It’s like he invented constituent services.”

Mills said she and Martin have conferred on hundreds of matters over the last 20 years.

“He’s a jack of all trades when it comes to public policy,” she said.

Heavy snow is expected to overspread the Valley this afternoon and continue into the evening hours.
Crown Politics END_OF_DOCUMENT_TOKEN_TO_BE_REPLACED

Maine’s longest serving legislator, Martin was first elected to the Maine House of Representatives in 1964 when he was 23.
Our Sponsors END_OF_DOCUMENT_TOKEN_TO_BE_REPLACED