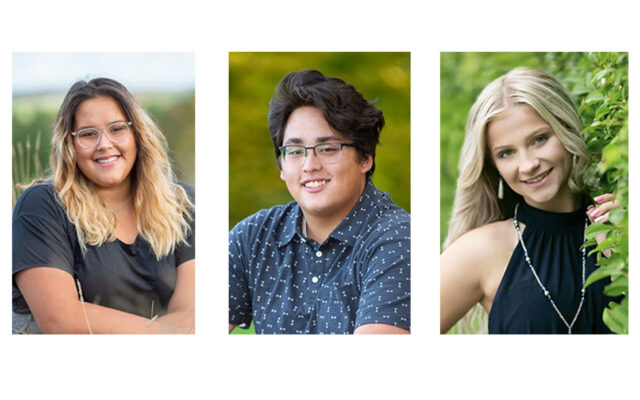 Valedictorian Kylie-Michelle LaPlante is the daughter of Peter and Dana-Michelle LaPlante. Kylie is the eldest of a set of triplets and has an older sister who is currently enrolled at the University of Maine at Presque Isle pursuing a degree in environmental science.

Throughout high school, Kylie has successfully completed many college classes and has completed a Pathway certificate through the University of Maine at Machias’ Early College Program. She is the vice president of her class as well as Van Buren District Secondary School’s chapter of the National Honor Society. She has played soccer, basketball, tennis, and volleyball and was captain for each of these sports. She has earned multiple awards including All-Aroostook honors for tennis and basketball, as well as being part of the All Aroostook all-stars her senior year. Kylie has been an active member of the Future Business Leaders of America, National Honor Society, yearbook, Poetry Out Loud, and Project Graduation. Recently, she has licensed as a CNA and will begin working at Northern Light AR Gould upon graduation.

Kylie will be attending the University of Maine at Orono this fall pursuing a BSN in the nursing program and will be joining the Honors College, Class of 2026.

Salutatorian Eric LaPlante is the son of Peter and Dana-Michelle LaPlante. Eric is the youngest child out of a set of triplets and has an older sister who is currently enrolled at the University of Maine at Presque Isle pursuing a degree in environmental science.

While in high school, Eric has completed numerous college classes and has earned a Pathway certificate through the University of Maine at Machias. Eric is the treasurer of his class and is also the treasurer of the Van Buren District Secondary School’s chapter of the National Honor Society. Throughout high school, Eric has been captain on Van Buren’s varsity tennis and soccer teams and has also played on the varsity baseball and basketball teams. Eric has also been an active member of Van Buren’s FBLA chapter, NHS, and Project Grad. He has earned many awards throughout high school including the Phi Beta Kappa Academic Award, the CTE Student of the Year Award, and the MPA Principal’s Award.

After high school, Eric will be attending the University of Maine in the fall to pursue a bachelor’s degree in forestry.

First Honor Essayist Renée Sarah Lapointe is the daughter of Michael and Christine Lapointe of Van Buren.Renée is currently the president of the Student Senate and is currently the National Honor Society president of her chapter. She serves on the Van Buren Schools Elementary and Secondary Education Act (ESEA) board. Renée has consistently been on high honors through high school, received her CNA and has taken 46 college credits, entering as a sophomore in the fall at the University of Maine studying nursing and minoring in dance.

Renée has lettered in soccer, basketball, and tennis. She has made All-Aroostook tennis, All-Aroostook soccer three years in a row, was part of the Northern Maine Class D All-Star Team, and was chosen for the Aroostook League Scholar-Athlete Award and received a $400 scholarship. Renée has participated in many pageants through the years, she won Jr. Miss Maine and competed in Arkansas, placing in the top 15. Renée is the only local girl in recent years to have held every single Van Buren title. She went on to win Little Miss and Pre-Teen Potato Blossom and is the current Miss Van Buren 2022.