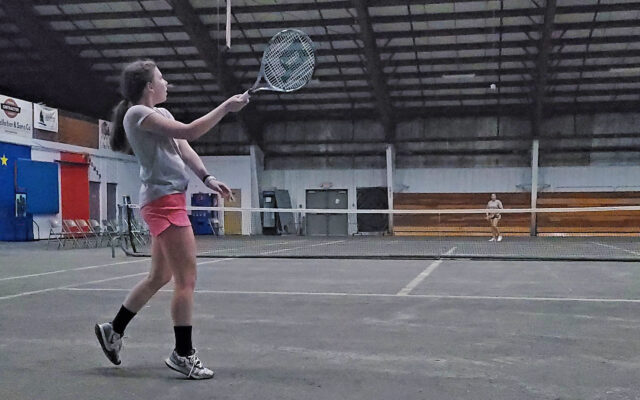 Emily Jerkins, • May 16, 2022
Tennis players in Madawaska may have the edge on other area teams as the Owls have indoor courts to play and practice on, but they have unique challenges of their own.

MADAWASKA, Maine — Tennis players in Madawaska may have the edge on other area teams as the Owls have indoor courts to play and practice on, but they have unique challenges of their own.

While other high school teams in Aroostook County have to practice tennis at the start of the season off the courts in gyms, tennis players at Madawaska Middle/High School have access to an indoor court located at the town’s Multipurpose Center.

Not only does it house the indoor tennis courts used by the Owls, the space also is used for a number of other activities including basketball, summer camps and a walking track, Picard said. During the winter months, the courts get covered as the space is converted into the town ice rink.

While other towns in Aroostook have community centers with similar uses, Madawaska’s Multipurpose Center is the only one used in Aroostook by a high school tennis team for practices and meets.

Owls Coach Dean Gendreau said the team is fortunate to have the use of the multipurpose building because while many teams wait for the snow to melt off their courts, his team can dive right into practicing on a court as soon as the season starts. The building allows for practices and matches to be held even if rain is in the forecast for the day, Gendreau said.

“We know when the season begins we will be playing, rain or shine, because of the indoor courts,” Gendreau said. “Our home matches are always played as scheduled. When the Maine Principals Association says ‘play tennis’ we are able to practice five days a week in the multi purpose.”

Though the team has the advantage when it comes to practices, the tennis playing Owls still face problems of their own. The girls team is only made up of five players: senior Hannah Albert and juniors Hannah Blanchette and Breanna Ouellette play singles for the team while junior Grace Robinson and freshman Alexis Levesque play doubles.

With only five members, there are not enough players to cover all of the matches, which means an automatic loss at the start of every meet giving their opponents the upperhand. In order to win the meet, the team needs to win three out the five matches played, where the other team will only need to win two. A full team would consist of seven players, three on singles and two on double teams.

For some players, playing doubles means more than just having two people on their side of the court. Ian Beaulieu, Carsen Cyr and Chris Boucher doubled up on sports played during the spring season as all three boys also play for the school’s baseball team.

Despite the odds stacked against both the girls and boys teams, Gendreau said the they have some good things going for them.

“Boys strengths are that we have a good group with lots of experience,” Gendreau said.  “Our singles players have been to the tournament and know what to expect, and our doubles teams also play baseball so they are very athletic and very busy at the moment playing two sports. Girls are young and work hard knowing that at every match they start with a loss because we do not field a full team. They try hard and support one another very well.”