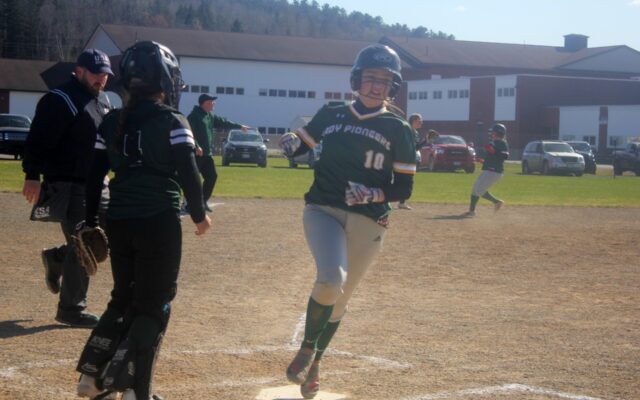 Jessica Potila, SJVT / FhF Staff Writer • May 10, 2022
People living in the small towns comprising Maine’s St. John Valley know that life is better when resources are shared, so when one high-school could not field enough players for a softball team, their competition one town over readily agreed to join forces.

ST. AGATHA, Maine – People living in the small towns comprising Maine’s St. John Valley know that life is better when resources are shared, so when one high-school could not field enough players for a softball team, their competition one town over readily agreed to join forces.

The Wisdom Middle/High School softball team was already complete with 12 players heading into the spring sports season, but when Coach Kevin Lavoie learned three Madawaska athletes were itching to play, but had no team to call their own due to a lack of players, the schools formed a cooperative team.

Such good will between the two schools, both members of the Valley Unified Education Service Center, is not uncommon.

In 2019, there weren’t enough Wisdom students interested in softball to form a team, so the few players who were interested formed a joint team with Madawaska.

“The (Madawaska) players are well-connected to our communities and play sports with my other players already in one way, shape or form,” Lavoie said.”There’s a lot of camaraderie and pride in playing collaboratively to achieve a common goal.”

The enhanced Pioneers are off to a running start, having won their first two games of the season, the latest being a decisive 10-3 victory over Fort Kent

The team is young, with only one senior, but Lavoie said that just allows for greater growth.

“As far as stand out players, I believe every player brings something unique to the field and the strength that we have is due to the consistency of players we have,” Lavoie siad.

The Pioneers had a winning season last year, and Lavoie said he has no plans to make any major strategy changes, other than incorporating the Madawaska players’ skills with the Wisdom athletes.

The team’s greatest strength is their ability to work together, and not independently, all with the same goal.

“We look forward to having a very strong season and see ourselves potentially being in the playoffs,” Lavoie said.

The Aroostook County Republican Committee will hold their election year County-wide caucus from 9 a.m. to noon on Saturday, Feb. 12, at the Presque Isle Inn & Convention Center.
Our Sponsors END_OF_DOCUMENT_TOKEN_TO_BE_REPLACED