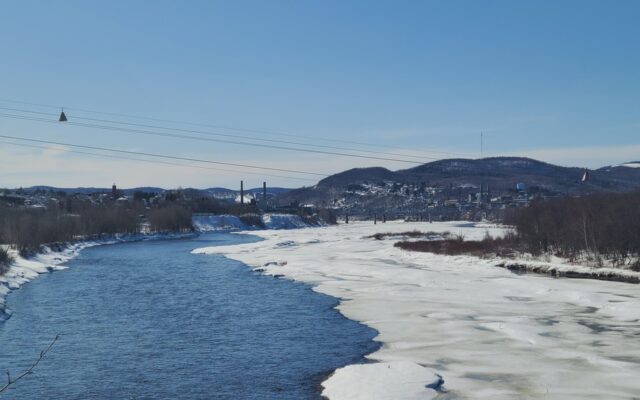 St. John River ice melting in a way that should not create flooding

Emily Jerkins, • April 5, 2022
As the St. John River begins its yearly melt, people all over the St. John Valley are watching for signs of flooding, though some towns need not worry as much as others.

MADAWASKA, Maine — As the St. John River begins its yearly melt, people all over the St. John Valley are watching for signs of flooding, though some towns need not worry as much as others.

Many in the St. John Valley remember the record-breaking flood in 2008 that affected the greater Fort Kent area where the Fish River joins the St. John River. The floods that year were caused by record-breaking snowfall during the 2007-2008 winter season, as well as a storm that brought up to 5 inches of rain, according to the National Weather Service.

As temperatures rise, snow all along the valley and into the Allagash will melt into the local rivers, but Maloit said there may only be minor flooding in some areas.

“The nice thing is that it’s gotten mild, but it’s not getting very warm so this is allowing for a gradual erosion of the snow and the ice. We also aren’t looking at any storm system coming up that would produce a lot of rain — several inches at least. So things are conspiring right now in a good way to allow for a gradual release of the ice, that minimizes the risks for any widespread ice jams and breakouts along the St. John or any of the rivers here in northern Maine,” Maloit said.

NB Power put a GPS barrel on the ice in Fort Kent on Monday, April 4, which will send an automatic notification to emergency management when the ice moves, allowing jams to be monitored until the barrel reaches Canada, Woods said.

So far, Woods said there haven’t been any ice jams or flooding that would cause much concern.

Though some areas at lower altitudes like Fort Kent, St. David and Van Buren may experience some minor flooding this year, other towns like Madawaska may go unaffected.

“We’re kind of unique here in Madawaska because we’re very high up from the riverbed,” Lt. Jamie Pelletier of the Madawaska Police Department said. “Even when you get out to St. David or Grand Isle, it’s a little lower so we do see the water level coming up rather high but still on the potato fields and stuff. It doesn’t even come close to causing a problem on route 1.”

The Aroostook County Emergency Management Agency has a page on Facebook dedicated to keeping area residents updated on any potential flooding.

Correction: An earlier version of this story contained an error. The average snowpack for the St. John Valley in 2008 was 52 inches.

Cloudiness in the region Thursday afternoon along with a slight chance for isolated showers Thursday night and Friday.
Crown Politics END_OF_DOCUMENT_TOKEN_TO_BE_REPLACED