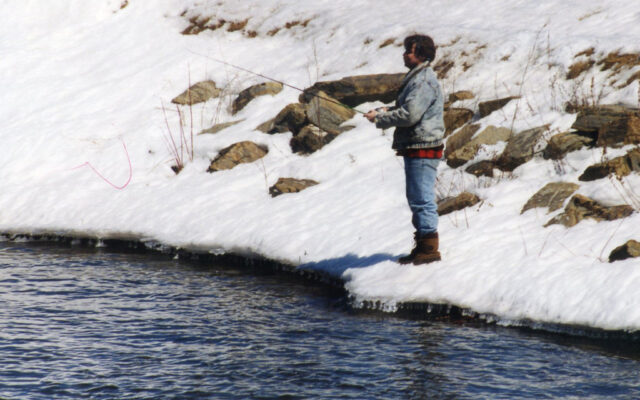 Bill Graves, Special to the Fiddlehead Focus • March 29, 2022
I’m not a big fan of April. Any month that begins with a special day for fools should be a bit suspect from the get-go.

I’m not a big fan of April. Any month that begins with a special day for fools should be a bit suspect from the get-go.

From an Aroostook outdoorsmen’s aspect there are plenty of things to do concerning upcoming outdoor activities starting next month, but precious few actual outings to currently enjoy. Unlike southern Maine where the folks are already mowing grass, working on flower gardens and actually fishing, we still have ice on the lakes, snow in the woods and spring fever in our hearts and minds.

Mother Nature controls spring melt in the Crown of Maine and every year is different. It’s a crap shoot when random spots clear of ice on regional brooks, streams and rivers, and anxious anglers need to be ready. Now I’m not saying Aroostook anglers can’t take some advantage of ice out, but there’s a big difference between “open water” and actual easy-to-reach, safe, fish producing open water. Nonetheless, in the words of my dear ole’ Dad, even poor fishing’s better than no fishing at all, and way better than work.

Brooks and streams offer the only early season options to dunk a worm or toss a lure or fly, and until water levels drop, clear up and warm up, bait provides the most consistent action. Some likely open stretches that annually produce for early April action include several spots on the Meduxnekeag above and below Houlton, on the Prestile below the Mars Hill and Robinson dams, the Fish River stretch between Soldier Pond and Fish River Falls, as well as a few spots on the Aroostook River. 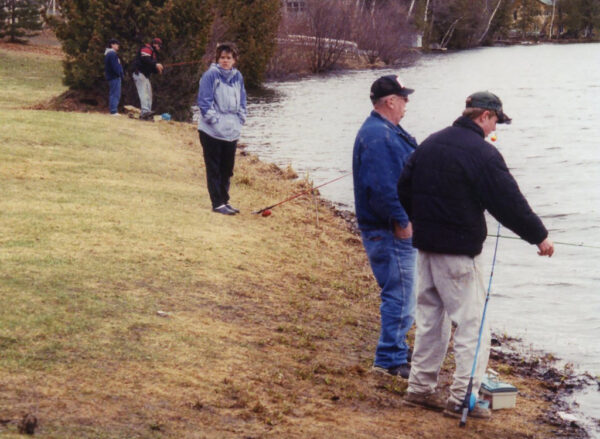 As soon as the ice melts along the shoreline of local ponds and lakes, ardent April anglers rush to cast a line for trout and salmon despite most of the waterway still being covered with ice. (Courtesy of Bill Graves)

If shooting is more to your liking, you have until April 15 to try a bit of wingshooting on crows. Aroostook County has a split season, and most springs the snow and mud make pursuing these wily, black varmints a tough chore. All a crow hunter really needs is a shotgun and a call, but an owl decoy and a couple of crow decoys will help perk up the action. Just find a hedge row, field edge or small woodlot, hang the owl decoy from an exposed tree limb and place the pair of crow decoys nearby in the trees or on the ground, and begin calling.

If any real crows are nearby they will quickly investigate the ruckus, and once they spot the owl, which they despise, the fun begins. They make more noise and dive bomb the owl decoy, trying to drive it away, and pretty soon more crows hear the fight and show up to help.

There are moderately priced electronic calls that feature real crow/owl encounters and they really stir up the action. Crow meat really isn’t very tasty, but the feathers are great for fly tying and they do offer challenging wingshooting targets.

Other open season gunning options include coyote, which can be especially tough in the spring melt and mud conditions; porcupine, an odd quarry with little real challenge; and groundhog. Groundhog hunting can encompass long-range sniping or sneak and shoot with .22s or shotguns at closer range. Unfortunately the best woodchuck action begins after all the snow is gone in May, so this month’s shooting can be fair to great dependent on snow cover and field accessibility.

Red squirrel hunting season never ends. They are often an exciting target and great for youngsters to learn stalking and accuracy. Not a lot of meat, but many folks like it stewed like rabbit and the tails are top-rate fly tying material. Newer models of whisper quiet .22 pellet rifles propelled by CO2 cartridges are great for urban edge squirrel sniping where shooting is legal outside compact zones.

While outdoor options seem a bit limited this month, I utilize the time to prepare for the big push and vast array of adventures from May through November. Make sure you have a new fishing license, or a combo hunt/fish, and while you’re at the town office be sure your boats and trailers are registered. It’s a good time of year to check over your boat, trailer and motor to make sure everything’s in operational order. Nothing ruins an outing quicker than equipment failure.

It’s also a good time to locate gas tanks, paddles, flotation gear and fishing rods and tackle, and if a trip to the sporting goods store is in order, do it now. Wait too long to look for new flies, lures or lines and all the good stuff may be picked over or gone.

I know there’s still snow on the ground and frost in the air, but my fingers are crossed for luck for an earlier than normal spring, so why not be ready? It never hurts to be hopeful.

Cloudiness in the region Thursday afternoon along with a slight chance for isolated showers Thursday night and Friday.
Crown Politics END_OF_DOCUMENT_TOKEN_TO_BE_REPLACED