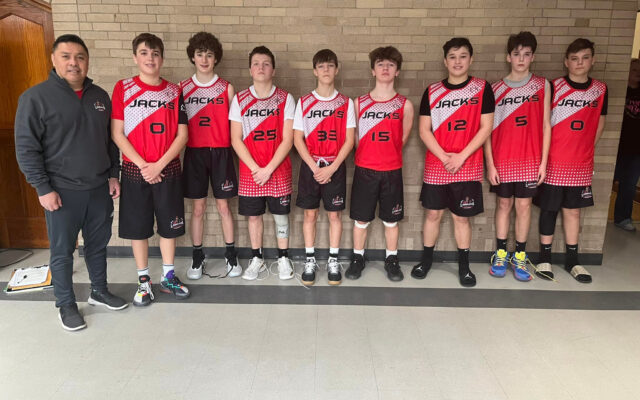 FORT KENT, Maine – A team of young northern Maine basketball players looking to up their game formed a team in affiliation with a competitive AAU league located downstate.

The ambitious middle-school team, comprised of students from Fort Kent, Madawaska and Fort Fairfield, joined the AAU Maine Lumberjacks this spring in order to expand their skills and broaden their experiences in terms of court competition.

The Maine Lumberjacks is a Bangor-based competitive basketball league formed in 2015 to bring student athletes with a love for the game together to play some serious basketball. There are currently 13 Lumberjacks teams, including the newly minted Fort Kent squad.

Maine Lumberjacks division of Fort Kent founder and Coach John Naranja said local student athletes interested in more competitive basketball outside the realm of their schools or Aroostook Youth Basketball League would previously join AAU teams based in the greater Bangor area, as no local AAU teams were available to them. They experienced travel challenges due to practice sessions downstate.

“I believe our community deserves a chance to compete on an AAU stage with our local talent,” Naranja said.

Narajna, who was also assistant coach of the Valley Rivers Middle School boys basketball team this season, said he has high hopes for the Fort Kent Lumberjacks.

“I’d love to see our kids develop and get into one of the state championships (for their high schools) in their time,” Naranja said. “If these kids stay together, I feel they could have enough of an impact to do that.”

The Fort Kent Lumberjacks currently have nine players, including seven eighth-graders, a seventh-grade student and even an athlete in fifth grade.

“These kids have a little bit higher interest in basketball [than the average youth ball player],” Naranja said.

Naranja said his players are in it to win it.

“We’re certainly not the tallest team, but we play with a lot of heart,” Naranja said.

Cloudiness in the region Thursday afternoon along with a slight chance for isolated showers Thursday night and Friday.
Crown Politics END_OF_DOCUMENT_TOKEN_TO_BE_REPLACED