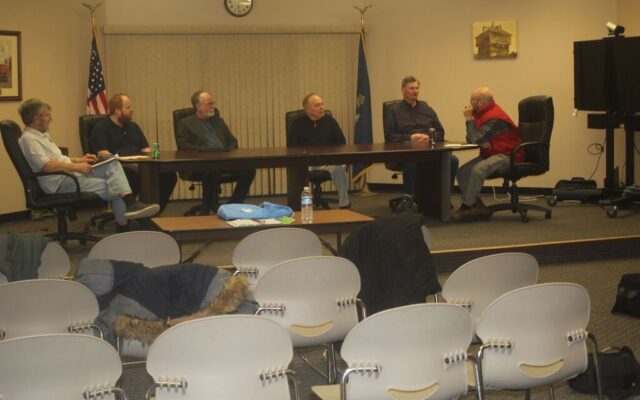 FORT KENT, Maine — The tone was civil and the outcome was productive when all five candidates running for two seats on the Fort Kent Town Council gathered at a live question and answer forum on Tuesday, March 8, at the Fort Kent Municipal Building.

Nicolas asked Birden what kinds of new businesses he would like to see come to the area.

“I think we have a reliance on traditional brick and mortar businesses. When I think of businesses coming into town, I think of income coming into town and trying to increase the flow of money that runs through the town,” Birden said. “I think that there’s opportunity for web-based businesses. I think that there’s opportunity through service-based businesses, again operating online. The nice thing is that (it) brings money into our economy.”

Nicolas asked Dayton whether the town ice rink is worth maintaining since it is at a financial loss to the town.

Dayton, who works at University of Maine at Fort Kent, said many students enjoy the ice rink. Dayton said he feels the ice rink should be advertised more, and special events created involving the ice rink.

Douglas said, especially in light of a Main Street fire that destroyed several businesses Feb. 28,  he feels there is an urgent need to redevelop the downtown area.

“I’d like to see the hospitality infrastructure improved because we’re trying to present ourselves as a destination for vacations — snowmobilers, skiers, ice fisherman and so on, and when you think about it there aren’t that many places to stay in Fort Kent.”

Robichaud said the current group of councilors, along with Town Manager Suzie Paradis, work well together.

“It’s been great to be a part of a positive movement. We’ve invested in our workforce and you can tell that by the morale,” Robichaud said. “We’ve worked hard to get money passed so we can pave our roads. We do that while trying to keep our taxes low.”

Robichaud said he is a fifth-generation Fort Kent resident, and there is no place he would rather live or raise his children.

Theriault was asked whether the town should become involved to build a recreation center.

Theriault said that Fort Kent recreation director Jason Nadeau has brought the idea to the council. Theriault said he would like to see a recreation building in the town similar to the Madawaska Multipurpose building.

“It all boils down to if the town could afford it, but I would definitely like to see in the future a place where both the young and the old go and benefit from it,” Theriault said.

Theriault said that such a building could also prove an indoor place for people to walk in the wintertime for some exercise.

“You take this winter, it’s been terrible and it’s dangerous (to walk on sidewalks),” Theriault said.

Fort Kent residents will vote for the Town Council candidates from 8:30 a.m. to 5:30 p.m. Monday, March 28, at the Fort Kent town office. The election hours were previously scheduled to begin at 10 a.m.

WFKTV Channel 4 broadcast the candidates forum in real time, and recordings of the event are available on the Channel 4 Facebook and YouTube pages.

The Aroostook County Republican Committee will hold their election year County-wide caucus from 9 a.m. to noon on Saturday, Feb. 12, at the Presque Isle Inn & Convention Center.
Our Sponsors END_OF_DOCUMENT_TOKEN_TO_BE_REPLACED