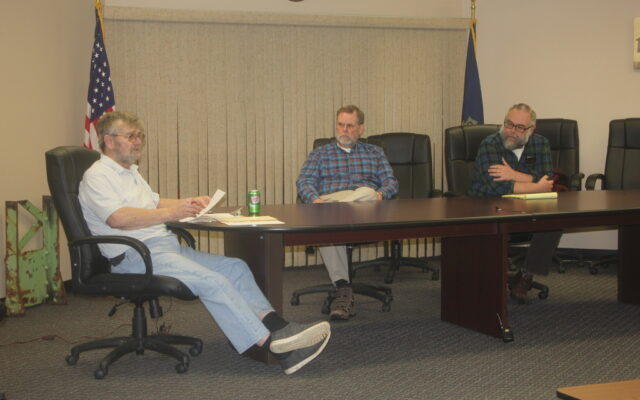 Incumbent SAD 27 board member Toby Jandreau and candidate David Soucy both attended the event, which was moderated by Danny Nicolas. SAD 27 incumbent board member Leroy McKenzie and candidateTanya Voisine did not attend the forum.

SAD 27 board representation is divided among seven subdistricts, based on location and population, with seven board members who represent the district towns of Fort Kent, New Canada, St. John Plantation, St. Francis and Wallagrass.

The four candidates are running for two available seats in Subdistricts 4-7, which expire in March and are voted for at large. Only voters who reside in subdistricts with open seats can vote in a March 28 election.

Among the questions presented at the forum, Nicolas asked Soucy what he feels would be his primary role if elected as a school board member.

“To make sure that we’re running effective schools, and that really boils down to that we’re delivering a good quality education to the children in the school district. I mean, that’s pretty basic — nothing more important than that,” Soucy said.

Soucy added that sometimes this goal can be overshadowed by other objectives.

“You can for instance get excited about building a new building and lose sight of the fact that really your fundamental job is to make sure these kids have a good solid education and have the tools they need to be successful adults,” Soucy said.

Nicolas asked the candidates what they feel should be the short-term and long-term goals of the district.

“Short term, we need to go back to having meetings where we actually get something done. I’m so happy that CDC has changed the guidelines. We’re not going to be debating masking anymore so we can actually talk about education,” Jandreau said. “Most importantly we need to go back and recommit in the short term to the fact that public school is worth it, our community deserves it, our children deserve it and we owe a duty to them to cooperate even when we disagree.”

Jandreau, a father of two district children, said of SAD 27: “This is a public good; we all benefit from it. If we short our school, then we’re killing our future; we’re salting the fields.”

McKenzie said he wanted to participate in the forum, but could not due to his commitment to host a meeting of Smart-Soucie American Legion Post 176 in Eagle Lake, where he serves as commander. The meetings are held every second Tuesday of the month, which also holds true for the date Nicolas scheduled the forum.

“It is the only day that I would not be able to attend. Had I been asked or given the chance to state that, I would have asked to have it on any other day,” McKenzie said. “This is not an ‘emergency meeting’ of the school board where we may have very little time to act on something.”

Voisine said she also had a prior commitment that kept her from participating in the candidates’ forum, but encouraged voters to reach out to her with any questions they may have.

Fort Kent residents will vote for the SAD 27 candidates from 8:30 a.m. to 5:30 p.m. Monday, March 28, at the Fort Kent town office. The election hours were previously scheduled to begin at 10 a.m.

WFKTV Channel 4 broadcast the candidates’ forum in real time, and recordings of the event are available on the Channel 4 Facebook and YouTube pages.

The Aroostook County Republican Committee will hold their election year County-wide caucus from 9 a.m. to noon on Saturday, Feb. 12, at the Presque Isle Inn & Convention Center.
Our Sponsors END_OF_DOCUMENT_TOKEN_TO_BE_REPLACED