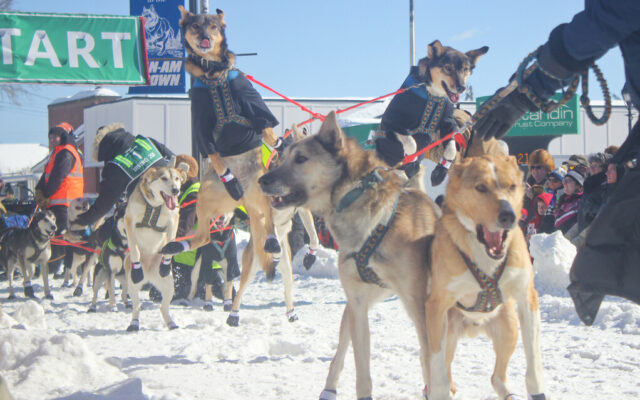 Emily Jerkins, • March 10, 2022
The 2022 Can-Am Crown celebrated a successful 30th year when the races came to an official close Tuesday afternoon with an awards ceremony after an unforgettable weekend.

FORT KENT, Maine — The 2022 Can-Am Crown celebrated a successful 30th year when the races came to an official close Tuesday afternoon with an awards ceremony after an unforgettable weekend. 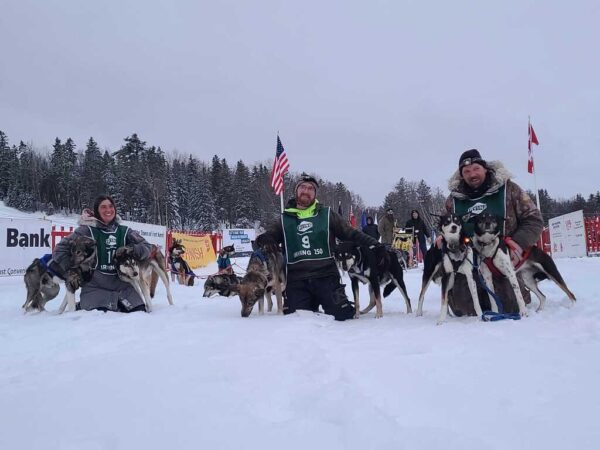 The top three mushers came in within 10 minutes of each other Monday morning in the Can-Am Crown International Dog Sled Races 250-mile race. They were (from left), Erin Altemus in third, Wade Morrs in second and Denis Tremblay was first. (Credit: Emily Jerkins | St. John Valley Times)

Mushers for all three races took off from Main Street in Fort Kent Saturday morning cheered on by the largest crowd the Can-Am Crown has seen to date, according to Can-Am President Dennis Cyr. Mushers in the 30-mile race crossed the finish line Saturday afternoon, while the 100-mile race concluded Sunday. The last musher to cross the finish line in the 250-mile race, Gilles Harnois, came in around 2 a.m. Tuesday.

An awards ceremony was held at the Knights of Columbus Hall in Fort Kent Tuesday evening where people across the board that were involved with the Can-Am came to celebrate the efforts of the mushers and crew that keep the sled dog races going year after year.

Inside the Knights of Columbus Hall, Steve Daigle provided ceremony goers with a classic turkey dinner over mashed potatoes, stuffing, carrots and beans. Once everyone had a meal before them, President Dennis Cyr addressed the crowd.

“This year has been a good year for the sled dog race, the weather cooperated through two-thirds of the race and then we got that rain,” Cyr said. “We got all the mushers back to Fort Kent safely. It’s been two years since we had our last race. The Can-Am board of directors changed considerably. We’re actually 16 directors now and 14 advisers so that makes 30 people behind the scenes just doing the coordination of the race, and of course, we had 100 volunteers out on the racecourse during the race.” 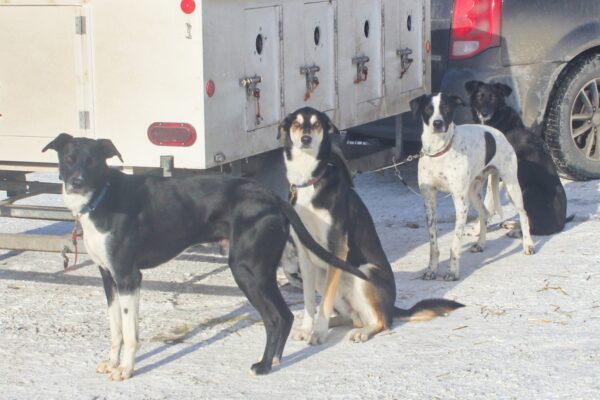 Some sled dog stars are ready for their close-ups as their owner checks in for the 2022 Can-Am Crown International Sled Dog Races, at Lonesome Pine Trails in Fort Kent. Credit: Jessica Potila / St. John Valley Times

One thing that set this year apart from other years was the online tracker, created by Bill Loder, that spectators and organizers could use to track each musher along the trail.

“That was probably the greatest thing we’ve ever done with the Can-Am in 30 years,” Cyr said.

This year the first three mushers to complete the 250-mile race crossed the finish line within 5 minutes of each other. Denis Tremblay came into the finish at 5:45 a.m. with Wade Marrs hot on his heels crossing only a minute after Tremblay. Erin Altemus made her way into Lonesome Pines while Tremblay and Marrs were still winding down with their team at the finish line resulting in a nail-biting finish.

The National Guard helped out with the Can-Am this year at the Rocky Brooke checkpoint.

“I think more National Guard people were helping out with the Can-Am than they are over in the Ukraine right now,” Cyr said. “I think only Can-Am can pull that off.” 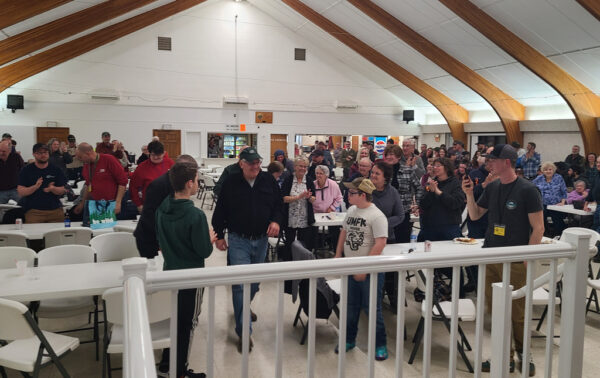 Jimmy Dumond walks to the stage through a standing ovations to receive his award in recognition of his 27 years spent working with the Can-Am Crown International Sled Dog races in Fort Kent on Mar. 8. (Emily Jerkins | St. John Valley Times)

After Cyr addressed the people at the ceremony, Sarah Brooks was invited on stage to give out a special award to one of Can-Am’s founders, Jimmy Dumond.

“For 27 years, Jim has been the instrumental person for developing the trail system that the 250-mile racers go on,” Brooks said. “If it wasn’t for Jim, we probably would have gotten lost a few times way out there, no doubt about it — I can’t think of anybody who deserves more recognition with the Can-Am than Jim Dumond does.”

After Dumond’s recognition, co-race marshals John Coletta and Gavin Baker hit the stage to hand out awards for the Can-Am 250-mile race.

Gilles Harnois was the last musher to cross the finish line and was awarded the Can-Am’s red lantern, which signifies a musher, alone on the trail, determined to make it to their destination. Erin Altemus was awarded a third-place trophy, Wade Marrs with second, and Denis Tremblay with first.

An earlier version of this story contained an incorrect spelling of a name. Bill Loder created the online tracker for the Can-Am 250. 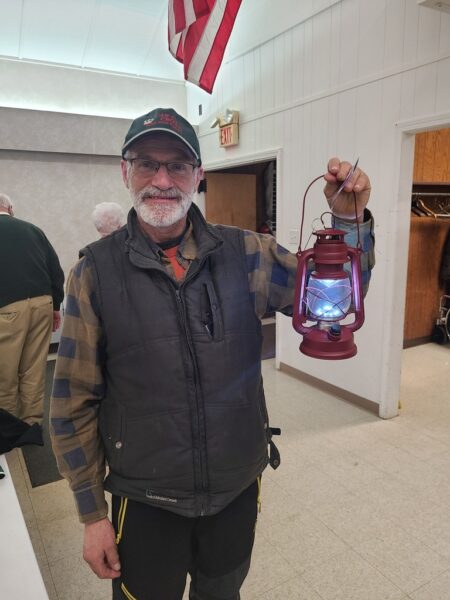 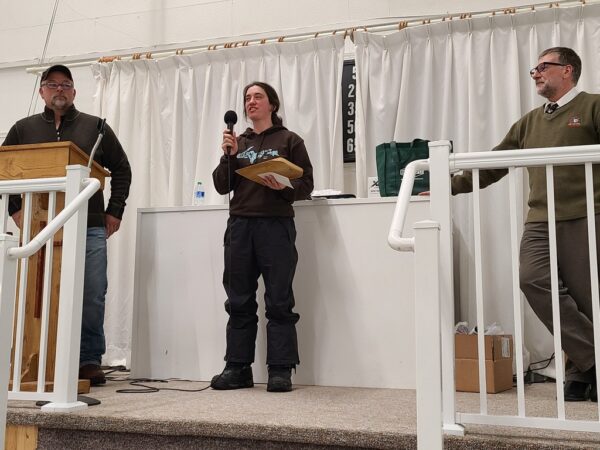 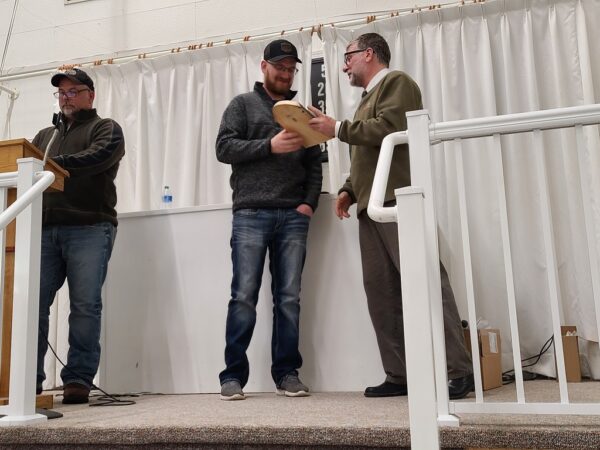 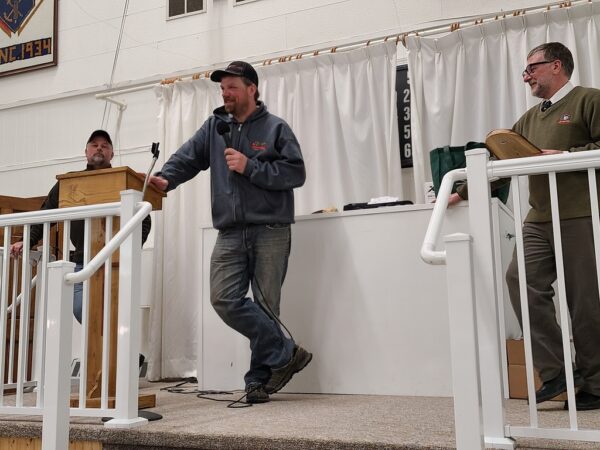 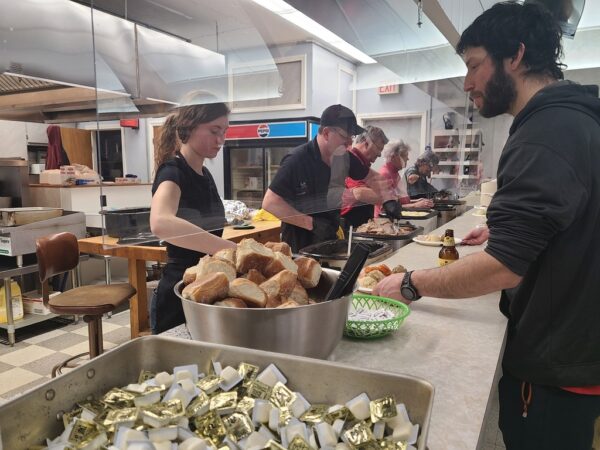 The Can-Am Crown 250-mile race awards were catered by Steve Daigle and his crew, serving over 100 people in attendance at the Knights of Columbus Hall in Fort Kent on Mar. 8. (Emily Jerkins | St. John Valley Times)

Cloudiness in the region Thursday afternoon along with a slight chance for isolated showers Thursday night and Friday.
Crown Politics END_OF_DOCUMENT_TOKEN_TO_BE_REPLACED