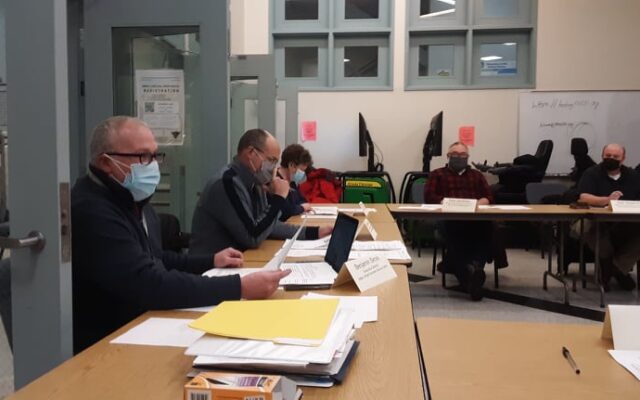 Staff Fiddlehead Focus • January 13, 2022
The Valley Unified Board of Directors discussed its governance structure Wednesday evening and whether to reduce how long the three St. John Valley educational partners must remain in the group they formed four years ago.

by Emily Jerkins and Jessica Potila

FRENCHVILLE, Maine — The Valley Unified Board of Directors discussed its governance structure Wednesday evening and whether to reduce how long the three St. John Valley educational partners must remain in the group they formed four years ago.

SAD 27 (based in Fort Kent), SAD 33 (based in Frenchville) and Madawaska School Department formed the Valley Unified Education Service Center with an interlocal agreement in 2018. The idea was to build a regional high school in the St. John Valley to address declining enrollment and rising costs in their individual schools. It was to be the state’s pilot project to show other rural areas what they could do to address the same issues.

The Maine State Board of Education voted to remove the St. John Valley project from its list of approved school construction projects last February when the Valley Unified board failed to agree by a state-imposed Dec. 21, 2020, deadline on how to form a regional school unit to govern the partnership. They also were still disputing the location of the school.

Valley Unified Executive Director Ben Sirois offered two proposals for a service center governing body based on cost share between the school administrative districts during discussions Wednesday. SAD 27’s share is approximately 50 percent,  while Madawaska’s is 33 and SAD 33 at roughly 17.

For a 10-member board, Sirois said that SAD 27 would have to select five representatives, Madawaska three and SAD 33 two.

“SAD 27 has a board of seven,” Sirois said. “If they are going to appoint five to this board, that’s almost their entire board. I don’t know if they are willing to do that. If they are, great. If not then that’s going to be a problem.”

Alternatively Sirois proposed a smaller board of six members in which SAD 27 would select three representatives, Madawaska two and SAD 33 one. Sirois said he understood that being the sole member representing SAD 33 may not be advantageous, and opened the topic for discussion.

SAD 27 representative Toby Jandreau suggested a weighted vote in which each district would meet on certain issues and have their representatives bring their votes to the Valley Unified board.

“There are other RSUs that operate with what Toby was talking about,” Sirois said. “Instead of stacking your board with so many reps, the board member comes to the table with a representative percentage of their vote.”

The board also addressed the issue of how long the Valley Unified partnership should last now that the regional high school is off the table. The interlocal agreement set the term of the Valley Unified Education Service Center at 25 years.

The earliest a member may withdraw from Valley Unified is 2043, and only if all debt obligations to the regional service center have been paid in full, according to the agreement. Even then, it would require a two-thirds vote from the remaining members to approve the withdrawal.

Madawaska School Department and SAD 27 indicated at Wednesday’s meeting that they would like to shorten the term of the arrangement.

Jandreau said the SAD 27 board requested the Maine Legislature draft language to allow education service center partners to withdraw from such an arrangement with a one-year notice.

Although the Legislature has not yet addressed the proposed change, Jandreau said his board is open to a Valley Unified term longer than one year, but far less than 25 years, if the Valley Unified board can come to an agreement.

“I think the option to leave (Valley Unified) is going to take a lot of the pressure off,” Jandreau said. “I think if there was a pathway out, there would be a better chance we would stay.”

Joshua Desjardin of SAD 33 and Robert Poiesz of Madawaska School Department indicated their respective boards would be open to reducing the term of the arrangement.

The Valley Unified partnership is beneficial even without a new school because its primary function is shared services, Sirois said.

The Valley Unified partners share administrative costs, including Superintendent Sirois, with 50 percent of his salary reimbursed by the state as long as the regional service center continues.

The SAUs also share a food service director, curriculum coordinator, innovative programs and community outreach coordinator services, plus a Powerschool information system for which they receive a discount from the Department of Education.

Sirois suggested a five-year term for the partners, citing practical and budgetary issues related to maintaining or removing these services should the arrangement be altered.

Jandreau requested more information about the terms of each of the shared services, which Sirois agreed to present at the next Valley Unified meeting.

Board members agreed to table any decisions until all districts have had the chance to discuss the changes with their own committees. Acknowledging that not all districts will meet before the budgetary session scheduled for 6 p.m. on Monday, Jan. 31, in Madawaska, Sirois suggested the votes take place at the following meeting in Fort Kent, the date of which has yet to be determined.

A cold front will approach tomorrow with a chance for snow showers through the day into the evening. The front is expected to move through tomorrow night with another Arctic air mass.
Crown Politics END_OF_DOCUMENT_TOKEN_TO_BE_REPLACED

Three candidates are vying for two seats on the Fort Kent Town Council. Voters will decide which of the three -- Corey Pelletier, Brandon Dayton or Andrew Caron -- will get a seat during the town’s annual election on Monday, March 22.
Our Sponsors END_OF_DOCUMENT_TOKEN_TO_BE_REPLACED