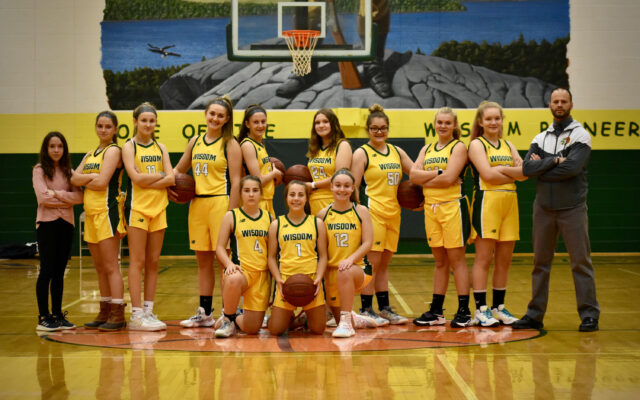 Wisdom girls are young team with chemistry and work ethic

Jessica Potila, SJVT / FhF Staff Writer • January 5, 2022
The Wisdom Pioneer girls basketball team is young, but has key strengths they will rely upon this season.

ST. AGATHA, Maine — The Wisdom Pioneer girls basketball team is young, but has key strengths they will rely upon this season.

The small Class D Wisdom Middle/High School often draws on young players for athletics, and this year includes three 8th graders and only one senior.

“We do have skilled players at every position,” Coach Scott Pelletier said. “I think our team chemistry is great and we have a group of girls that work really hard.”

Pelletier, who is also the district athletic director, has a dozen years of experience coaching high school varsity basketball. He is in his fifth year of coaching the Pioneer girls and has also coached the Wisdom Pioneer boys for five years and Fort Kent Community High School Warrior boys for two years.

The Wisdom girls maintained a near perfect record last year at 10-1, during a season cut short by COVID-19 which resulted in a modified playoff format. The team beat Washburn High School in the Aroostook County Small School semifinals before falling to Southern Aroostook Community School in the Division II finals.

Pelletier said he would like to see a regular season this year where the Pioneer girls can compete at the state level against a variety of opponents. “We’re hoping to continue our upward trend and make a deep run in Bangor,” Pelletier said.

In seeking this goal, Pelletier said he will encourage the Pioneer girls to improve on all aspects of the game throughout the season, both on defense and offense.

“We hope to carry the motto of ‘Fear None, Respect All,’” Pelletier said. “We want to be fearless, but not careless. I want to play smart basketball where we limit turnovers and not commit fouls when we pressure teams.”

In that vein, Pelletier said he counts Southern Aroostook, Katahdin High School and Fort Fairfield High School among the Pioneer’s top competitors this season, but is not taking any contender for granted.

“It will be important to stay focused and prepared for each of our opponents,” Pelletier said.

The Pioneers lost two seniors to graduation last spring, Emma Chamberland and Savanna Hanlin. “Both played a significant role on the team last year,” Pelletier said. “I’m hoping for this team to have a successful season with the core group from last year returning.”