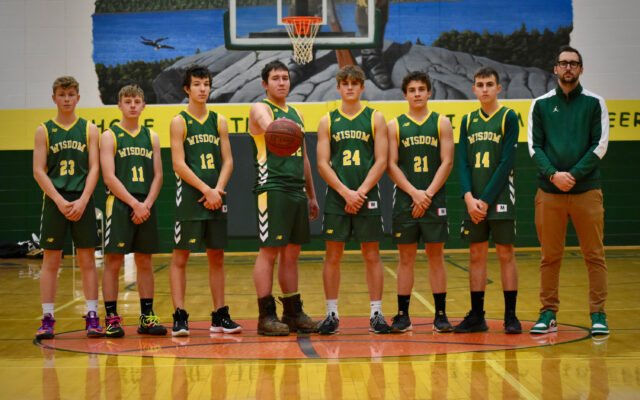 Jessica Potila, SJVT / FhF Staff Writer • January 5, 2022
With most players on the Wisdom boys basketball team returning this year, the Pioneers are looking forward to what is hoped to be a competitive season in Class D North.

ST. AGATHA, Maine — With most players on the Wisdom boys basketball team returning this year, the Pioneers are looking forward to what is hoped to be a competitive season in Class D North.

And while the Pioneers may not have one of the larger squads, they certainly make up for it in talent.

“We’re going to be a small but quick team that should be able to turn teams over and score in transition, shoot well from the outside, as well as attack the basket,” Coach Dom Rossignol said.

“Carter, Camden, and Dom will be my starting guards, with a combination of Kaden, Connor, and Logan in the front court, though we’ll have to see what we have in the other newcomers,” Rossignol said. “Carter and Camden will be my primary ball-handlers, Camden being more of a pure point guard, Carter a combo guard who can create for himself or others, shoot from the perimeter, or get to the basket.

“Dom is our best pure shooter who’s growing the rest of his game, very quick in the open court, and a good rebounder for his size due to his athleticism,” the coach added. “Kaden and Connor are strong rebounders and post players, and Logan is a quick, athletic wing who will usually draw the defensive assignment of the other team’s best scorer.”

In his second season as head coach of the Wisdom boys, Rossignol has plenty of experience with other programs. He assisted with coaching the Fort Fairfield boys, Fort Kent boys and Van Buren girls in previous years.

Rossignol said his major focus for the Pioneers this year will be improving on their zone offense.

“More teams played zone defense against us last year than we expected and we weren’t as prepared for it as we should have been,” Rossignol said.

The Class D North Wisdom boys are prepared to take on any opponents, but consider one team to be their greatest challenge this season.

“I’m not really sure what to expect from most of the teams on our schedule, as we only played a few last year in the COVID-shortened season, but Fort Kent, though they’re in Class C, will probably be the best team we play,” Rossignol said.

Canadian high pressure building down from the northwest sends us some more frigid air for the late week period.
Crown Politics END_OF_DOCUMENT_TOKEN_TO_BE_REPLACED

Three candidates are vying for two seats on the Fort Kent Town Council. Voters will decide which of the three -- Corey Pelletier, Brandon Dayton or Andrew Caron -- will get a seat during the town’s annual election on Monday, March 22.
Our Sponsors END_OF_DOCUMENT_TOKEN_TO_BE_REPLACED