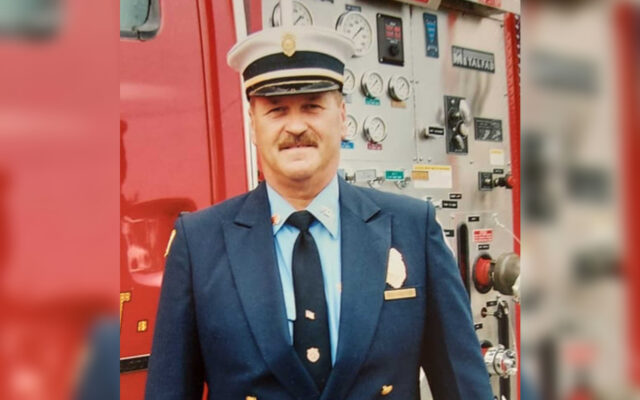 Jessica Potila, SJVT / FhF Staff Writer • January 4, 2022
A former St. Agatha fire department chief who served as a volunteer firefighter for many years until learning he had cancer last summer has died from the disease.

ST. AGATHA, Maine — A former St. Agatha fire department chief who served as a volunteer firefighter for many years until learning he had cancer last summer has died from the disease.

In his 72 years of life, Gerald “Ricky” Chamberlain served the community and left the impression of a man who genuinely cared about others.  Chamberlain died Dec. 21, 2021.

Chamberlain had served as a volunteer firefighter since 1977, was St. Agatha fire chief from 1990 to 1995 and was the town fire warden for 24 years. He was respected for his knowledge about firefighting, according to now St. Agatha Fire Chief Bob Guerrette.

It was Chamberlain who encouraged Guerrette to join the department back in 1995.

“Just being around him, his knowledge really inspired all the young guys that would join the department,” Guerrette said. “Ricky was greatly respected by all of us on the department. When he spoke, everyone listened.”

Chamberlain also will be missed for another skill he managed to perfect over the years.

Chamberlain volunteered for the K of C as well as American Legion, and served four years in the Maine National Guard.

“He was an awesome person – was always willing to help anybody out,” Guerrette said .

“He was just an all around great person. I never met anybody that didn’t like him.”

Tammy Bouley met Chamberlain when working at a credit union with his wife of 47 years, the late Mary Ann Chamberlain.

Bouley recounted how Ricky Chamberlain was charged with clearing the credit union parking lot as a foreman for public works.

“But, of course Rick always went over and beyond – he’d wait until it was close to closing time and clean the driveway, start all our vehicles, clean them off and shovel the ramp coming up to the doorway for us,” Bouley said. “He’d always say, ‘Of course, I’m gonna take care of you girls.’ God, I loved him.”

“He was like this all the time. No matter what organization he was with or what he was doing,” Bouley said.

The 26-member St. Agatha Fire Department will mourn Chamberlain’s passing for some time to come.

“We’re taking it very hard. He was a beloved member and will be extremely missed,” Guerrette said.

Three candidates are vying for two seats on the Fort Kent Town Council. Voters will decide which of the three -- Corey Pelletier, Brandon Dayton or Andrew Caron -- will get a seat during the town’s annual election on Monday, March 22.
Apex Weather END_OF_DOCUMENT_TOKEN_TO_BE_REPLACED

A trough will keep plenty of clouds across the Valley today along with a slight chance for precipitation. Mostly cloudy skies continue overnight as a low pressure area over the Mid-Atlantic tracks into the Gulf of Maine and strengthens as it moves from Cape Cod to Nova Scotia.
Our Sponsors END_OF_DOCUMENT_TOKEN_TO_BE_REPLACED