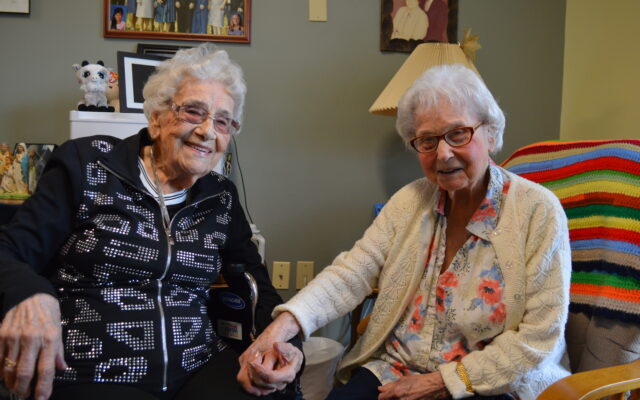 Jessica Potila, SJVT / FhF Staff Writer • December 28, 2021
Although COVID-19-related stories often dominated the headlines, there was plenty of other news to report as St. John Valley towns continued to function and community members managed to accomplish great things in spite of the virus.

Editor’s Note: The following is the first of two articles highlighting some of the top news stories from 2021. This article highlights events from January to June. The second installment will appear in the Jan. 5 issue.

Although COVID-19-related stories often dominated the headlines, there was plenty of other news to report as St. John Valley towns continued to function and community members managed to accomplish great things in spite of the virus. 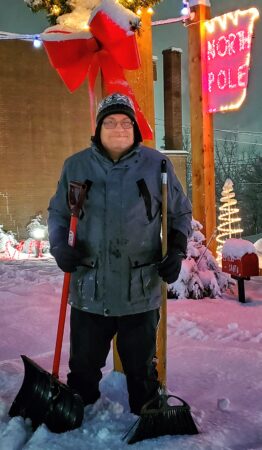 Dan Thibodeau of Madawaska volunteers his time to clear snow from stairs and walkways at some Main Street businesses. (Courtesy of C Meshow Photo)

Two of the three school administrative units comprising Valley Unified Education Service Center sent letters to the Maine Department of Education requesting it extend a deadline that would end efforts to build a state-funded regional school in the St. John Valley. SAD 33 and Madawaska School Department sought to maintain the embattled school project.

Northern Maine Medical Center was swamped with calls when it opened its dedicated phone line for the public to register for COVID-19 vaccinations. People from all around the state – and even from out of state –  were calling to register.

Nursing homes in Caribou, Madawaska and Eagle Lake reported significant recoveries following COVID-19 outbreaks, which began the week before Christmas and took the lives of 14 residents.

A Madawaska man performed a free community service by shoveling snow from the steps and walkways of local businesses. Dan Thibodeau said he enjoyed the exercise and just wanted to help others.

Students attending Fort Kent Community High School and Valley Rivers Middle School moved back to a remote learning model after one student at each of the schools tested positive for COVID-19. The students had previously been in remote learning prior to the Christmas break.

A Fort Kent garage housing a tractor trailer truck was a total loss to fire, but volunteer Fort Kent firefighters were able to prevent the fire from destroying nearby structures.

Tylor and Leitha Kelly in the kitchen of their Allagash home. (Courtesy of Darlene Kelly Dumond)

Lynn (Leclerc) Gierie was named 2021 Maine Mother of the Year by American Mothers, Inc. LeClerc and her husband founded a non-profit organization to help families purchase supplies to improve the lives of children with developmental disabilities. Robbie Foundation is named after the couple’s son, who lives with cerebral palsy.

An Allagash couple married for 62 years celebrate being inseparable Valentines. Tylor and Leitha Kelly are the parents of five children, 12 grandchildren and 10 great-grandchildren.

The Maine State Board of Education voted to remove the Valley Unified Education Service Center Project from the state’s major capital school construction approved projects list, eliminating the possibility of a new regional school in the St. John Valley.

The U.S. General Services Administration awarded the Billerica, Massachusetts-based J&J Contractors, Inc. the $44,507,000 contract to build the new land port of entry for the Madawaska International Bridge that is under construction. The port of entry project, happening concurrently with the International Bridge project, is intended to provide the residents of Madawaska, Maine, Edmundston, New Brunswick, and the entire region, a long-term, safe and efficient flow of current and projected traffic volumes, including the movement of goods and people between the neighboring communities, the GSA said. 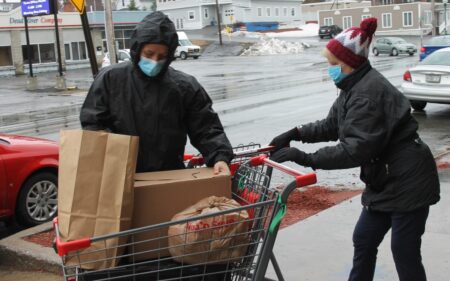 Frenchville town manager Ryan E. Pelletier resigned from the position after serving the town for six years. Pelletier went to work at the construction business his grandfather founded, Ed Pelletier & Sons Co., as a project manager and estimator.

Sadie Cairns, then an eighth-grader at Valley Rivers Middle School in Fort Kent, was  crowned champion of the 2021 Aroostook County Spelling Bee.

The Madawaska Board of Selectmen officially launched the town’s app – a completely new way for the town and its residents to communicate. TownOfMadawaska is available for download on both iOS and Android devices and is a hub for all things Madawaska, with pages for all of the major town offices from public works to police and fire.

St. Agatha town manager Aubrey Michaud resigned from the position. The pandemic, in particular, changed the dynamic of Michaud’s relationship with the town. While she said St. Agatha residents were resilient in their businesses and lives, she felt there was a communication breakdown between the people and the town government. 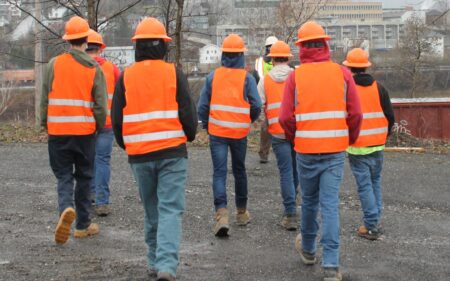 Frenchville hired David D. Cyr as town manager. Cyr has extensive experience in public service, including more than six years as town manager of Mars Hill, having served as public works director for the Aroostook Board of County Commissioners for the Unorganized Territories, and as a three term member of the Woodland Board of Selectmen.

St. Peter Chanel Pantry Director Nancy Dumond Violette and other volunteers performed the pantry’s food distribution by walking up and down sidewalks delivering food to those in need. The curbside delivery method had been in place for a year, due to the COVID-19 pandemic.

Fort Kent Police Officer Jack Maloney helped to save the life of a woman who suffered from a medical problem. The young officer helped to revive the 75-year-old woman at her Fort Kent residence.

Jason Nadeau was hired as the Fort Kent Parks and Recreation director. Nadeau filled the position previously held by Ann Beaulieu, who retired in December 2020 after 21 years of service to the greater Fort Kent community.

Northern Maine Ice Busters last carved a 27-acre circular disc with a diameter of 1,234 feet out of the Long Lake ice and made it spin to recapture the World Championship Ice Carousel Record. Hundreds gathered at the St. Agatha boat landing to witness the world record event. 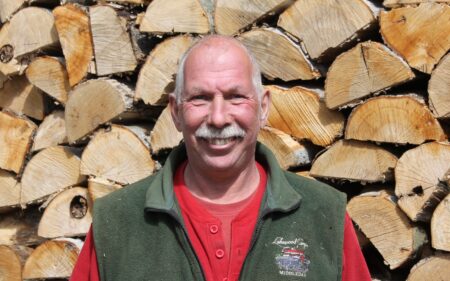 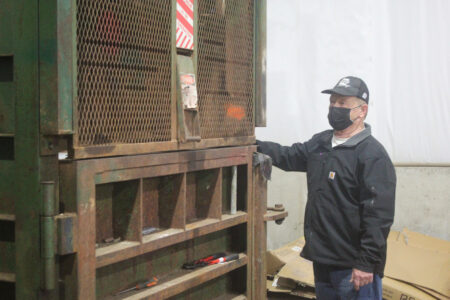 Madawaska selectman Dan Daigle hired a lawyer and considered taking legal action against the town over a $114 personal property tax bill from 2020 he said was illegitimate. The taxes were on the furnishings of the cabin-rental business Daigle owned for 13 years, The Other Maine. Daigle disputed the tax bill because he shut down his operation on March 25 following Gov. Janet Mills’ executive order closing businesses to prevent the spread of COVID-19, which was also several days before the April 1 start of the 2020 tax year.

A team of Fort Kent Community High School freshmen and sophomore students were named Aroostook County Battle of the Books champions. The students defeated Washburn in the final round to win the high school division of the competition, which Aroostook Regional Gifted and Talented sponsored.

The Northern Aroostook Solid Waste Association transfer station in Eagle Lake announced it was accepting recyclables to reduce solid waste costs and help the environment at the same time. The NASWA is a collective of five member communities — Eagle Lake, Wallagrass, New Canada, Winterville and the unorganized territory of Township 15 Range 6.

Fire destroyed a Madawaska apartment complex housing 11 people. The community quickly sprang into action to help those displaced by the fire, which claimed the lives of several pets.

The Madawaska Board of Selectmen unanimously voted to designate Chapel Road “Kirk Minihane Way for the Day” after Boston sports radio personality Kirk Minihane. The radio personality was planning to visit Madawaska to host a live edition of his podcast, “The Kirk Minihane Show.” The board of selectmen’s temporary resolution was a compromise on an original request to permanently rename a street in Minihane’s honor. 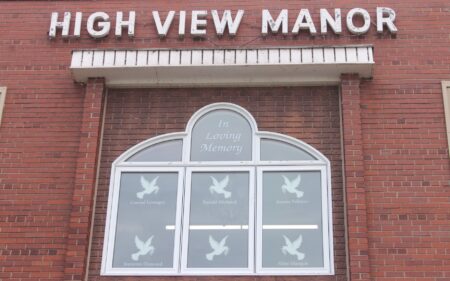 A window commemorating the lives of High View residents who passed due to COVID-19 adorns the front facade of the care facility (Hannah Catlin | St. John Valley Times) 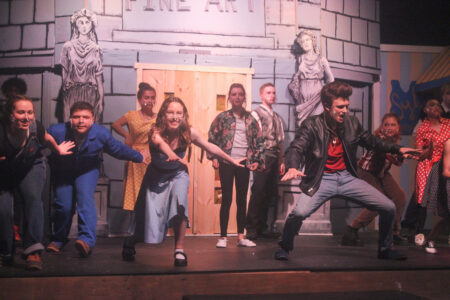 The Fort Kent Community High School cast of ‘All Shook Up’ shakes things up on the stage during a dinner theater performance of the musical. (Jessica Potila | St. John Valley Times)

A Madawaska nursing home installed a memorial window for residents lost to COVID-19. The arced three-pane window etched with six doves marked the memory of six High View Manor residents who died as a result of the virus.

A two-vehicle crash on Caribou Road claimed the life of one driver and resulted in severe injuries for the other. Kelsey Jane Whitely died, leaving behind a husband and two young children. Chantal Hayes, a mother of three, would undergo numerous surgeries and remain hospitalized for many months before being transferred to a rehab facility where she would remain throughout the year.

Fort Kent Community High School students performed the musical “All Shook Up,” inspired by the music of Elvis Presley. The dinner theater production sold out all 75 seats at three shows.

Podcaster Kirk Minihane and around 150 followers of “The Kirk Minihane Show” gathered in Madawaska, where they received a cold welcome from local residents. Two weeks earlier, Minihane, upset that Madawaska refused to permanently name a street after him, threw away a key to the town he was given during a previous visit. The controversy made national news headlines.

Madawaska residents voted narrowly for the town to become a Second Amendment sanctuary. It became the sixth Aroostook town to adopt such a resolution and the first to do it via town meeting.

Childhood neighbors Maria (Deschaine) Beaulieu and Eva (Caron) Deschaine met up in Fort Kent to reminisce about old times. The two ladies were both 105 years old at the time of their visit. A century of time had scarcely elapsed for the two friends who clearly enjoyed catching up on many memories.

A house in Fort Kent was intentionally targeted in a drive-by shooting, police said. Four rounds were shot from a handgun by someone in a moving vehicle into a house on Violette Settlement. A man and a woman were in the house at the time of the shooting, and no one was injured.

Cloudiness in the region Thursday afternoon along with a slight chance for isolated showers Thursday night and Friday.
Crown Politics END_OF_DOCUMENT_TOKEN_TO_BE_REPLACED

The Aroostook County Republican Committee will hold their election year County-wide caucus from 9 a.m. to noon on Saturday, Feb. 12, at the Presque Isle Inn & Convention Center.
Our Sponsors END_OF_DOCUMENT_TOKEN_TO_BE_REPLACED