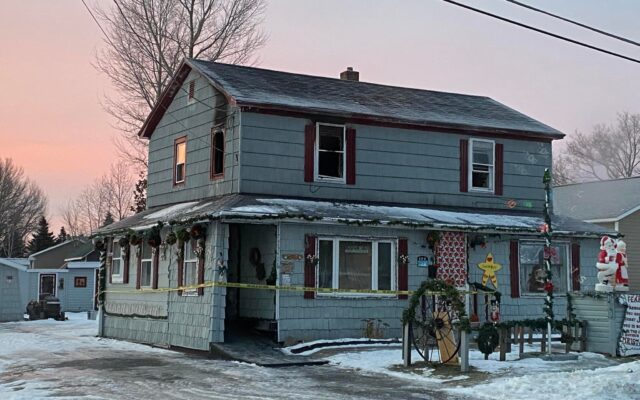 Firefighters from Van Buren and Grand Isle responded to a fire call at 109 Champlain St. where there were reports of a person on the roof at 12:15 a.m. At the time of the call, it was unclear as to whether any others might still be inside the burning structure.

Responders rescued the person from the porch roof of the home upon arrival, as flames engulfed the second floor. They then learned that the other two people had fled the home safely. Firefighters were also able to safely remove the family’s dog and cat from the home and had the fire under control by 1 a.m.

Temperatures dipped as low as  minus 6 degrees Fahrenheit, creating challenges for firefighters.

“You’re putting out a fire on the roof that is now icing over,” Van Buren Fire Chief Brian Caron said. “The guys have to hang on for their life to stay on the roof.”

In these frigid conditions, firefighters had to keep an eye on their fire hoses just to make sure water kept flowing and nothing froze. Once the fire was put out, the highway department was called to salt the roads due to the amount of ice that accumulated there.

Caron said the fire was likely caused by improper use of extension cords, and warns people to use caution when decorating for the holidays.

“People have to realize plugging in Christmas lights back to back, the kind of thing you see on Facebook, shouldn’t be done,” Caron said.

There were no casualties resulting from the house fire, but the person who was on the roof was taken by ambulance to Cary Medical Center to be treated for smoke inhalation. While the home is still standing, there is major fire damage to the second floor and water damage to the first floor.

The Red Cross is assisting the people who lost their home.

Cloudiness in the region Thursday afternoon along with a slight chance for isolated showers Thursday night and Friday.
Crown Politics END_OF_DOCUMENT_TOKEN_TO_BE_REPLACED

The Aroostook County Republican Committee will hold their election year County-wide caucus from 9 a.m. to noon on Saturday, Feb. 12, at the Presque Isle Inn & Convention Center.
Our Sponsors END_OF_DOCUMENT_TOKEN_TO_BE_REPLACED