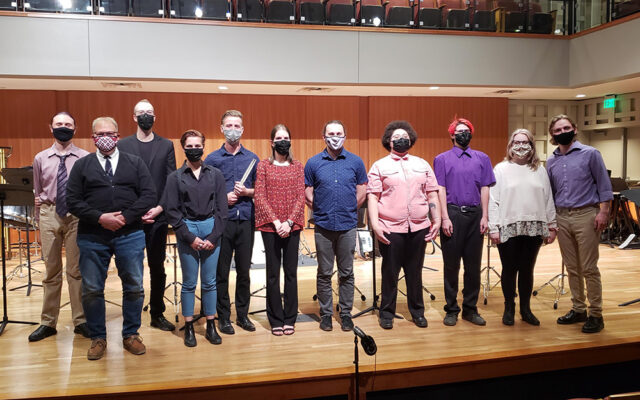 Contributed • December 8, 2021
The University of Maine at Fort Kent is pleased to announce that Dr. Scott Brickman’s composition recently received its first live performance in the U.S. since COVID began.

FORT KENT, Maine – The University of Maine at Fort Kent is pleased to announce that Dr. Scott Brickman’s composition recently received its first live performance in the U.S. since COVID began.

On Nov. 9 the Western Colorado University Percussion Ensemble premiered Brickman’s Saule (2020) as part of their “Rain or Shine” concert on the campus of Western Colorado University in Gunnison, Colorado. Additionally, the first movement of his Symphony #5 released on the Navona label (NV 6369) of Parma recordings, based in New Hampshire, on Oct. 22.

Saule, for 6 percussionists is based on two rather antithetical types of materials, first the Bach Chorale Herr Christ, der ein’ge Gott’s sohn, and second, asymmetrical rhythmic patterns found in Latvian folksongs. The word “Saule” means Sun in Latvian. According to Latvian pagan mythology the image of the Sun represents not only harmony, health, unity, safety, and of course light, but also the eternal, all knowing and protecting, returning, and repeating.

Symphony #5 was written in part at the suggestion of Parma CEO Bob Lord. In three movements, most of it was conceived and sketched during 2019 when Brickman was in the Czech Republic and Latvia. The inspiration was his experience with Latvian culture, learning Latvian folk dances and songs. Additionally, certain decorative patterns of Latvian linen arts which have a relation to the songs and dances served as an inspiration.

Brickman’s Symphony #5 was recorded by the Zagreb Philharmonic Orchestra, Ivan Skender conducting, in March of 2021. Brickman witnessed the recording sessions via Zoom. A complete release of his entire Symphony is planned for a later date.

“Being able to work with students in live rehearsals and sit in an audience and hear my music performed live after not having done so for two years was surreal,” says Dr. Brickman. “I’m grateful for the internet performances my music has received during COVID, and the live performance I had had but been unable to attend, but nothing compares to the old, complete package experience. I thoroughly enjoy interacting with audience members and the public and look forward to being at more live performances in 2022.”

Dr. Brickman holds music degrees from the University of Wisconsin and Brandeis University. He has taught at UMFK since the fall of 1997. His orchestral music has been performed in Croatia, Czechia, Moldova, Poland, and Ukraine. Professional recordings of his music are available on iTunes, Amazon, Spotify, and other digital platforms, and through hard copies primarily but not exclusively on the Parma and Phasma labels.

Canadian high pressure building down from the northwest sends us some more frigid air for the late week period.
Crown Politics END_OF_DOCUMENT_TOKEN_TO_BE_REPLACED

Three candidates are vying for two seats on the Fort Kent Town Council. Voters will decide which of the three -- Corey Pelletier, Brandon Dayton or Andrew Caron -- will get a seat during the town’s annual election on Monday, March 22.
Our Sponsors END_OF_DOCUMENT_TOKEN_TO_BE_REPLACED