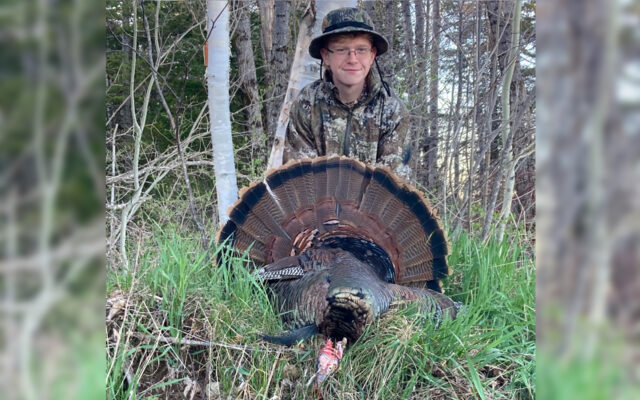 Bill Graves, Special to the Fiddlehead Focus • November 26, 2021
Anyone who’s a baseball fan understands how rare and exciting a grand slam can be. Here in Maine we have a different type of grand slam.

Anyone who’s a baseball fan understands how rare and exciting a grand slam can be. With the bases loaded, a batter hits a home run to score four runs. It’s a memory for a lifetime. During a recent playoff series trying to earn a spot in the World Series, New England’s favorite team, the Red Sox, actually set a record. Since statistics have been kept for baseball, the Sox are the first team to ever hit three grand slams in a series.

Here in Maine we have a different type of grand slam. It happens when a hunter shoots and tags four different species of big game animal, and it’s difficult to accomplish. Up until a few years ago, Aroostook sportsmen couldn’t even accomplish this coup without traveling downstate to bag a wild turkey. A successful transplant program solved that hurdle, and now zone 6 hunters have an opportunity to shoot a gobbler during spring and fall seasons.

For prospective grand slammers, the most daunting hurdle is winning a permit in Maine’s annual moose lottery. The odds are abysmally low. Nonetheless there are a number of sportsmen and women each June who are selected as permittees or subpermittees, and foremost in some of their minds is the fact that the door to grand slam success is now unlocked. Smart, determined hunters with a dream and a goal don’t just sit around and wait and hope for a June miracle. They put their plan in motion. 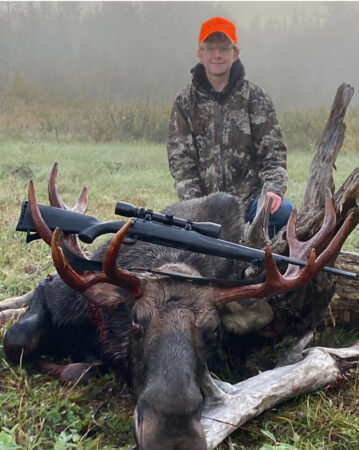 Trey Brewer with his 734-pound moose, part two of the young sportsman’s grand slam. The feat is not an easy one, requiring a hunter to bag four different big game species. (Courtesy of Bill Graves)

Trey Brewer, a 15-year-old Easton High School student and avid outdoorsman, got right down to business on youth day of spring turkey season. He and his dad were set up well before dawn, and spent a long morning calling, coaxing and clucking with a couple of tom turkeys that came looking but never quite got within shotgun range. Patience and perseverance paid off that afternoon during a hunt in Mapleton, however, when a 20-pound gobbler with an 8 1/2-inch beard and long spurs strutted into the decoys.

Having hunted with his dad since age 7 for various game, Trey has accumulated a good deal of experience. Since age 10 he has bagged six wild turkeys in southern Maine before there were any in Aroostook, and his recent one was his fourth in The County. During that five-year period, Trey also put four deer, three bear, a moose and a lot of partridge in the family freezer as well as earned his trapping license.

Several years ago I began calling the all-day June lottery fiasco MooseMainea. Once onsite festivities were over, winners were all selected, announced and listed online later that evening, and that’s when the Brewer clan began their celebration. Cell phones and landlines of friends and relatives came alive as news spread that Trey was the subpermittee on one of those so-difficult-to-win moose lottery licenses.

On day one of the early September season, the Trey team managed to call a moose into range, but passed on a shot, hoping for a larger bull. A big moose did answer the calling on Tuesday, showed himself just briefly, but the distance and heavy cover prevented a safe shot. Luck, skill and perseverance all came together at 6:20 one Wednesday morning, however, and phone lines were buzzing again with news of the young hunter’s big bull that dressed out at 734 pounds with a 37-inch rack. 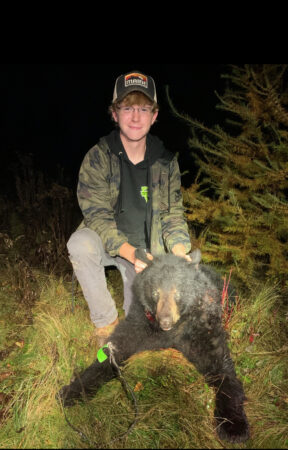 Bear season did not go as smoothly. With school work and intramural sports, Trey had limited time to spend at his bait site. It seemed when he was there the bear weren’t, and vice versa. There was a sow with cubs and a small bear that he had no interest in, and a couple of larger bruin only visited after dark. The bear baiting season closed out in late September without an opportunity for Trey to tag a bruin.

There’s more than one way to skin a cat, however — or in this case, a black bear. Trapping season for bear was still open, so the determined young outdoorsman constructed a baited snare setup for the first time in his life. He maintained and checked the cable trap frequently and dealt with the frustration of a platoon of raccoons that kept springing the setup. Perseverance paid off again and on Oct. 22 Trey bagged and tagged a 152-pound, thick-coated bear.

A lot of folks use the word lucky to describe certain outdoor experiences they have been part of. After over half a century of woods and waters, forests and fields, I prefer serendipity. One day after taking his bear, Oct 23 was youth deer hunting day, and Trey once again fired his tried and true 7mm-08 rifle. A 148-pound doe became the final corner piece of a grand slam puzzle that very few Pine Tree hunters are able to complete, especially a youth only halfway through high school.

Hunting and wildlife run a bit deeper in young Mr. Brewer’s mind and body. He has given serious thought to becoming a game warden. As for his outdoor future, one has to wonder what he can do to overshadow a Maine big game grand slam at such a young age.

In this writer’s opinion, Trey Brewer is just beginning a lifelong journey of enjoying, experiencing and passing on a great Maine tradition. By living, learning and teaching future generations the hunting heritage and sportsmanship of our state by example, there will be a lot of home runs in this young outdoorsman’s future. 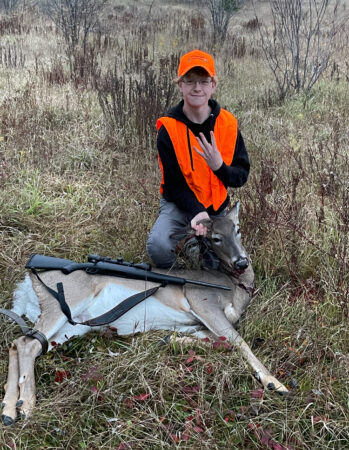 15-year-old Trey Brewer of Easton completed his hunting grand slam this year with this 158-pound doe. (Courtesy of Bill Graves)

A cold front will approach tomorrow with a chance for snow showers through the day into the evening. The front is expected to move through tomorrow night with another Arctic air mass.
Crown Politics END_OF_DOCUMENT_TOKEN_TO_BE_REPLACED

Three candidates are vying for two seats on the Fort Kent Town Council. Voters will decide which of the three -- Corey Pelletier, Brandon Dayton or Andrew Caron -- will get a seat during the town’s annual election on Monday, March 22.
Our Sponsors END_OF_DOCUMENT_TOKEN_TO_BE_REPLACED