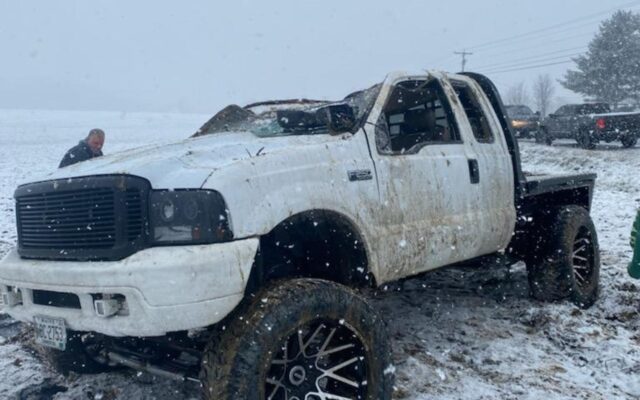 Jessica Potila, SJVT / FhF Staff Writer • November 16, 2021
Slush-covered roads resulting from the first winter snowfall in northern Maine were the cause of two crashes on U.S. Route 1 in Fort Kent on Monday.

FORT KENT, Maine — Slush-covered roads resulting from the first winter snowfall in northern Maine were the cause of two crashes on U.S. Route 1 in Fort Kent on Monday, Nov. 15.

At around 11 a.m., a Fort Kent teen was involved in a single-vehicle rollover crash near Thibeault Flats right before the Frenchville town line.

The 17-year-old driver was not injured, but his 2001 Ford pickup truck received disabling damage and was towed from the scene.

Poor road conditions caused the driver to lose traction in the roadway and he was unable to stop, Fort Kent Police Chief Michael DeLena said.

Sgt. Garrett Albert and Officer Michael Paradis went to the scene of the crash. As Chief DeLena was on his way to join them at the scene, DeLena witnessed another crash on the same road.

A FedEx cargo van, followed by a 2018 Subaru, noticed the flashing lights of DeLena’s police cruiser and attempted to pull over to allow DeLena to pass when the Subaru rear-ended the cargo van.

The driver of the Subaru, Phil Ouellette, 27, of Fort Kent, also lost traction due to slushy roads, DeLena said.

Ouellette and the driver of the cargo van, Roger Brown,59, of Houlton, were uninjured.

The Subaru received significant damage and was towed from the scene. The FedEx vehicle received only minor damage.

Three candidates are vying for two seats on the Fort Kent Town Council. Voters will decide which of the three -- Corey Pelletier, Brandon Dayton or Andrew Caron -- will get a seat during the town’s annual election on Monday, March 22.
Apex Weather END_OF_DOCUMENT_TOKEN_TO_BE_REPLACED

A warm front lifting across the region this morning will lead to increasing clouds with snow overspreading the area later this morning. A cold front will move through this afternoon with snow likely for a period before tapering off behind the front this evening with overnight lows occurring relatively early around midnight.
Our Sponsors END_OF_DOCUMENT_TOKEN_TO_BE_REPLACED