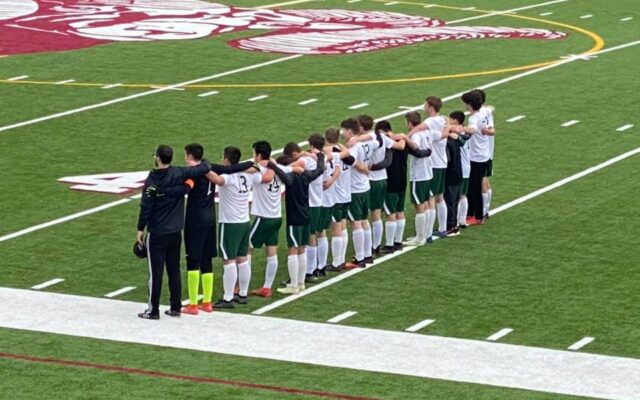 BANGOR, Maine — With two goals apiece by brothers Carter and Camden Pelletier the No. 4 Wisdom boys managed a 4-3 upset over No. 1 Bangor Christian in a Class D North semifinal played Saturday in Bangor.

“It meant a lot to win down there because it felt very much like it was us against the world, so there’s an extra sweetness about overcoming so much,” Wisdom Coach Dom Rossignol said.

The Pioneers 15-2 will take on undefeated No. 2 Lee Academy in the Class D North regional championship game 6:30 p.m. Tuesday in Presque Isle.

“We play Lee in the Northern Maine final, and we know it’ll be a battle as we know they’re a very talented team who just beat a Van Buren team that we respect a lot 6-0,” Rossignol said. “So we’ll have to play very well, particularly early on in the game, so as to not have to spend so much effort digging ourselves out of a hole.”

The Pelletiers father, Ryan D. Pelletier, said the game was especially poignant for him as the older brother, Carter Pelletier is a senior.

“We are all proud of our team and for me it was a very special moment to have both my sons playing together for the last season as Carter graduates this year. Seeing them both walk away with 2 goals apiece made this Dad very proud,” Ryan D. Pelletier said.

Three candidates are vying for two seats on the Fort Kent Town Council. Voters will decide which of the three -- Corey Pelletier, Brandon Dayton or Andrew Caron -- will get a seat during the town’s annual election on Monday, March 22.
Apex Weather END_OF_DOCUMENT_TOKEN_TO_BE_REPLACED