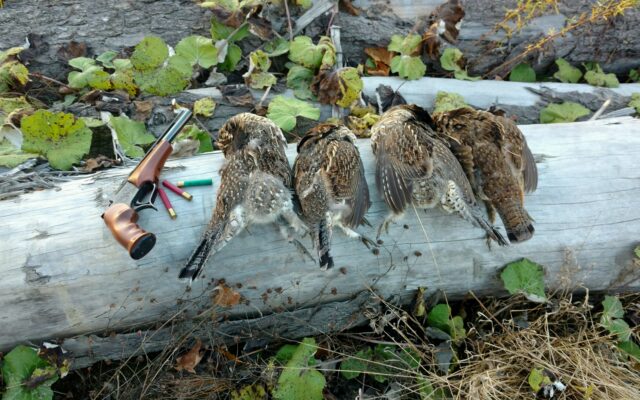 Bill Graves, Special to the Fiddlehead Focus • November 1, 2021
Maine offers a lot of hunting opportunities; there are multiple seasons for big game, small game, upland birds and waterfowl for sportsmen and women to enjoy.

Maine offers a lot of hunting opportunities; there are multiple seasons for big game, small game, upland birds and waterfowl for sportsmen and women to enjoy. Most outdoor folks participate in several shooting endeavors during spring and fall seasons, but most everyone has a favorite quarry. What people might not realize, or even think about, is the fact that ruffed grouse, “partridge” to most Mainers, is the most hunted game animal in the state.

Ol’ Pat offers the highest success rate for hunters of all ages and both genders and the greatest number harvested of any game animal. No matter where you live in Maine, there’s a partridge cover worth hunting within a 30-minute drive of your house. Here in Aroostook it’s probably 15 minutes or less. Pointers, setters and even flushing dogs like spaniels or Labrador retrievers are a great asset in locating grouse, but the bulk of birds shot are spotted and potted while the shooter is walking or driving woods roads.

There are hundreds of thousands of acres of forest throughout the Pine Tree State, all spiderwebbed with skidder and wood harvester trails and log hauling roads. Shotgun-toting hunters wander urban edge wood lots, rural farmland and trails in the “big woods” on their days off from work, long weekends and short pre-work outings. With the four-bird daily limit and a three-month season that ends Dec. 31, it’s estimated that between 650,000 and 750.000 partridge will be shot during an average year.

An interesting sidebar to hunting Maine’s most popular game animal is the current weapons being used compared to those our grandfathers carried a century ago. Throughout the first half of the 1900s, most Pine Tree State sportsmen owned a rifle and a shotgun. The scattergun was usually a 12 gauge for all-around use on rabbits, squirrels, partridge, pheasant and ducks, with occasional use to eliminate unwanted varmints around the farm. Nowadays you could fill a trailer truck with the array of specialty shotguns, but the venerable 12 gauge, albeit modernized and high tech, is still the go-to scattergun for partridge. 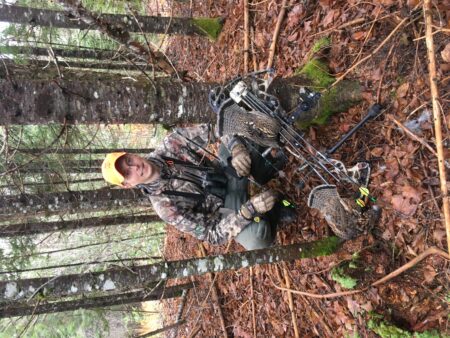 Seth Rooney of Presque Isle ups the challenge of his partridge hunting by using a compound bow, and is quite proficient as the photo proves. (Courtesy of Bill Graves)

But big changes are happening.

At some point around the late around the late 1970s or early 80s, the concept of a single, all-purpose shotgun began to change, and the 20-gauge began to gain favor as a grouse gun. During the last 25 years the trend toward the sleek, light 20 gauge has skyrocketed, with growing numbers of female and adolescent shooters buying grouse guns. The more unique 16- and 28-gauge shotguns are also growing in popularity for partridge, pheasant and woodcock.

There’s also been a growing trend away from semi-auto and pump shotguns to short barreled, lightweight double barrel models, side by side or over/under guns that swing easily and sight quickly in tight covers. The age and experience of the hunter seems to fuel the conversion; life long bird hunters who are over 40 feel the need for a bit more of a challenge and perhaps a more unique gun. I seldom carry anything but a double-barrel shotgun for upland bird, waterfowler and even turkey anymore.

I have a couple of doubles that are older than I am, they are as pretty and elaborate as they are effective. I also have a muzzleloading shotgun, equivalent to a 12 gauge, that requires powder, pellets, felt wad and primer to be hand-loaded for each shot. It’s not a fast process, but fun and a challenging as well as a blast to use-Pun intended.

About 20 years ago, for want of a new experience, I purchased a Thompson Contender break action single shot handgun in .410/45 long colt. Just remove the small choke and flip a lever to switch from shotgun to pistol cartridge. I have had a ball shooting partridge with that gun, and with 3-inch shells even the 10” barrel will drop birds at 30 yards. I know a lot of folks who carry a contender in a chest or shoulder holster a well as their long gun. Quite a few grouse gunners are using a newer .410 handgun made by Taurus call The Judge, it’s effective for birds, rabbits, and squirrels.

Like many Maine youngsters my first shotgun was a single shot .410, it cost my Dad $25 secondhand. My next step up was to a Savage break-action over and under; .22 magnum top barrel and 3”, 20 gauge lower. I traded my .410 and 20 bucks for it. Never should have let that .410 go, and I still own and use that O/U Savage. I even went out and purchased a double-barrel .410 a few years ago that I enjoy using on partridge and woodcock. It cost a lot more than that first .410 I had 60 years ago!

It might surprise you to learn that a good number of hunters are using bows and arrows and crossbows to shoot partridge. A friend sent me a video just this week of him using a range finder and his compound bow to knock a bird over at 42 yards. Partridge are war more than Maine’s number-one game animal; they are plentiful and widespread enough to offer opportunities and success to all hunters as well as a wide variety of shooting options.

No matter what you shoot, whether the grouse is sitting, running or flying, there are two undeniable facts: It’s a fun challenge every outing and fried, roasted or in a stew, they have a fantastic flavor. 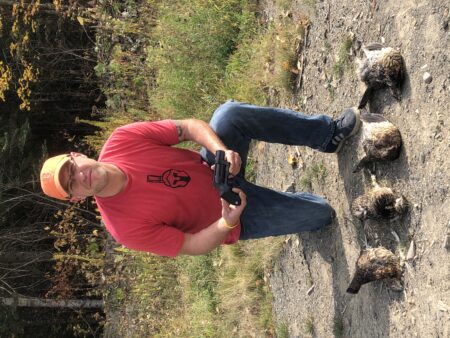 Greg Palm of Presque Isle upped the challenge of his partridge hunting when he purchased a Taurus Judge .410 revolver. The results have been great. (Courtesy of Bill Graves)

Three candidates are vying for two seats on the Fort Kent Town Council. Voters will decide which of the three -- Corey Pelletier, Brandon Dayton or Andrew Caron -- will get a seat during the town’s annual election on Monday, March 22.
Apex Weather END_OF_DOCUMENT_TOKEN_TO_BE_REPLACED

A warm front lifting across the region this morning will lead to increasing clouds with snow overspreading the area later this morning. A cold front will move through this afternoon with snow likely for a period before tapering off behind the front this evening with overnight lows occurring relatively early around midnight.
Our Sponsors END_OF_DOCUMENT_TOKEN_TO_BE_REPLACED