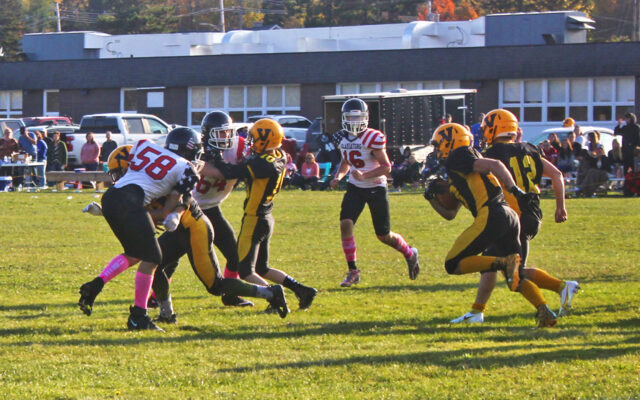 Jessica Potila, SJVT / FhF Staff Writer • October 28, 2021
After a season off due to the pandemic, the St. John Valley Mustangs football team has returned to the field and is headed for the Maine Independent Football League championship.

MADAWASKA, Maine — After a season off due to the pandemic, the St. John Valley Mustangs football team has returned to the field and is headed for the Maine Independent Football League championship.

The Madawaska-based Mustangs will face off against New Hampshire’s Berlin Gladiators in the championship game which will be held Saturday at Alfond Stadium in Orono, home of the University of Maine Black Bears.

The No. 1 Gladiators and No. 2 Mustangs met up for two games this season with both winning on their home fields.

The Mustangs have good reason to be hopeful that they will take the championship title home. The Gladiators were undefeated for almost two straight seasons until the Oct. 9 defeat in Fort Kent.

“In three years of league play, they have never been defeated in Maine,” Mustangs Head Coach Jesse Pettengill said.

The Valley Mustangs are not just about winning championships.

“Football attracts a lot of youth who need an outlet, need discipline, and meaning,”Pettengill said. “I hear a lot of negative commentary about ‘kids these days’ often from those who have not sought to provide meaningful activities for youth. I think kids these days are amazing– and the group of kids that make up the Mustangs 2021 varsity and junior teams are proving it.”

COVID-19 challenged the team by more than a loss of field time. The club level league is down to four teams this year, three in Maine and the Gladiators in New Hampshire.

“We also lost all of our Canadian players, and coaches, because of the border crossing situation,” Pettengill said. “The pandemic really hurt us. Taking a year off when your whole organization survives on volunteerism, and without school backing, loses all your momentum. It was a huge effort to get all the teams started back up again. We have some of the smallest rosters this year that we have ever had.”

Pettengill will be joined by volunteer coaches for the Mustangs Ron Dalgo, Boonie Theriault and Vince Malinauskus. 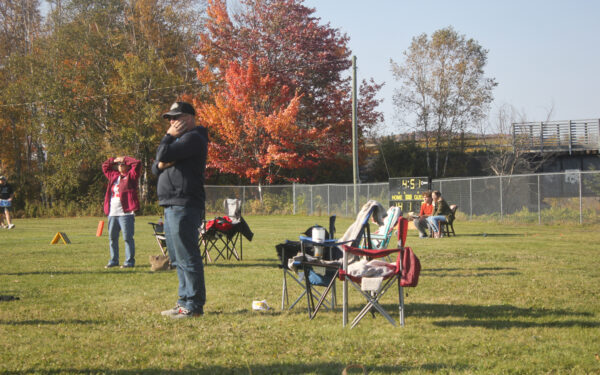 Berlin Gladiators supporters look on as Valley Mustangs players threaten the Gladiators undefeated record at an Oct. 9 game in Fort Kent. The teams, which split wins during the season, will face one another for a final matchup of the season in a league championship game Saturday, Oct. 30 in Orono. (Jessica Potila | St. John Valley Times)

Three candidates are vying for two seats on the Fort Kent Town Council. Voters will decide which of the three -- Corey Pelletier, Brandon Dayton or Andrew Caron -- will get a seat during the town’s annual election on Monday, March 22.
Apex Weather END_OF_DOCUMENT_TOKEN_TO_BE_REPLACED