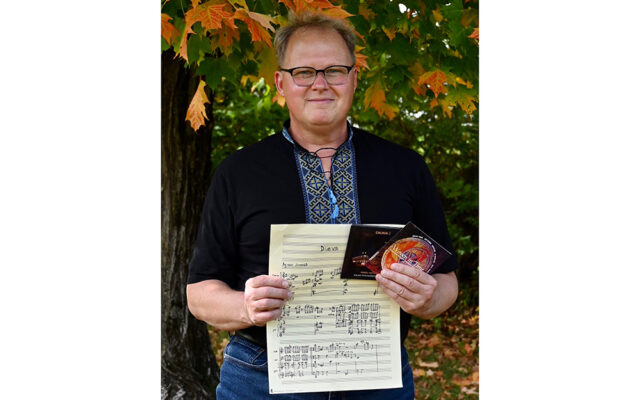 Additionally, his Lament for solo alto flute was recorded by flautist Iwona Glinka and released on the Phasma label (Phasma music 031) on July 23.

Dievs, in Latvian mythology represents divinity, the spiritual and non-material world, light and goodness, sanctuary, creativity. It was the first piece of music Dr. Brickman finished during the pandemic.

Lament for Antoniou, is in a slow-fast-slow ternary structure. It is based on a 12-tone row. The smaller, more “diatonic” segments of the row frame the agitated middle section. The entire range of the alto flute is used to create a dynamic narrative. Theodore Antoniou (1935-2018) was Greek composer who for many years taught at Boston University and directed the Alea III ensemble. Brickman recalls, “Professor Antoniou was a major figure in the Boston new music community and though I never worked directly with him, attended many of his concerts when I was in graduate school.”

“I’m really excited about these performances and recordings,” says Dr. Brickman. “Of course, a recording by a Polish musician is especially meaningful to me because my maternal ancestry is Polish. In fact, though my mother was born in the USA, Polish was her first language. As soon as possible, I’m really hoping to get back to Belgium, Moldova, and especially Poland to hear performances of my music.”

Dr. Brickman’s compositions are recorded on the Parma label in the U.S. and on the Phasma label in Europe. His orchestral music has also been performed in Croatia and Czechia.

Dr. Brickman holds music degrees from the University of Wisconsin and Brandeis University. He has taught at UMFK since the fall of 1997. Professional recordings of his music are available on iTunes, Amazon, Spotify, and other digital platforms, and through hard copies primarily but not exclusively on the Parma and Phasma labels.