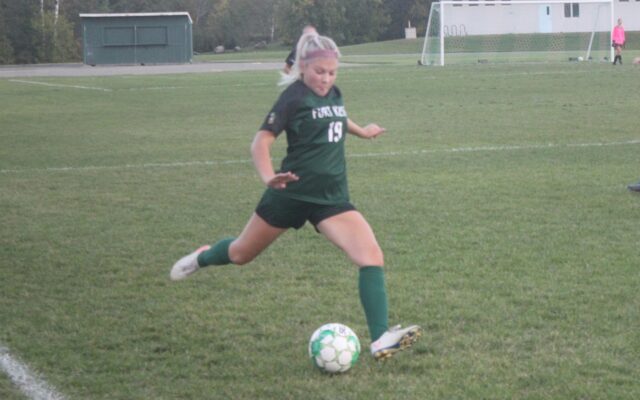 The Warrior girls struggled at their home game, but remained undefeated moving to 6-0 on the season after a 3-2 win in double overtime against the Wildcats.

“Both teams played hard and with a double overtime sudden death it can go either way,” Cyr said. “Presque Isle has always been a talented squad and we have matched up well with them the last four years.”

The teams met up earlier this season in Presque Isle. The Warriors managed to shut out the Wildcats 2-0 during that game, but this was not the case on Wednesday.

The Warriors led 1-0 in the first half on a Hannah Lovley goal assisted by Morgan Cyr with just 10 seconds left of play.

“We had a good first half, followed by a sloppy second half,” Coach Cyr said.

The Wildcats returned the favor just under 16 minutes into the second half when Karlyn Gilmore struck on an assist by Sydney Tawfall to tie things up 1-1.

The Warriors regained the lead 2-1 shortly after with an unassisted goal by Morgan Cyr.

But the pesky Wildcats refused to go quietly as Olivia Kohlbacher evened  the game at 2-2 with an unassisted goal just over 20 minutes into the second half.

“The first overtime was just enough time to get that overtime bug out of the way and when we started the second OT, we told them they needed to want it more than Presque Isle to win this match,” Coach Cyr said. “In 1 minute, 35 seconds, we found the net.”

This is when Lovley scored again, this time on a Darci Pelletier assist, for the Fort Kent win.

Warrior goalkeeper Larissa Daigle had 10 saves on 12 shots. Courtney Kane saved 11 of 14 shots for the Wildcats.

Presque Isle dropped to 2-3-0 on the season with the loss.

An upper-level low that has been bringing clouds and showers to the region will move east into the Maritimes today and tonight. High pressure will build in tonight into Thursday morning followed by a warm front Thursday night.
Our Sponsors END_OF_DOCUMENT_TOKEN_TO_BE_REPLACED