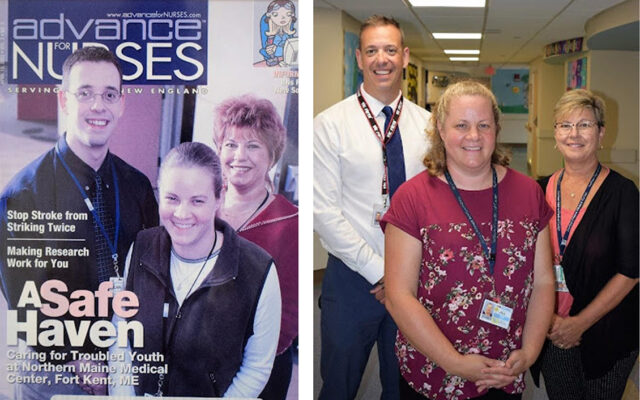 Contributed • September 29, 2021
A little over 20 years ago, hundreds of people, including dignitaries from all over the state, visited Northern Maine Medical Center to celebrate the grand opening of a new children’s psychiatric unit that would provide children structure and hope in their darkest moments.

FORT KENT, Maine — A little over 20 years ago, hundreds of people, including dignitaries from all over the state, visited Northern Maine Medical Center to celebrate the grand opening of a new children’s psychiatric unit that would provide children structure and hope in their darkest moments.

August marked the 20-year anniversary of the unit, which is one of only a few children’s units in the entire state and the only one north of Bangor.

NMMC COO Alain Bois is among several people still at the hospital who helped start the unit.

“As soon as we opened up the unit, it didn’t take us long to ramp up to full capacity. It was a program that was extremely successful and has been successful for a long time,” Bois said.

That success is due in large part due to a statewide collaborative effort to help NMMC establish the service for the northern Maine region. In the late 1990s, concern grew about the need for mental health services all over the state.

“There were a couple hundred kids being sent out of the state every year for services at that time,” said Bois. “We had some space vacated by Visiting Nurses of Aroostook, so we started searching for a child psychiatrist, entered the planning stage, developed policies and procedures, and started to recruit and train staff. That was a challenge because working with children was a specialty that was somewhat limited in the state. There were only four other facilities taking children that young.”

Three of those facilities opened their doors to staff at NMMC for weeks at a time.

“They let us observe what works well, what doesn’t work as well. We took strengths from all three programs to build our own,” said Bois, adding the Department of Behavioral Health Services and the state medical director provided much assistance.

Before the unit accepted its first patient, team members traveled to those other facilities to learn how to work with children who had behavioral or mental health needs.

Donna Daigle, CNA, psych tech and unit caretaker for the children’s unit, was a nursing home CNA when she learned the children’s unit was under construction. She loved arts and crafts and kids, and was at a point in her life when she thought a change might be in order, so she applied for the job.

Today, Daigle is certain she had found her calling.

“We were all green back then. We had some tough cases. It was rough going for the first year. There were little bumps in the road, but 20 years later, I am still here,” she said.

Every detail was considered with children in mind, including the Wizard of Oz themed decor.

The unit offers hope and vital support to families in northern Maine. Coaching and mentoring for families and guardians is an integral part of the program.

Jill Soucie, RN, another original staff member who still works in the unit, said an average stay for a child is seven to 10 days, so having a place where children feel safe and secure is especially important. One of the hardest parts of the job for Soucie is the emotional toll when some kids end up staying much longer.

“Some kids just don’t have a place to come back to, and we can’t release them unless there is a safe place for them to go home to,” she explained. “When we have a kiddo who has been here for two or three months and they keep saying things like, ‘Why does nobody want me?’ or ‘What is wrong with me?,’ it’s hard. How can you be so little and so young, and be so sad?”

Over time, the unit has changed. The walls now showcase the talent of kids who visit the unit. The health concerns children bring with them differ significantly from 20 years ago, transitioning from more behavioral concerns to mental health concerns like depression, anxiety and suicidal thoughts.

“The patient population in the beginning brought in more violent or aggressive patients. Then, for a while, we saw kids with severe autism and you have to work differently with them,” Soucie said.

“Now, we see a lot of depressed teenagers who are LGBTQ and we didn’t see much of that 20 years ago. Sexuality has become more of a consideration and we try to help them understand that they are more than their sexuality and to be okay with who they are,” said Soucie.

Soucie said being adaptable to change is imperative, which is why an interdisciplinary, team approach works best. When medical staff, families, caregivers and even the child’s school work together to make sure that child feels nurtured and safe, then chances of the child succeeding increase substantially.

“It’s like a puzzle and everybody is a piece, including the patient and the family. To get a clear picture, you need all the pieces,” said Soucie.

Soucie said the most rewarding aspect of working with the children is knowing she has had a part in changing lives.

“We see kids come in so sad and we work with them and see that transformation and we know we have a purpose,” she said. “We are making a difference.”

Bois, who now works more on the administrative side of running the hospital, tears up thinking about some of the kids he has seen come through the unit.

“I still get little cards and notes from some of the kids who are all grown up now. It’s really a humbling experience to work with people at times in their lives when they feel their worst and to know our little unit way up here at the top of Maine is making a real difference,” Bois said.

The upper ridge of high pressure that produced the recent mild weather for the SJV will move east today while a weak backdoor cold front approaches. Partly cloudy skies are expected today and tonight along with a slight chance for showers beginning late this afternoon and continuing into early Thursday as the trough moves through.
Our Sponsors END_OF_DOCUMENT_TOKEN_TO_BE_REPLACED