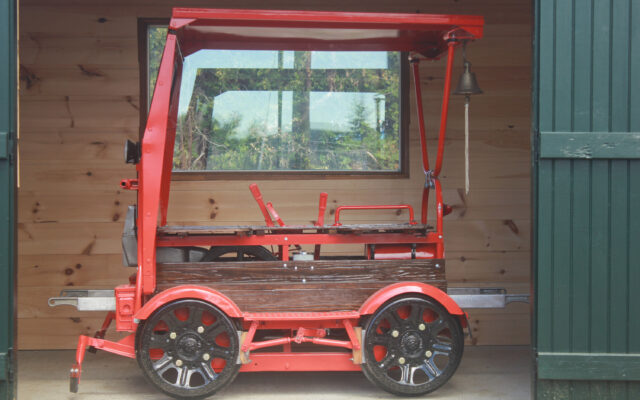 Jessica Potila, SJVT / FhF Staff Writer • September 14, 2021
A newly refurbished Fort Kent Historical Society display is a reminder of how the town has changed since the railroad laid down tracks here nearly 120 years ago.

FORT KENT, Maine — A newly refurbished Fort Kent Historical Society display is a reminder of how the town has changed since the railroad laid down tracks here nearly 120 years ago.

Also known as a “putt-putt,” for the sound it makes while chugging along the tracks, a 1946 Fairmont speeder is on display in a small building next to the Fort Kent Train Station the historical society owns on Market Street.

The speeder provided transportation for railroad repair crews to navigate the railways back in the day.

“After the railroad came through in 1902, in a 10-year period the valuation of the town tripled and so did the population,” curator Chad Pelletier said. “It made the world smaller I guess; you were able to bring freight here and order things from catalogs.”

Before the now-defunct Bangor and Aroostook Railroad arrived in town, supplies were transported by rail to Clair, New Brunswick, across the St. John River.

“Anybody who was a big lumber customer used to have a warehouse in Clair,” Pelletier said. “Supplies were hauled up river to the lumber camps.”

It was legally, if not physically easier to cross the United States-Canada border back in those days, Pelletier said. Although there was a customs agent on site as early as 1842, there was no international bridge. In about 1829, ferry boats began moving freely back and forth between the two countries.

The railroad had an especially profound impact on local potato farms. With the ability to ship potatoes by rail, many farmers expanded to commercial farming.

“Before, if somebody was a big potato farmer they might have a little left over to sell to lumber camps and things like that,” Pelletier said.  “After 1902, that’s when people started planting potatoes commercially and that’s why we call it Market Street, because it opened up the potato market to farmers from the Fort Kent area.”

The growth of the trucking industry in the 1970s began the decline of the local railroad. The 18-wheelers could be heated or refrigerated to control the temperature of food products.

The speeder was donated to the historical society in the early 1980s, by an unknown donor.

Ray Cyr, owner of the former Cyr Autobody, and his friend Gilman Pelletier recently volunteered to restore the machine, a task which required more than 100 hours of service from each of them.

It can be viewed during regular historical society hours —  noon-4 p.m. Fridays-Sundays — as well as through a large picture window in back of the little building that houses it, during off hours.

“I think it’s important that we preserve our culture and our heritage, and the railroad was a major part of that,” Thibodeau said.

Three candidates are vying for two seats on the Fort Kent Town Council. Voters will decide which of the three -- Corey Pelletier, Brandon Dayton or Andrew Caron -- will get a seat during the town’s annual election on Monday, March 22.
Apex Weather END_OF_DOCUMENT_TOKEN_TO_BE_REPLACED