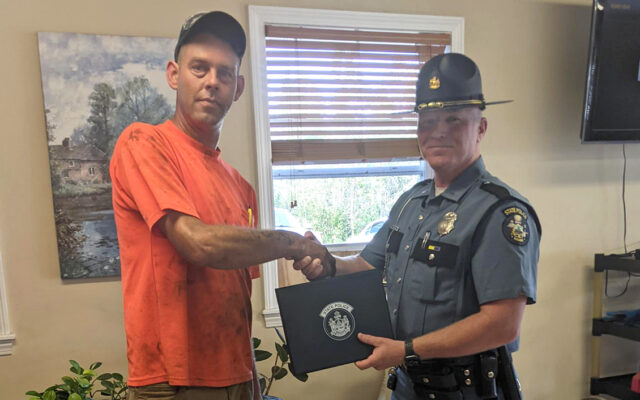 Contributed • September 11, 2021
Almost one year ago, Dennis Kennedy was returning to his former South Carolina home along with his wife, son and niece after visiting their recently purchased property in Madawaska when they encountered something that wasn’t on their itinerary: a high-speed chase on Interstate 295 near Freeport.

MADAWASKA, Maine — Almost one year ago, Dennis Kennedy was returning to his former South Carolina home along with his wife, son and niece after visiting their recently purchased property in Madawaska when they encountered something that wasn’t on their itinerary: a high-speed chase on Interstate 295 near Freeport.

Maine State Trooper James Leonard was attempting to stop a Honda sedan for a traffic violation. The driver fled and, according to a statement published on Facebook by the Maine State Police, “The vehicle turned around in a crossover and while doing so, made a wide turn into the grassy shoulder where it became stuck.”

Travelers slowed down or stopped as Leonard continued his pursuit, forcing the suspect’s vehicle further off the road. The driver of the vehicle attempted to flee but was quickly engaged by the trooper.

Upon seeing the intensity of the struggle with the suspect, Kennedy and another bystander, Paul Gioia, made the potentially life-altering decision to put their own lives in danger and come to the trooper’s aid.

“I don’t really think there was any one thing that made me say ‘Hey, should I do this or not?’ I just did it. It was just the right thing to do. It’s how I was raised,” Kennedy said.

According to police, the suspect threatened to kill the trooper and made attempts towards his firearm. The suspect was ultimately taken safely into custody and the good Samaritan travelers returned to their journey.

Kennedy’s wife, Kristen, thought their experience ended with nothing more than an interesting story to share with friends and family back in South Carolina. She was shocked when an award for Dennis’s role in the apprehension of the suspect arrived in the mail. The only problem was the family had since moved to the St. John Valley.

Kristen had a family member send the award to their new address in St. David. With the help of Grand Isle campground owner and family friend George Dionne, she was able to surprise Dennis with the presentation of the award by Lt. Brian Harris at H&S Garage in Madawaska, where he works.

“When good citizens make good decisions, good things come to them,” Hervin Levesque, Kennedy’s boss, said. “He made a split-second decision that could have possibly saved that cop’s life.”

High pressure will drift east today as a low pressure area and associated fronts moves towards the Valley from the west.
Our Sponsors END_OF_DOCUMENT_TOKEN_TO_BE_REPLACED