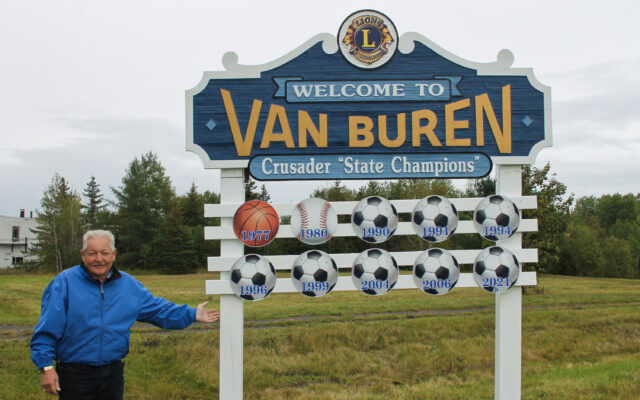 Nevertheless, the lifelong Van Buren resident — and one-time student athlete — was tired of seeing a sign commemorating the town’s sports legacy chipped, peeling and weathering away.

Dumond, 64, and his brothers, Ken and Ralph Dumond, raised $600 with the help of local businesses to create a new welcome sign at the edge of town on Route 1, which includes plaques for each of Van Buren’s state championship teams.

The project was funded by local businesses including Hebert Rexall Pharmacy, Dr. Charles Plourde, Tasty Food, and the sign was made by Mike’s Signs and Designs of Madawaska.

Made of painted wood, the old sign had begun to deteriorate over the past few years. Dumond had done a temporary update to the sign several years ago, but said the new version is made of weatherized plastic which will last much longer.

“I figure somebody else has got to do the work to upkeep the sign and of course I like sports,” Dumond said.

Growing up in town, Dumond said sports teams were the pride of the community. Dumond himself played baseball for three years at Van Buren High School, one season batting the highest average on his team.

While a state title eluded Dumond, his sister, Sue Ouellette, played on Van Buren’s state championship-winning 1977 basketball team: the first title honored on the sign Dumond and his brothers installed. Ouellette passed away in 2014.

As Van Buren and its athletic programs get smaller each year, Rossignol said keeping the memory of past achievements alive might help inspire future ones.

“I think the sign is a testament to the importance of the achievements of our youth and the pride we have in our community, as well as a reminder of the rich tradition our town has,” Rossignol said.

Tonight will be partly cloudy with lows dipping into the lower-to-mid-50s.
Crown Politics END_OF_DOCUMENT_TOKEN_TO_BE_REPLACED