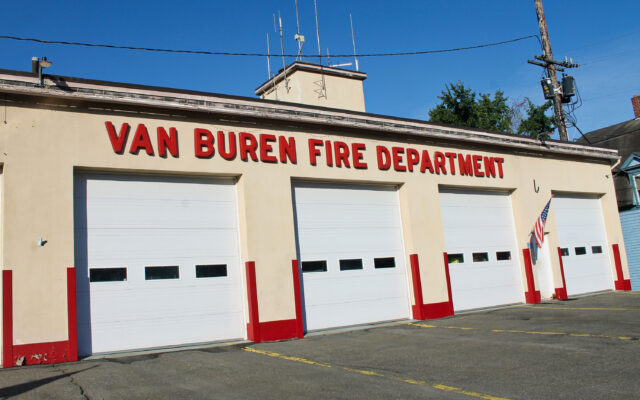 Hannah Catlin • August 19, 2021
The Van Buren Fire Department is applying for a grant to build a new fire station on Main Street to replace the nearly 50-year-old station it has now.

VAN BUREN, Maine — The Van Buren Fire Department is applying for a grant to build a new fire station on Main Street to replace the nearly 50-year-old station it has now.

Tucked behind and above the town office, the current building has both crucial structural flaws and is too small to house Van Buren’s entire fleet of fire and rescue equipment — which has meant storing some rescue trucks miles away.

For now, the department is just preparing plans and identifying potential locations for a new station to give Van Buren a better chance of winning grant money when and if it becomes available. The FEMA grant, which would arise out of a bill currently waiting for congressional debate, has not yet been funded by the federal government.

The department is looking at a nearby location on Main Street next to the town office, where it hopes to put a new building, should grant money come through. Dead River owns that land, and is using it for offices. Chief Brian Caron, deputy town manager Luke Dyer and two town councilors will meet with Dead River in the coming weeks to discuss potentially purchasing the land.

Van Buren has used the current station since 1972, when it was built on top of the pre-existing town office building, which used to be a movie theater. Fire truck bays are located above Caron’s office, a firefighter training room and the town council chambers. In recent years, water has begun leaking through the concrete floor of the bay and into the offices below, and Caron is concerned about the long-term stability of the structure. 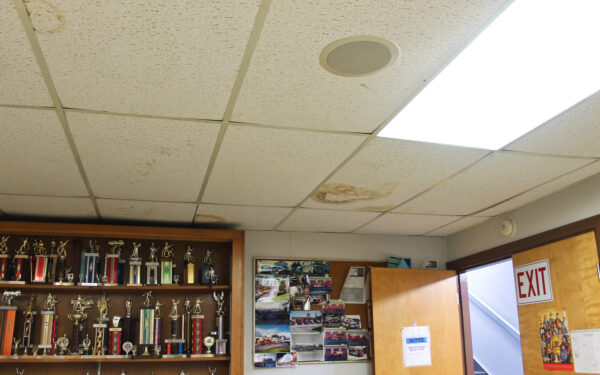 Water tankers and fire trucks are much heavier now than they were 50 years ago when the station was first built. Just one of the town’s tankers has gone from holding about 1,000 gallons to 4,000 gallons of water, and on top of that, all the trucks are larger than older models.

Each year, the department removes ceiling tiles in the rooms below the bay to measure how much the floor has moved — and it does vary from year to year. Engineers have given mixed responses as to the urgency of the situation, Caron said, but he and everyone else agrees a safer building is needed in the near future.

Poor insulation in the cinder-block and concrete garage also means that there’s little temperature and humidity control for the trucks, which wears the vehicles out faster. When the humidity is particularly bad, Caron said the walls and floors will become wet to the touch.

“We’ve done a lot of work to the station, but we’ve kind of maxed out,” Caron said.

There are other, community-wide safety concerns with the current arrangement, too — one of the department’s water tankers is parked in Keegan at the fire department’s nearest appropriately sized garage, almost three miles from the station. The relay to get the truck can cost precious minutes in an emergency situation.

“When we know in advance, one guy will shoot that way, but sometimes we get here and then say we need the tanker and a guy has to go six miles,” Caron said.

If Van Buren can get grant money to build a new station, it would use part of the proceeds to move the ambulance department into the old station, an arrangement Caron said is safer in the long run.

For one, the department’s two ambulances are much lighter than all of the town fire equipment, and wouldn’t put such strain on the building. With only two ambulances to put in the large fire department bay, the rest of the garage would be used to build new barracks for the EMTs, who are housed several minutes’ drive from the ambulance station while on shift.

The new station Caron hopes to pitch would be pre-fabricated, long enough to store all of the trucks in two or three lines, and with a garage door big enough to accommodate the department’s large training trailer — another vehicle currently stored off site. It would also have facilities for training, and an office for Caron.

Maine’s longest serving legislator, Martin was first elected to the Maine House of Representatives in 1964 when he was 23.
Our Sponsors END_OF_DOCUMENT_TOKEN_TO_BE_REPLACED