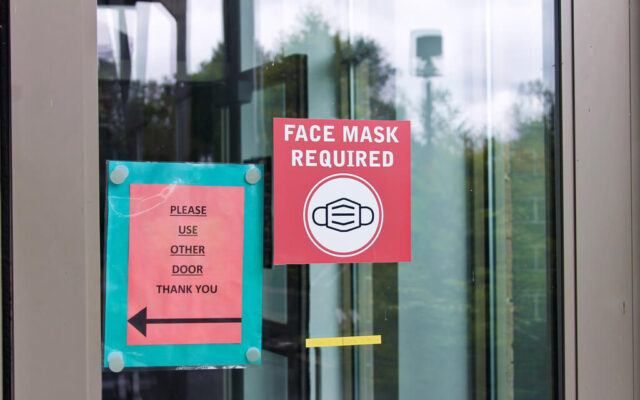 Hannah Catlin • August 19, 2021
Madawaska and SAD 33 (Frenchville and St. Agatha) are both mandating masks in schools as COVID-19 cases continue to rise in Aroostook County.

Madawaska and SAD 33 (Frenchville and St. Agatha) are both mandating masks in schools as COVID-19 cases continue to rise in Aroostook County.

The mandate for Madawaska will go into effect next Monday for the second week of school. It comes after the CDC reclassified Aroostook County from having substantial to high community transmission rates — a benchmark the school board set in early August to trigger universal masking.

SAD 33’s school board met for an emergency meeting Wednesday to reconsider the mask mandate it agreed on previously, but ultimately upheld the original decision.

The board called the meeting after survey data showed overwhelming support for optional masking among the districts’ students and parents. Teachers were tallied too, and favored optional masking as well, but by slimmer margins.

Of Valley Unified’s three districts, only SAD 27 (based in Fort Kent but includes students from several towns around it) is still committed to optional masking and has not set any threshold to trigger a mask mandate. Its school board voted on the matter on Monday.

Just last week, most districts in Aroostook County had decided to go optional, but as classes begin this week and next, school boards across the region are reconsidering. Following outbreaks in southern Aroostook, Hodgdon reconsidered but ultimately upheld its optional mask policy at a marathon Wednesday night meeting. Houlton will discuss the matter on Monday.

While the mask mandates for Madawaska and SAD33 were triggered by the CDC classifying Aroostook County as having high community transmission, COVID-19 cases are beginning to appear within the Valley Unified system.

One case has been confirmed within the SAD 33 district, and two more likely cases have been identified — one in SAD 27 and one in Madawaska — Valley Unified Superintendent Ben Sirois said. The two likely cases are based on preliminary reports from school nurses. Sirois was unable to confirm whether the cases were among the school staff, or in the student population.

Fearing an outbreak and a subsequent move back to remote education, teachers and students spoke in favor of mandates at the SAD 33 meeting, though most said they would prefer not to have to wear masks.

“I would personally rather be learning in school wearing a mask even though it’s not as enjoyable,” SAD 33 student Madysen Picard said. “Even if I don’t want to wear it, I would rather wear it than be home and not learn anything — even if I don’t agree with it working or not.”

Teachers from Wisdom Middle/High School and Dr. Levesque Elementary who spoke at the meeting said that during the past year, they found that remote learning does not work for most children, especially students with special needs.

Among people opposed to the mask mandate, some worried that masking could be equally detrimental to children with special needs. Frenchville resident Patience Bernier said she has even considered homeschooling her preschool-aged daughter, who has anxiety and has struggled with in-class pandemic restrictions.

Ultimately, the board decided that the risk of moving back to remote education was too great. The guidelines for moving kids into quarantine and isolation are set by the state, and if students are not part of a pool testing program, any close contact with a positive case in a classroom where masks are optional is cause to send a child home.

The vote was unanimous, except for board member Lana Cyr, who abstained. Board members Melissa Paradis and Alex Zetterman were not present for the meeting.

Following the concerns of parents, the school board asked that mask breaks be available to all children throughout the day — in which students can sit in the hall outside of class for several minutes without their masks on. The board also decided to raise the threshold for universal masking to only come into effect when the CDC identifies high transmission in The County. It’s previous decision had called for masks during both substantial and high transmission.

“I stand by our decision to remain fully masked,” board member and SAD 27 special education teacher Jean Martin said. “I believe that all students belong in school, with in-school learning.”

Maine’s longest serving legislator, Martin was first elected to the Maine House of Representatives in 1964 when he was 23.
Our Sponsors END_OF_DOCUMENT_TOKEN_TO_BE_REPLACED