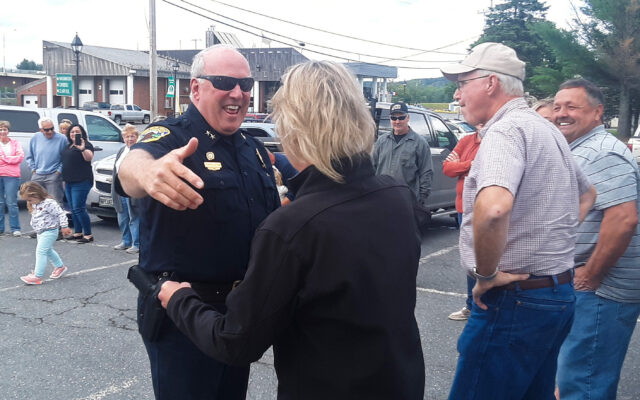 Pelletier, 58, joined the FKPD as chief in 2014, a few years after he retired from more than two decades of service with Maine State Police. Prior to that he served in the United States Navy.

“Doing this job is not possible without support from all you people and I have had nothing but support since I’ve been here — 150 percent,” Pelletier said. “This town has been awesome. It’s just time for me to move on.”

Pelletier individually greeted every person in attendance on Friday, shaking hands or hugging them. 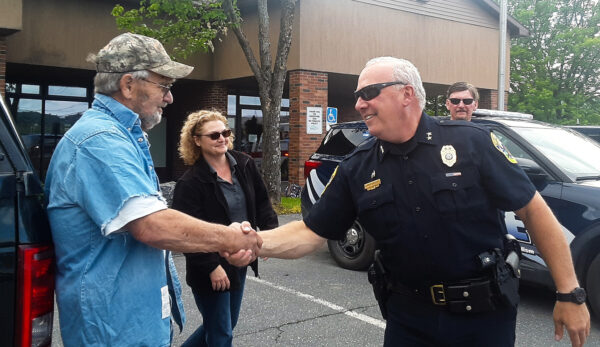 He shared an emotional embrace with his wife of 37 years, Carol Pelletier, who for the majority of their marriage has endured the worry and uncertainty of being a law enforcement spouse, and thanked her for the support she offered during his career.

The couple share two adult children, daughter Jamie Pelletier and son Derek Pelletier, who followed in his father’s footsteps to serve in the Navy, where he is a helicopter pilot.

“He has been certainly a mentor for me; I truly trusted him,” Pelletier said.

Former Fort Kent police Officer Michael DeLena, who is now a patrol sergeant with Aroostook County Sheriff’s Office, was among those who attended the ceremony.

“When I started at Fort Kent Police Department, Chief Pelletier mentored me and would eventually tell me that he trusted the decisions I was making on the road, which meant a lot to me,” DeLena said. “I grew as a police officer under his tenure as chief.”

“Chief Pelletier was community-oriented and spent time being involved within the schools and businesses in Fort Kent,” DeLena added. “He had a common sense approach to policing and focused on the little things that matter most to people.” 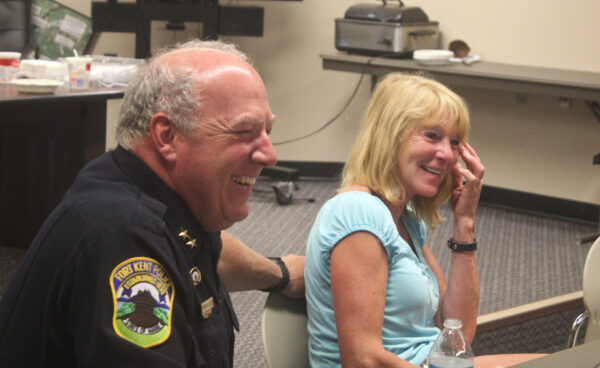 All people mattered to Chief Pelletier, according to Fort Kent resident Paula Saunders.

“For me it is his relatability to kids, especially those with special needs within the community,” Saunders said.

She recounted how Chief Pelletier made a positive impact on her daughter, Sophie Saunders, who was born with Williams Syndrome, which presents challenges such as intellectual disabilities.

When Aroostook County Special Olympics was canceled in 2019, and a special event was held instead for local athletes at Fort Kent Community High School, Pelletier attended and handed out medals.

Pelletier also escorted Sophie Saunders in his police cruiser during the senior parade for her graduating class of 2020.

“Sophie has always been in awe of ‘Chief Tom,’” Paula Saunders said. “He would always say ‘hi’ to her, ask how she is doing and give her a big hug. This in turn made Sophie feel very safe and protected.”

“He’s that type of person,” Theriault said. “It made no difference who you were; Tom had a strong commitment for the community. Tom would have done anything for people of special needs and I think he set a good example of a chief doing that.”

“He’s a person that really cares and has a good heart — I can say that about Tom Pelletier,” Theriault added. 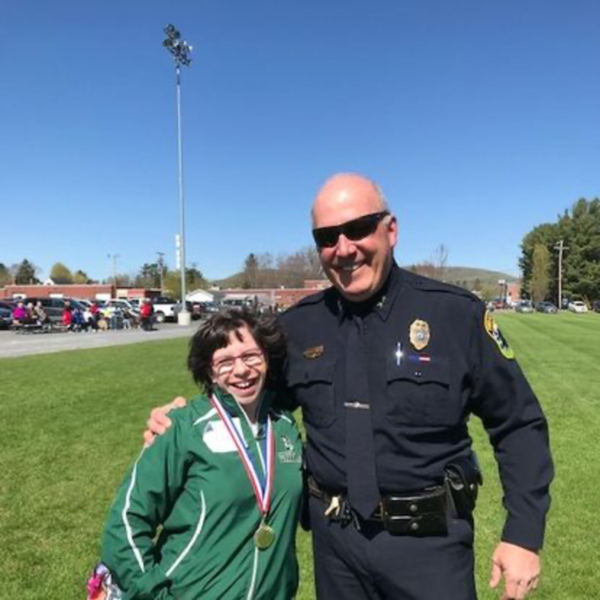 Town Manager Suzie Pelletier recognized some of Pelletier’s contributions to the community, “which have gone under the radar.”

“You’ve been a very generous individual in the community,” Paradis said. “You’ve gone out of your way to give gift cards and money to people in need and that’s commendable. It’s gonna be tough to replace you.”

“You have dedicated a total of 33 years to law enforcement, receiving calls all hours of the day and night, missing many special occasions with family and friends, so now it is your time to enjoy yourself with your wife and family and your endeavors,” Ouellette said.

“Chief Pelletier, we will now know you will be home safe.”

High pressure will drift east today as a low pressure area and associated fronts moves towards the Valley from the west.
Our Sponsors END_OF_DOCUMENT_TOKEN_TO_BE_REPLACED