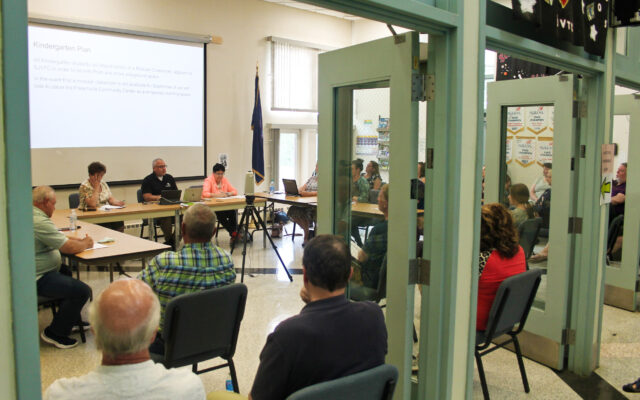 FRENCHVILLE, Maine — Following a devastating fire last Sunday, former Dr. Levesque Elementary School students will be split between St. John Valley Technology Center and the Wisdom Middle/High School at the start of the next school year.

Classes are scheduled to begin on Sept. 9.

The SAD 33 school board voted unanimously to approve this plan at a July 28 meeting at the Tech Center. Around thirty people from the school, the local government, and the town crowded into a small meeting room in the atrium of the building, some spilling out into the front hall.

The plan to divide students is a temporary one, though Superintendent Ben Sirois said it may be long term as the district and school board look for a more permanent remedy to the loss of Dr. Levesque School.

For the time being, pre-K students will be relocated to the St. John Valley Technology Center, where they will take up classes in the early childhood education room. Students studying education at the Tech Center will continue to do so four days a week, and will work directly with Dr. Levesque students.

Kindergarten, meanwhile, will take place in a modular classroom at the Tech Center — if the district can find such a classroom. Many have already been purchased or claimed for extra spacing in accordance with COVID-19 protocols, Sirois said. If a modular classroom isn’t available, kindergarteners will start classes in the Frenchville Community Center.

The rest of the classes for grades one through six will take up residence in a wing of the Wisdom Middle/High School — which will have its own entrance and be separated from the older students during the school day.

Special education classes will be consolidated in a large room at Wisdom Middle/High School, where temporary walls will be used to create smaller spaces within.

“No plan, no matter how thoughtful, will ever take the place of Dr. Levesque Elementary, but we will start small and build on from there,” Sirois said.

There were relatively few questions from the crowd during the meeting. After the school board adjourned, though, Dr. Levesque teachers and administration left to discuss the plan in private.

The district is expecting its first insurance payment next week, Sirois said. A claims adjuster from United Insurance will tour the site of the Dr. Levesque fire, and speak with representatives from the school and district on July 29.

These insurance payments will bear the cost of relocating students and preparing the other schools for their arrival, Sirois said. Costs will include things like renting the modular classroom, and upgrading the entrance to the wing students will use at Wisdom with new stairs and an ADA-compliant ramp.

Sirois said representatives from all schools were involved in planning. Although the relocation will be disruptive — especially at Wisdom, where some classrooms and offices will need to move out of the Dr. Levesque wing — Sirois said principals were on board.

In some ways, the new set-up may provide unexpected opportunities. Director of the St. John Valley Technology Center Kevin Lavoie pointed to the early childhood education students at the Tech Center who will be able to help out with kids, and get more experience working with young students.

“Dr. Levesque Elementary is a terrible loss. It’s been a shining light in this community for 70 years,” Sirois said. “For many in the room, this was your school, it was your children’s school, it might even have been your grandchildren’s school. We only hope it’s going to allow us to build toward a new promising future for the district.”

High pressure will drift east today as a low pressure area and associated fronts moves towards the Valley from the west.
Our Sponsors END_OF_DOCUMENT_TOKEN_TO_BE_REPLACED