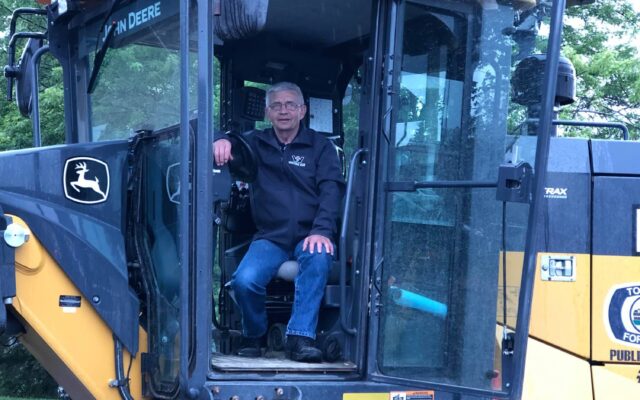 Hebert, 67, retired from the department after 43 years of public service. He served so well that Theriault has retired 703 as an employee call number.

Reynold Hebert first began working for the public works department with his father, Lucien Hebert, who ran the blower for the town.

“That makes a long time ago we used  to work there when I was younger, me and my father in the snowstorms,” Reynold Hebert said. “I loved it.”

“My dad was very dedicated to his job; he worked with pride,” said Hebert’s daughter, Kelsie Jarrett. “He used to do all these overnights in the winter and for 42 years he never missed a winter storm.”

Theriault said that public works employees are on call 24 hours a day, seven days a week during the winter months.

In the summer Hebert responded to anything ranging from fallen trees to reports of dead animals in the roadway.

“He really did it all,” Theriault said. “He’s a prototypical worker. He does everything, and work ethic — you couldn’t ask for better.” 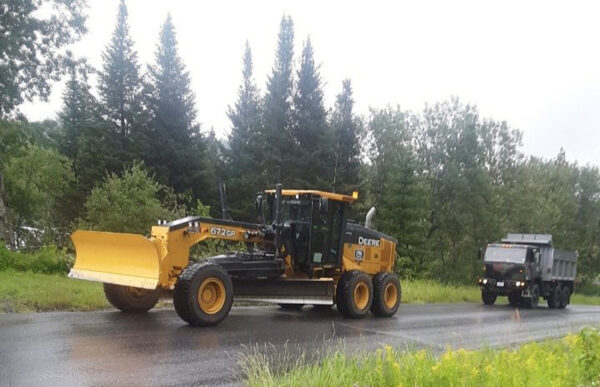 Public works vehicles paraded through town on Wednesday, July 21, in honor of Hebert, and surprised him by traveling past his South Perley Brook Road home. Theriault and fellow public works employees put much thought into the parade, arranging them in order of which vehicles Hebert would have worked with throughout his career.

A snow truck, payloader, blower, plow truck, and other vehicles were headed up by a Fort Kent police car and at the tail end the oldest piece of equipment the guys could find.

“We were always kidding about that Reynold had been here 42 years and nothing here that lasted that long,” Theriault said. “Then I thought, we have an old steam boiler that we thaw out culverts in wintertime. Reynold always told me, ‘I think that was here when i started.’”

A town truck pulled the steamer at the rear of the parade.

Afterwards, the town held a retirement party for Hebrt at the town office. Town manager Suzie Paradis presented Hebert with a plaque, and showed a photo of Hebert that will hang on the municipal building wall.

“He’s the one who drove the grader all the time,” Theriault said. “He loved that grader … he was good at it. It was stronger than him and he had to jump in the grader. He took off and his wife was chasing him. He was all smiles.”

“He knew where every manhole and culvert were and maintenance history on all the equipment,” Pelletier said. “In the grader he was second to none and I learned a lot just watching him work his craft.”

“He tells us all the time that he’s going to miss his grader most and the people he worked with but he’s going to enjoy about his retirement his grandkids and a full night’s sleep,” Jarrett said.

“It’s gonna be nice; I’ll be home,” Reynold Hebert said. “When we want to go somewhere we won’t have to worry about work. When I don’t have anything to do anymore I’ll break something and I’ll fix it.”

Hebert is married to his wife of 45 years, Beverly. The couple are also parents to sons Corey and Jamie Hebert. They are also grandparent’s to Kelsie Jarrett’s daughter Ella, age 9 and son Carter, age 6.

High pressure will drift east today as a low pressure area and associated fronts moves towards the Valley from the west.
Our Sponsors END_OF_DOCUMENT_TOKEN_TO_BE_REPLACED