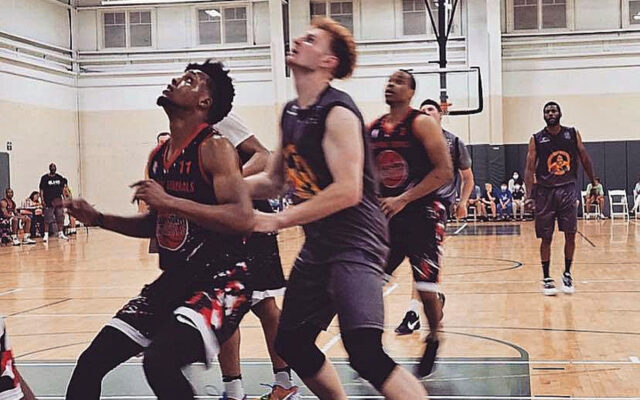 FORT KENT, Maine — A semi-professional basketball team with strong playoff prospects has both a player and coach with Fort Kent ties.

Thomas Enerva, 27, a Fort Kent Community High School and University of Maine at Fort Kent graduate who played basketball for both schools, is a center on the Midcoast Sternmen, a Professional Basketball Association team based out of Rockland.

“Fort Kent, in many ways, sculpted who I am as a basketball player and as a person,” Enerva said. “Playing at Fort Kent High School gave me the platform and opportunity to be a competitive athlete. Competing on the court in front of your hometown with kids you grew up with is an unparalleled experience of pride and camaraderie.

“That sense of hometown pride is what fueled my decision to play at UMFK under coach Tom Bird,” Enerva added.

“The 10th man off the bench could have given you a 20-plus point game,” Enerva said. “A team with that caliber of talent gave our practices a degree of intensity that laid out the path to our successful season into the National tournament.”

Enerva is now playing for the Sternmen under coach Jim Graffam, who coached UMFK men’s basketball from 1996-2003.

When Enerva attended an open tryout for the Sternmen at the Midcoast Athletics Center in Warren, it just so happened coach Bird was in the house. Graffam was chatting with Bird when Enerva came walking up to greet his former UMFK coach during the tryouts.

Bird told Graffam that Enerva was a talented basketball player when he played for the Bengals.

“It wasn’t long during the tryouts that I realized Enerva had the potential to play at this level,” Graffam said.

Tony Enerva, Thomas’ father, attends all of his son’s home games in Maine and was at the Rockland Community Center when the Sternmen defeated the Buffalo Blaze 102-66 last weekend.

“It really is a family atmosphere down there,” Tony Enerva said. “Everybody knows everybody. I bring water out to the team.”

Tony Enerva said he is proud of all three of his sons, but enjoys watching Thomas play in the semi-pros.

“It’s his dream, but I’m living it with him,” Tony Enerva said.

The 17-week regular season of the Professional Basketball Association will run through  July, followed by three weeks of postseason play in August. The PBA semifinals and championship game will be held in Dallas.

Graffam said his team has a shot at going to the playoffs.

“Because this is a league of opportunity, I’m hoping this isn’t the last UMFK kid that I get to coach,” Graffam said.

Thomas Enerva offered advice to high school basketball players who have yet to follow in his giant footsteps.

“Embrace everything from the long bus rides after a win to the tough losses at home; build from it,” he said.

A cold front moves through today with scattered showers that will taper off this evening as high pressure builds into the region with partly cloudy skies.
Crown Politics END_OF_DOCUMENT_TOKEN_TO_BE_REPLACED

All five candidates running for two seats on the Fort Kent Town Council gathered at a live question and answer forum.
Our Sponsors END_OF_DOCUMENT_TOKEN_TO_BE_REPLACED