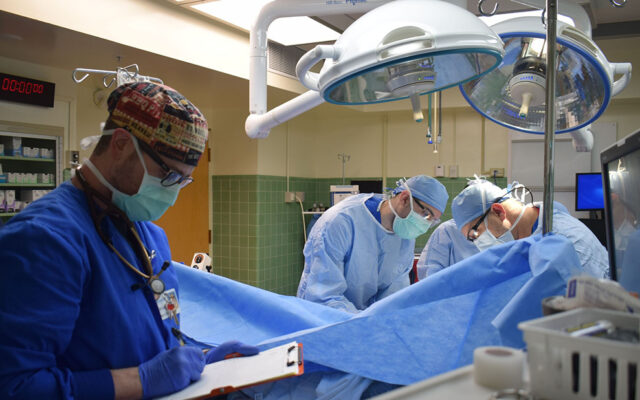 Contributed • July 22, 2021
As staff at Northern Maine Medical Center begin to occupy finished floors in the hospital’s four-story expansion project, construction activity has entered a new phase beginning with the demolition of the old operating rooms for renovations of that existing space.

FORT KENT, Maine — As staff at Northern Maine Medical Center begin to occupy finished floors in the hospital’s four-story expansion project, construction activity has entered a new phase beginning with the demolition of the old operating rooms for renovations of that existing space.

It was in those circa-1950s, green-tiled operating rooms where several nurses worked alongside each other for more than a third of a century. making an impact in many lives.

Monique Pelletier, the administrative assistant for facilities management at NMMC, met up recently with one of those now-retired, former operating room nurses. The conversation turned to the ongoing expansion project that will add more than 16,000 square feet of space to the hospital, including two new state-of-the-art operating rooms. The nurse commented that she might like to stop by for a tour, and that is when Pelletier had an idea to invite retired operating room nurses to a reunion tour that would give them a sneak peek at the future of surgical services in the St. John Valley.

“They were excited about coming. I believe we had a total of five retired nurses come in for a pre-occupancy tour — Alice Carpenter, Rena Deprey, Gladys Bouchard, Leone Saucier and Ethel Jalbert,” said Pelletier. “Imagine spending 40 hours or more a week with someone for over 30 years. That’s nearly 63,000 hours.”

When nurses spend that much time together working in the often intense environment of saving lives, they forge bonds that span the decades. They worked side by side through shared emotional experiences and exhausting nights.

So, when the retirees arrived, it really did feel like a family reunion. The banter and quick wit flowed with a familiar ease as the nurses toured the new space, chiming in with choruses of “Remember when…” and expressions of awe.

Rena Deprey seemed most impressed by the size of the new space, saying, “Wow! It’s humongous. And a lot more lighting.”

“I like the color, too,” added Gladys Bouchard, who worked for 38 years with NMMC. “All we had was that green.”

One of the biggest changes in the new operating rooms is in the technology. In their years at the hospital, these nurses had a front-row seat to technical advancements in medicine, including the advent of the digital age. Alice Carpenter spent 46 years at NMMC, most of those as a nurse in the operating room.

“I thank the Lord my mind is good,” she said “I got a new laptop and I have trouble. Everything is so modern, and we are so ancient.”

The nurses were sometimes “on call” where they were welcome to stay home until needed, but if a call came, they had to make their way to the hospital quickly.

“I used to come in on call to the ground floor and run up all the stairs to the third floor,” recalled Carpenter.

Now new elevators connect the emergency room and maternity floors to the hallway just steps from the operating rooms to ensure staff can transport themselves and patients quickly.

If the walls in the old operating rooms could talk — but since they can’t, those stories remain stitched in the minds of those who worked here like patchwork in a quilt.

“I dream of this,” laughed Carpenter. “I’m going around bossing everyone.”

Bouchard agreed, “Me, too. I dream often that I am in the old OR. I dream that I’m still back here working and forget to punch in.”

For Pelletier, the experience of touring with her peers put a new perspective on the entire construction project.

“The tour with these ladies was one of the most interesting and fun things I’ve witnessed with this whole project. Hearing their stories about how the scope of their job changed over the years and their memories was priceless,” said Pelletier.

For the nurses, coming back to NMMC was a bit like coming home, even though it looks somewhat different now.

“I’m very grateful to NMMC for giving us this chance. I didn’t want the first time I came back to be as a patient because I wanted to walk around and see it,” said Carpenter.

The nurses recalled having used laughter as a medicine for some of the tougher experiences they had. They recalled the very few patients over the years who arrived in emergency situations at their operating rooms whose injuries were just too much, and they recalled the heartache they felt when these tragedies occurred, grateful they never had to face those moments alone.

Deprey summed up what everyone was feeling in a few simple words: “We loved the O.R.”