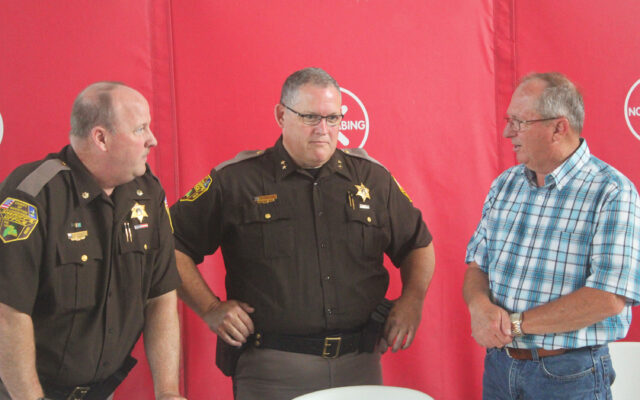 Jessica Potila, SJVT / FhF Staff Writer • July 20, 2021
It was a hot July afternoon in northern Maine, yet more than 60 residents of two small St. John Valley towns piled into a stuffy gymnasium to talk about the recent spate of criminal activity in the area.

ST. FRANCIS, Maine — It was a hot July afternoon in northern Maine, yet more than 60 residents of two small St. John Valley towns piled into a stuffy gymnasium to talk about the recent spate of criminal activity in the area.

Aroostook County Sheriff Shawn Gillen and Commander Joey Seeley met with residents of St. Francis and St. John Plantation Saturday at the St. Francis Community Center to listen to the community members and discuss ways to improve their safety.

St. Francis selectmen initiated the meeting and invited St. John residents to attend. St. Francis has a population of about 400 people, and St. John Plantation has between 200 and 300.

Despite the small sizes of the towns, community members expressed big worries about vehicles speeding up and down the road that connects them — Route 161 — on a regular basis, resulting all too often in high-speed chases involving police. The residents were especially concerned about illegal drug activity in their towns.

Perhaps the most profound representation of the community members’ concerns occurred when a 7-year-old boy who had been playing outside while his caregivers attended the meeting came across drug paraphernalia, a pipe used to smoke methamphetamine, on the community center lawn.

Neither town has a local police department, and as is the case with many small towns in Aroostook County, they rely on Sheriff’s deputies and Maine State Police troopers to enforce the laws and keep people safe.

“Can everybody agree, things are a little crazier than they were maybe five years ago?” Gillen asked at the meeting. “A large majority of our incidents involve either substance abuse disorder or mental health problems.” 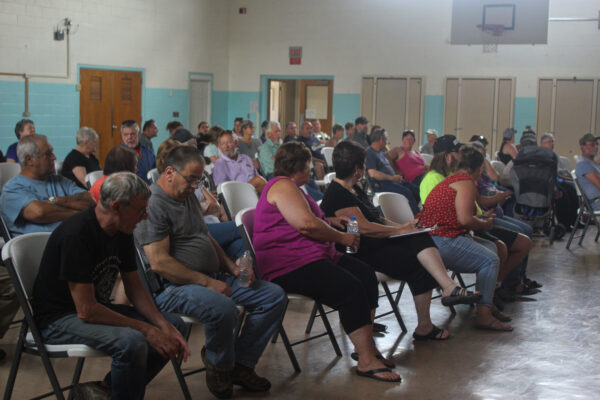 “We know where it is; we know who’s bringing it in,” Landry said.

The “‘where” allegedly includes a shanty located at the bottom of a hill on the south side of St. Francis, which the residents now refer to as “Meth Mountain.”

“Back in the day, our parents were so afraid we were going to smoke pot; today we worry about meth,” Landry said. “This is scary today.”

“Everybody needs to look out for those who believe we’re still living in Mayberry because we’re not,” added an older St. Francis resident. “I’m far removed from the drug scene, but I know where the meth houses are.”

Several of the residents asked the law enforcement officers why more is not done to treat drug offenders who are taken into custody.

Gillen said Aroostook County Jail, which he oversees, offers more than 20 programs to help aid drug addicts in recovery while they are incarcerated.

“I can’t make someone in my jail take a program,” Gillen said.

Another concern among the residents was a lack of law enforcement coverage in the towns.

When it comes to 911 calls, the deputies alternate four zones in Aroostook County monthly with Maine State Police.

Both departments are experiencing a shortage of officers.

“I have things in the works to get more deputies on the road,” Gillen said.

In the meantime, Gillen and Seeley advised the residents to be proactive to avoid becoming victims of crime.

“I think everybody needs to be hypervigilant of their surroundings, Gillen said.”

This includes adopting common sense approaches such as keeping vehicles and home doors locked at all times and having a neighbor pick up newspapers when out of town.

“We’ve solved homicides with cameras right down to someone spinning up someone’s lawn,” Gillen said. “They are phenomenal. If you can get them, try to get them.”

Seeley also recommended that people be mindful of what they post on their social media accounts when leaving town, so as not to alert potential thieves.

“Don’t go on Facebook to give a blow by blow of what you’re eating and when you’re going to the bathroom while you’re in Florida,” Seeley said.

The officers also told the community members that their best defense against crime is to look after one another, pay attention to what is happening in the towns and report any unusual activities or concerns to police.

“If something does not look right, report it,” Seeley said.

St. Francis and St. John Plantation community members intend to do just that.

By the end of the meeting, a number of people had signed up for a community watch program for which they will seek additional training from the Sheriff’s Office.

A warm front moved through overnight ushering in higher dew points and humidity levels. Low-level clouds across the Valley will keep temperatures in the lower 70s today for most Valley locations.
Our Sponsors END_OF_DOCUMENT_TOKEN_TO_BE_REPLACED