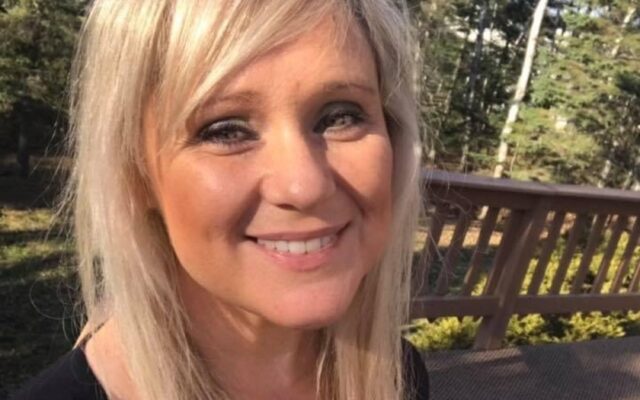 Jessica Potila, SJVT / FhF Staff Writer • July 19, 2021
A St. John Valley woman who survived a May 27 head-on collision that claimed the life of the other driver remains hospitalized nearly two months after the crash.

FORT KENT, Maine — A St. John Valley woman who survived a May 27 head-on collision that claimed the life of the other driver remains hospitalized nearly two months after the crash.

Chantal Hayes, 45, struggles to recover from critical injuries she sustained in the crash. She remains at Northern Light Eastern Maine Medical Center, located 180 miles away from her Fort Kent home.

Hayes, a single mother of three children — daughter Karis, 18, and sons Joah, 8, and Malachi, 6 — was traveling to her job as director at Ultra Body Contour Med Spa in Presque Isle when the crash occurred.

Kelsey Jane Whitely, 28, a registered nurse, was returning to her home in Fort Kent from a midnight shift at Northern Light A.R. Gould Hospital in Presque Isle when her vehicle crossed the centerline of Route 161 in Madawaska Lake and collided with Hayes’ vehicle. Whitely died in the crash.

Since the accident, Hayes has undergone eight surgeries for her injuries, which have included abdominal ruptures, contusions to her heart and lungs, blood clots and fractures to her ribs, collar bone, sternum, pelvis, feet, an arm, leg and two broken vertebrae in her neck, according to her brother, Jonathan Nathaniel Hayes.

The force of the crash caused her vehicle’s emergency brake to become lodged in Chantal Hayes’ leg. She remains in a wheelchair and will need to undergo inpatient physical rehabilitation when she is released from the hospital. 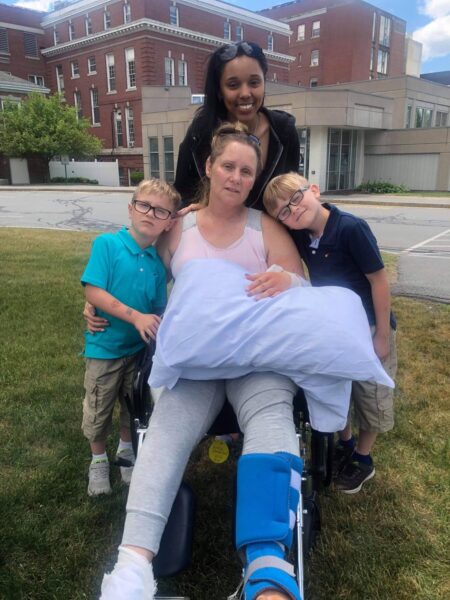 BANGOR, Maine — July 2021 — Chantal Hayes visits with all three of her children for the first time in five weeks following a car crash that left her with severe injuries for which she is still being treated at Northern Light Eastern Maine Medical Center in Bangor. Clockwise, surrounding Hayes, are son Malachi, daughter Karis, and son Joah. (Courtesy of Jonathan Nathaniel Hayes)

Despite her traumatic physical injuries, Chantal Hayes said the most challenging aspect of her recovery is being away from her children for so long. Among some milestones Hayes missed while hospitalized are her daughter’s senior prom and high school graduation ceremony.

“The most difficult thing that I have had to overcome is the four walls that surround me,” Hayes said. “I have to choose every day to think of my children, [despite] the aching inside me and the anxiety that swells up in me to want to be in their lives every day … and realizing that I can’t [do it] could easily destroy me.”

When notified of the crash, Jonathan Nathaniel Hayes immediately rushed to be near his sister, who was transported to the Bangor hospital by a LifeFlight helicopter. He spent the first two weeks there, but responsibilities at home in the St. John Valley reduced his visits to weekends.

He continues to advocate for Chantal by trying to find a rehabilitation facility in the St. John Valley to treat her so she can be closer to her children during her recovery. So far, this effort has been unsuccessful.

“She has a very long road of healing and rehabilitation ahead of her, and she will continue to have needs that need to be met for herself, as well as her children,” Julie Hayes said. “She has always been a hard working mother — working multiple jobs to make ends meet and provide for her kids, but now she needs help in that area.”

“Different friends have done fundraisers for Chantal, and several businesses have done things like collecting tips and donating them to Chantal,” Julie Hayes added.  “I am amazed and proud to live in a  community that steps up and helps one of their own in a time of need.”

Julie Hayes’ fiance, Clarence Levesque of Crown of Maine Riders, has organized a motorcycle ride fundraiser to take place on Aug. 15 with proceeds supporting Chantal and her children.

Registration for the ride is $40 per motorcycle, but donations can also be made at Acadia Federal Credit Union to the “Chantal Hayes Relief Fund — Motorcycle Ride” in care of Julie Hayes.

A gofundme.com page started by a friend also remains open.

Before the accident, Chantal Hayes served as a worship leader and singer for her church, AGAPE Christian Fellowship in Fort Kent. She remains optimistic about her recovery by relying on her Christian faith.

“Each and every one of us has our story — what makes or breaks us is our faith,” she said.

A warm front moved through overnight ushering in higher dew points and humidity levels. Low-level clouds across the Valley will keep temperatures in the lower 70s today for most Valley locations.
Our Sponsors END_OF_DOCUMENT_TOKEN_TO_BE_REPLACED