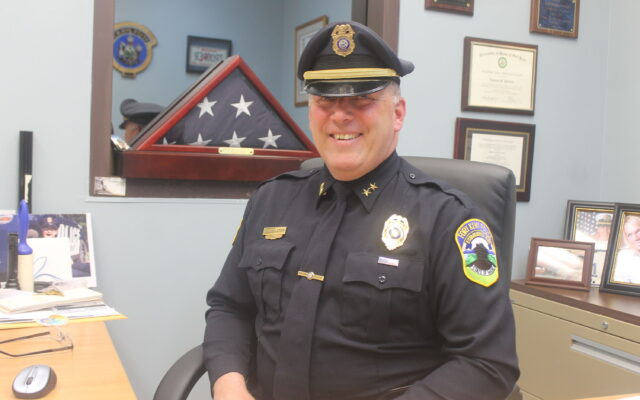 Pelletier, 58, submitted a letter of resignation to the Fort Kent Town Council on Monday. His last day at the Fort Kent police station will be July 30.

“I guess I’m tired and I’m looking for a change after 33 years of police work,” Pelletier said on Wednesday.

Pelletier also cited state and federal efforts to rescind qualified immunity for police officers and proposals to decriminalize all drugs as factors in his decision.

“The whole political climate surrounding law enforcement in the last year and a half is not comfortable with me anymore,” he said. “When we have lawmakers proposing laws that are counterproductive to what policing is supposed to be, that’s hard for me after 30-plus years and I can’t be enthusiastic about where we’re at.”

“It’s frustrating for us as police officers to see all of these negative anti-police movements during the last year and a half, although we’ve been very lucky because locally we do not have that big push for defunding the police,” Pelletier said. “By contrast, most people are very supportive of our police department here and I am very appreciative of the support I’ve had from the community since I’ve been here.”

Pelletier joined the FKPD as chief in 2014, a few years after he retired from Maine State Police.

“My first year here was a trial by fire,” Pelletier said. “I immediately responded to some major things going on in the town. We had a lockdown at the high school, a barricade situation and the Kaci Hickox story.”

Nurse Kaci Hickox put Fort Kent on the world stage when she returned to town after treating Ebola patients in Africa. Although Hickox had no symptoms of the deadly disease, members of the public panicked and the state filed a court action seeking that Hickox be prevented from entering public spaces.

Pelletier found himself the interview subject of international media outlets from Fox News to CBC and the BBC. The new chief encouraged people in the greater Fort Kent community to remain calm, and he put the situation into perspective when he delivered groceries to the Violette Settlement home of Hickox and her boyfriend.

“Although not part of our jurisdiction, we certainly consider them part of our community,” Chief Pelletier said.

Fort Kent police officer Cole Pelletier, who will graduate from the police academy in Vassalboro on Friday, said he is thankful to Chief Pelletier for providing him with the opportunity and encouragement to join law enforcement.

“Chief Pelletier implements a no-nonsense approach to police work and balances the needs of the community at the same time,” Cole Pelletier said. “He insists on a common-sense approach to law enforcement, which in today’s society is critical. I have learned from him that you can employ common sense in police work, but still uphold the law.”

Fort Kent Fire Chief Ed Endee said he and Chief Pelletier had a close working relationship that extended to the relationship between the police and fire departments.

“We had a daily meeting to discuss common issues and coordinate our services.

“This relationship is critical to best serve the public,” Endee said.  “We had each other’s trust and used each other as sounding boards for issues in each department. There is no question that he is a tremendous asset to the town.”

Chief Pelletier has led a life of public service. He served six years on active duty in the United States Navy, as well as four years in the reserves before becoming a police officer.

He comes from a line of law enforcement professionals that began in 1939 when his grandfather Leonard Pelletier became a Maine game warden. Chief Pelletier’s father Gary Pelletier also served as a game warden for 30 years.

Chief Pelletier was also interim town manager in 2018, when he stepped up to fill the role after the retirement of Don Guimond, and until Fort Kent hired current Town Manager Suzie Paradis.

“I have enjoyed working with Chief and I wish to thank him for his years of service to this fine community and support his decision,” Paradis said of Pelletier’s retirement. “I want to assure the community that we are not closing the department and are working on hiring new officers. The town of Fort Kent will not close down its police department.”

“I feel confident that there will be some viable candidates,” Pelletier said.

Pelletier is contemplating a future career in something other than law enforcement. In the meantime, he said he is looking forward to spending more time with his family — wife Carol Pelletier, daughter Jamie Pelletier and son Derek Pelletier, who followed in his father’s footsteps to serve in the Navy, where he is a helicopter pilot.

“As the wife of the chief, and a law enforcement spouse for over 33 years, I think the most important thing to accept is that he is never really off duty,” Carol Pelletier said. “There is always a chance of the phone ringing, day or night , whether at home or out.”

Carol Pelletier said she is proud of her husband’s contribution to the town, and for how he handled the growing pressure that police departments and law enforcement officers have faced over the past few years.

“For every negative comment we hear it’s humbling to hear from the many more supporters,” Carol Pelletier said. “I do think the town has big shoes to fill.”

A cold front will stall out along the Downeast coast while high pressure builds into the Valley from the northwest today and tonight.
Our Sponsors END_OF_DOCUMENT_TOKEN_TO_BE_REPLACED