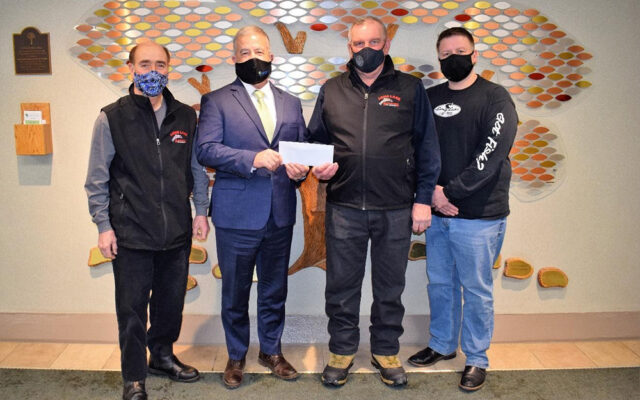 Contributed • July 14, 2021
The ice that made the Long Lake Ice Fishing Derby possible back in January may be gone, but the Derby is still having an impact in the community with a recent $60,000 pledge of support to Northern Maine Medical Center’s capital campaign for its four-story expansion project.

FORT KENT, Maine — The ice that made the Long Lake Ice Fishing Derby possible back in January may be gone, but the Derby is still having an impact in the community with a recent $60,000 pledge of support to Northern Maine Medical Center’s capital campaign for its four-story expansion project.

Derby organizers have supported cancer patients and their families for more than 16 years through annual contributions to the Edgar J. Paradis Cancer Fund. The fund uses contributions to help families pay for travel to and from cancer treatments out of the local area. When Derby organizers contacted NMMC CEO Peter Sirois with this year’s donation, they heard about how the expansion project would benefit the hospital’s oncology patients.

“You can’t have comprehensive oncology services without a good surgical service in place,” said Sirois. “Early detection, certain treatments, surgical removals, all depend on having surgical services. The core of our expansion project included the addition of two state-of-the-art operating rooms and upgraded surgical facilities. This benefits all St. John Valley residents who have general surgery needs and it allows us to provide comprehensive cancer care without patients needing to travel great distances.”

The hospital officially occupied those new operating rooms in June – a milestone moment in the ongoing expansion project that involves the construction of a 15,600 square foot, four-story addition to NMMC’s existing hospital and upgrades to existing facilities.

“We wanted to give back and make sure NMMC met its capital campaign fundraising goal of $600,000. I believe our donation accomplished that,” said Pelletier.

The donation to NMMC’s capital campaign is above and beyond the $18,000 that the Derby donated earlier this spring to the cancer fund.

“We have been very prudent with the derby over the years and have grown it to a size that is recognized as the largest ice fishing derby in Maine. We have strong reserves and our projections for the future years look very favorable to the point that we felt comfortable pledging the $60,000 over a five-year period with the hope that we can actually pay off the pledge in three years,” said Pelletier.

Derby organizers will begin planning for the 2022 event in September. In its first 16 years, the derby has grown to be the largest of its kind in the state and with that impressive growth, comes changes. Currently, they are working on a few projects, including obtaining their 501c3 status and setting up an app and website with the assistance of a local web designer.

“This will certainly make things a lot easier logistically as far as on-line access for registrations, raffles, clothing, lodging, restaurants, bait dealers, general information, etc. We expect that the app will definitely be ready by the time our September meeting comes around. The projected date for our 17th annual derby is January 29 and 30, 2022,” said Derby Chair Paul Bernier.

The ongoing construction project at NMMC has entered a new phase now that the new operating rooms are in use. The former operating rooms are being demolished so that space can be renovated and modernized. NMMC’s laboratory has moved into its new space on the first-floor level of the expansion, along with lab and radiology reception. The children’s psychology unit has newly finished space on the second floor, including a gym for the children.

Final touches are being completed in other areas, including in the new cafeteria. Northern Maine Medical Center is planning a special event to celebrate when the expansion is completed.

A cold front will stall out along the Downeast coast while high pressure builds into the Valley from the northwest today and tonight.
Our Sponsors END_OF_DOCUMENT_TOKEN_TO_BE_REPLACED