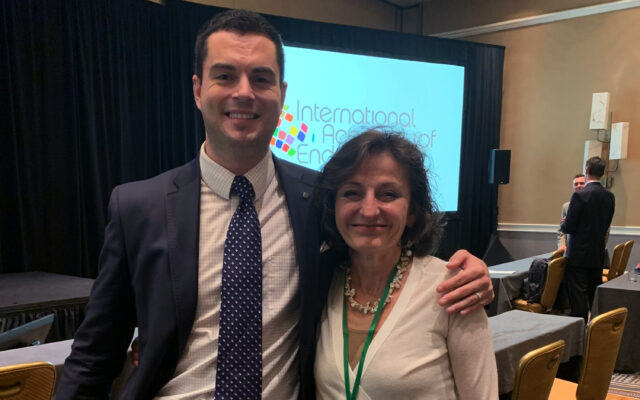 Hannah Catlin • July 12, 2021
The last place Carol Cote expected to find someone from her little corner of the world was at a dental conference in Scottsdale, Arizona. But that’s exactly where Cote met fellow Valley kid Richard Raymond.

MADAWASKA, Maine — The last place Carol Cote expected to find someone from her little corner of the world was at a dental conference in Scottsdale, Arizona. But that’s exactly where Cote met fellow Valley kid Richard Raymond.

Cote, originally from Madawaska, is a physical therapist specializing in jaw and neck pain and Raymond, of Fort Kent, is an endodontist. They live in New Jersey and Georgia, respectively.

At the International Academy of Endodontics conference in late June, Cote and Raymond were both speakers. In his introductory remarks, Raymond mentioned he was from northern Maine. Realizing the connection, Cote approached Raymond after the session and introduced herself in their shared Acadian French.

At that, Cote said, Raymond whirled around in surprise.

“You’ve never met these people but you automatically have so much in common — the background, the upbringing, the culture,” Cote said. “We’re strangers but we’re not strangers and that’s what you call growing up in the St. John Valley.”

Cote graduated from Madawaska in 1976 and Raymond from Fort Kent in 2002. Despite the gap in age and the distance between their new homes geographically, Cote said the bond was instantaneous.

The two talked for a while about their mutual experiences growing up in the crown of Maine, and found that while they didn’t know each other directly, they had shared acquaintances and family friends. Raymond’s father, Richard Raymond Sr., was a dentist in Fort Kent for many years, and Cote had known him.

“It is such a pleasure to meet people from the Valley wherever you go,” Cote said. “Our Valley is a one-of-a-kind special place on this Earth that I feel privileged to call home.”

A cold front will stall out along the Downeast coast while high pressure builds into the Valley from the northwest today and tonight.
Our Sponsors END_OF_DOCUMENT_TOKEN_TO_BE_REPLACED