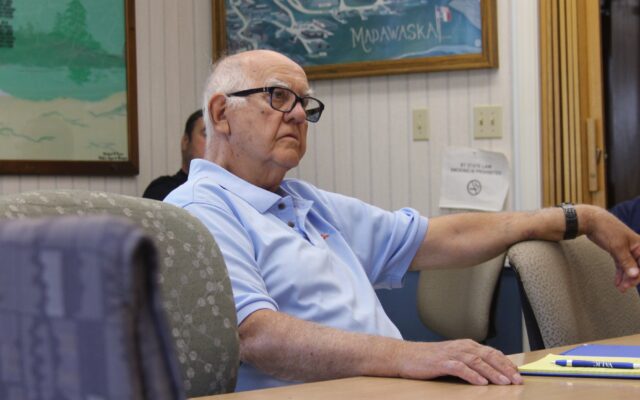 Hannah Catlin • July 2, 2021
Staring out the window and looking for flashing lights, Real Hebert said it felt like he spent an hour waiting for an ambulance when he called 911 on Jan. 15. His wife Simone Hebert’s breath had started coming in strange patterns and although her eyes were open, she was totally unresponsive.

MADAWASKA, Maine — Staring out the window and looking for flashing lights, Real Hebert said it felt like he spent an hour waiting for an ambulance when he called 911 on Jan. 15. His wife Simone Hebert’s breath had started coming in strange patterns and although her eyes were open, she was totally unresponsive.

It took 28 minutes for the Madawaska ambulance to respond from where it was, 28.5 miles away on Route 1, returning from transporting a patient to Cary Medical Center in Caribou. But that doesn’t mean it was any less traumatizing for Real Hebert, who waited on the line with 911 the whole time, cleaning up the saliva pooling in Simone’s mouth and pleading with the dispatcher for updates on the ambulance’s arrival.

Stay with me, stay with me — the dispatcher kept saying — don’t leave me.

“If you’ve seen somebody have a seizure, you’ll remember it the rest of your life, but if you don’t, you don’t want to know,” Real said. “That’s my wife. I wait and wait and wait.”

Simone was transported safely to the hospital that day, and has since made a full recovery. She doesn’t remember anything that happened during the seizure — a fact she’s grateful for — and said she “woke up” at Northern Maine Medical Center in Fort Kent much later.

What happened when Real Hebert called 911 was everything but the absolute worst case scenario in an emergency services industry barely surviving through dire staffing shortages and other economic pressures.

Madawaska, like ambulance services across Maine, is struggling to employ enough EMTs to keep both its primary and backup crews full every day. Cyr said that only about half of the day shifts each week are covered by a backup team. The shortage led directly to Hebert’s experience: with only one truck available, when the first crew is on a call there’s nobody to respond to a second emergency.

In these dire situations, a dispatcher will immediately call for backup to one of the other nearby departments — in Madawaska that’s Van Buren Ambulance Department and Ambulance Services Inc. in Fort Kent. On Jan. 15, logs show that Van Buren was sent out one minute after Madawaska. But just another minute later, Madawaska’s ambulance was already passing through Van Buren, and the call for back-up was canceled. Cyr said ASI was not available to respond.

What the Heberts experienced is relatively rare and most calls for backup are answered by one of the two departments, Cyr said. For the EMTs, it’s a dreaded position to be in.

“It’s a small community, everybody knows everybody,” Cyr said. “We’re fearful of it. It could be our family member who winds up needing an ambulance as well.”

The fastest way to make sure wait-times like this never happen would be to hire four or five more part-time EMTs to cover backup shifts, Cyr said, but that’s easier said than done.

The Madawaska Ambulance Department is still able to employ multiple full-time EMTs, which puts it in a lucky position on the scale of departments statewide. In May, WGME reported that fewer than 70 of Maine’s 272 departments were both full time and paid, rather than volunteer.

Directors at ambulance departments across The County, including Madawaska, report difficulty recruiting enough EMTs to fill shifts. Down the road in Van Buren, the department has been without a director for a month — that role is being filled on an interim basis by the deputy town manager while the search for a long-term replacement continues.

It’s a national phenomenon that’s been ravaging rural departments for years. With EMS workers citing overwork and underpay — turnover at ambulance departments in Maine is high. The State EMS Board is convening a task force this fall to workshop solutions for the rural areas in Maine especially hard-hit by the staffing conundrum.

On the front end, EMS training can be costly and long. At the highest level of certification, paramedic courses can take a year or more to complete and cost thousands of dollars. But wages at local ambulance departments already facing a budget squeeze aren’t keeping up with certification costs. In Madawaska the starting wage for a full-time paramedic is $14 — a number Cyr said he updates every three years to keep up with the norms in the area.

This fall Madawaska is planning to host an EMT training course to encourage locals to get certified at the basic level for the vacant part-time positions. Cyr said that the department tries to help fund training to the extent it can.

But in the meantime, the Heberts aren’t satisfied with the staffing explanation. At a June 29 meeting of the board of selectmen, Real Hebert asked the board to investigate the policies of the ambulance department and call him back to a future meeting with a response for him and the public to hear.

At the meeting, Cyr relayed the department’s staffing woes — the roster was especially tight in January with one of Madawaska’s full-timers out on medical leave, and one part-timer unable to help out because his primary employer prevented him from taking shifts in Madawaska as a COVID-19 safety precaution.

Nevertheless, Hebert is demanding the town establish a system to prevent long wait-times and respond differently when a wait is inevitable. He said he wanted members of the board to read a transcript of his call with dispatch and imagine what they would have done in his place. The board agreed to request more information from Cyr and get back to him.