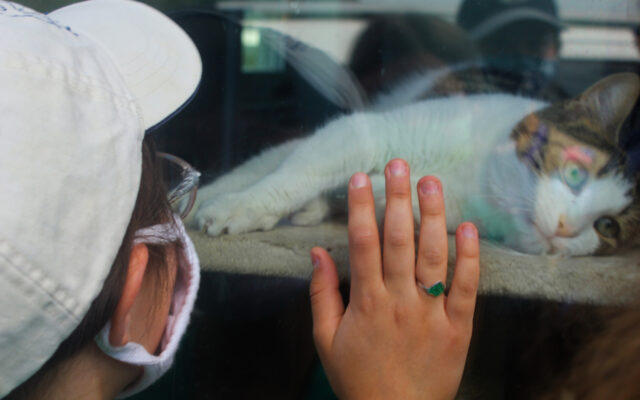 FORT KENT, Maine — Homeless cats being sheltered in Fort Kent while they await adoption were the recipients of good deeds by Girl Scout Troop 83 members.

The Scouts helped the cats of PAWS Animal Welfare Society while the girls worked on a Bronze Award service project.

PAWS, a non-profit no-kill shelter, is the only cat rescue operation in the St. John Valley.

“We have to do a big service and we decided to help PAWS,” Girl Scout Charlotte Grange said.

Troop member Taeya Bouchard, who has two cats of her own, Peanut and Cuddles, said she was happy the project involved supporting PAWS.

The Girl Scout Bronze Award is the highest honor a Girl Scout Junior (fourth- and fifth-graders) can achieve.

“They had to team up and find a need in their community and help in three different ways with a short-term project, an intermediate project and finally a long-term project,” Kirk said.

The girls first held a ‘PJ’s for PAWS’ event at Fort Kent Elementary School on June 4 during which students could wear pajamas to school that day in exchange for donations to the cat shelter.

“This will help tremendously,” PAWS Board president Garry Bouchard said. “The two items we obviously use the most are litter and food.”

The Troop members also decorated plastic bins, which will be placed at Shop and Save in Fort Kent to collect cat-related donations purchased from the store.

The Girl Scouts also repurposed a wooden chest to be placed outside the shelter so that people can submit cat supply donations for the long term during off-hours.

High pressure will drift east today as a low pressure area and associated fronts moves towards the Valley from the west.
Our Sponsors END_OF_DOCUMENT_TOKEN_TO_BE_REPLACED