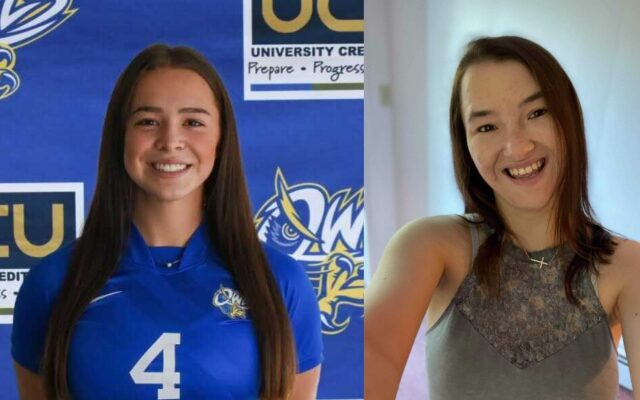 Hannah Catlin • June 25, 2021
It was a season of nostalgia for Owls varsity softball coaches Hannah Nadeau and Desiree Belanger. After years away from the diamond, the two Madawaska grads returned to their alma mater to coach the sport they once played together.

MADAWASKA, Maine — It was a season of nostalgia for Owls varsity softball coaches Hannah Nadeau and Desiree Belanger. After years away from the diamond, the two Madawaska grads returned to their alma mater to coach the sport they once played together.

Hannah Nadeau, Class of 2018, and Desiree Belanger, Class of 2017, were both four-year starters for the Owls. Nadeau was a catcher and Belanger a shortstop. When they heard their former coach, Matt Rossignol, was leaving to become Van Buren’s athletic director, the lifelong teammates filled in.

“Madawaska is home and always will be,” Nadeau said. “I knew that if the opportunity to coach would become available that I should jump on it. It was nostalgic to say the least.”

From time to time during games, they would catch each others’ eyes — it almost felt like they were playing again, Belanger said.

The season was also an opportunity to apply what they had learned from Rossignol, other coaches and their own experience to mentor young athletes. They adapted drills and plays they had learned as players to their new team, and tried to pass down some life lessons along the way.

“One of the most valuable skills that I tried to pass on to my team was work ethic,” Nadeau said. “Working hard will not only benefit you playing in a sport but will help you in all areas of your life. Employers will often hire a hard worker over most people, so it is an important skill to develop.”

It was no surprise these two particular athletes returned to the field as coaches, Rossignol said. In his decades coaching softball, they were both special athletes and had great “softball smarts” to boot.

“Hannah was as fine a catcher as I coached in my 25 years as a softball coach, and by far the best bunter I’ve ever had… Her speed was unmatched,” Rossignol said. “Desiree was an incredible shortstop, making plays that most shortstops could not make because of her unique athleticism.”

The season itself was not an easy one. With a small and inexperienced team, Madawaska lost all but one game and ultimately opted out of the playoffs. But that just made the victories all the sweeter. Both Nadeau and Belanger said their one victory, a comeback win on the road against East Grand, was their favorite game of the season and a big learning opportunity for the players.

On top of the challenges on the field, both Nadeau and Bellanger had to balance full work schedules on top of their coaching responsibilities. Nadeau commuted two hours each day from Presque Isle, where she was wrapping up her junior year at the University of Maine at Presque Isle and working part time at County Physical Therapy. Bellanger helped out when she could while working full time at Twin Rivers Paper Company.

At the end of the year, the Owls opted out of the playoffs — the combination of tight schedules and ambivalence on the part of the team. But both coaches said they hope they made an impact on their players during their time together.

The two aren’t certain if they will return next season: Nadeau has another year of college ahead of her and is getting married this summer to Rossignol’s son, Andre. Belanger is currently in the process of enlisting in the United States Air Force — a lifelong dream of hers.

Even though the future is uncertain, it was a season to remember for the former teammates. For both, being an athlete at Madawaska shaped the people they’ve grown into.

“Becoming a coach and actually working beside her [Nadeau] was one of the greatest feelings that I could have had because it brought back all those memories of us playing together,” Belanger said. “Actually getting involved in the sport brought back all the feelings I had in high school and made me realize not to take things for granted.”

High pressure will drift east today as a low pressure area and associated fronts moves towards the Valley from the west.
Our Sponsors END_OF_DOCUMENT_TOKEN_TO_BE_REPLACED