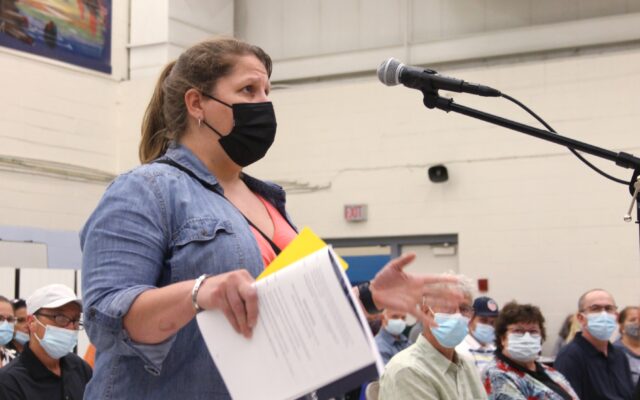 Hannah Catlin • June 21, 2021
At what was otherwise a straightforward annual town meeting, the steady flow of events was briefly upended by a vigorous debate over a small, 50-by-241-foot strip of grass on 25th Avenue.

MADAWASKA, Maine — At what was otherwise a straightforward annual town meeting, the steady flow of events was briefly upended by a vigorous debate over a small, 50-by-241-foot strip of grass on 25th Avenue.

Article 39 on the town meeting warrant was slated to give permission to the Madawaska Board of Selectmen to sell the land, which is technically an undeveloped town way. The article also included a $1,446 price tag — derived from a standard, square footage price the town uses to value its land — and a caveat that the new owner be responsible for the cost of surveying the property.

Ultimately, the voters denied the selectmen the right to sell the land, after Shannon Migneault, whose property abuts the land to the south, made an impassioned plea to the town for transparency on the sale.

She had been unaware the property was on the town meeting warrant, and hurried into the meeting an hour late to ask the board to commit to giving her an equal chance to buy the property as the northern abutter, an apartment complex owned by landlord Mark Cyr.

Migneault was concerned that the sale would go ahead quickly following the town meeting, as Cyr had already surveyed the property. Cyr said he surveyed the land at the same time as a survey of his adjacent property, because he was interested in eventually buying it, not because any deal was already in place.
The town’s policies when it comes to selling public land came under question from Migneault and others at the meeting. But the rules are relatively ad hoc. Without a town charter, the board gets its authority to sell land from the townspeople, which is why the issue had to be put on the town meeting warrant. In other places in Aroostook, councils have the authority to sell land without consulting the public at all.

But this case-by-case and voter-based authority means the other rules around property sale are not set in stone. Town manager Gary Picard said that for the most part, the board operates off of past practice, in that they have traditionally approached both abutting landowners before a sale.

“The article, as written, would give the board authority to sell, not naming any person(s), at which if approved the board could then begin the process of selling by asking abutters if they would be interested, and then selling to those willing under the terms of the sale as described in the article,” Picard wrote in an email.

Though Migneault spoke to Selectman Jason Boucher last year about her interest in the land, she said it was only because she had seen him walking the parcel with Cyr from her adjacent home, and approached them of her own accord. Migneault said she had not yet been approached by the town directly. She feared that if the article had gone through, the town would have sold the property without first notifying her.

“Call me cynical, which I’m not, but I’m not naive either,” Migneault said in a later interview.

Picard said Cyr approached the town initially with his interest in the land in 2020, and that’s what kicked off the process. Cyr, who owns a number of properties in Madawaska, said that he was interested primarily in expanding the limits of his existing property for snow maintenance — in the past, he said he has received a large fine for plowing onto public lands.

Cyr added that in terms of development, he had considered building a playground, set back from the property line, for the children who live in the apartment complex.

Migneault and the previous owners of the house she now lives in have historically maintained the land in question, and she and her family currently mow the lawn and use the plot to host her children’s swing set.

At the meeting, Migneault’s pleas were answered by the attending audience, who booed when Migneault’s questions — which were related to the town’s conduct during the process and not to the explicit language of the article — were dismissed as out of order. One attendee, Spencer Clemens, spoke on Migneault’s behalf. Clemens suggested adding language to the article to require the board to approach both abutters before the sale.

But Migneault’s motion to do just that came moments after the moderator, Bob Bellefleur, closed out discussion, rendering the attempt null. The vote passed handily in Migneualt’s favor, against the sales permission, and the issue was dead.

After the meeting, Boucher said that the rules of order were vital to maintaining the orderly progress of the meeting, and in the past a failure to adhere to them had led to chaos.

Cyr said he was frustrated by the way the meeting played out, and that he didn’t intend to go behind any of his neighbors’ backs. He said he was interested in pursuing an even split between himself and Migneault. Migneault said she would prefer the land remain public, but that if it had to be sold, she was also interested in half.

However, the failure to pass the article giving the board authority to do these things, means the land sale is stalled, until the town can vote again.

A cold front moves through today with scattered showers that will taper off this evening as high pressure builds into the region with partly cloudy skies.
Crown Politics END_OF_DOCUMENT_TOKEN_TO_BE_REPLACED

All five candidates running for two seats on the Fort Kent Town Council gathered at a live question and answer forum.
Our Sponsors END_OF_DOCUMENT_TOKEN_TO_BE_REPLACED