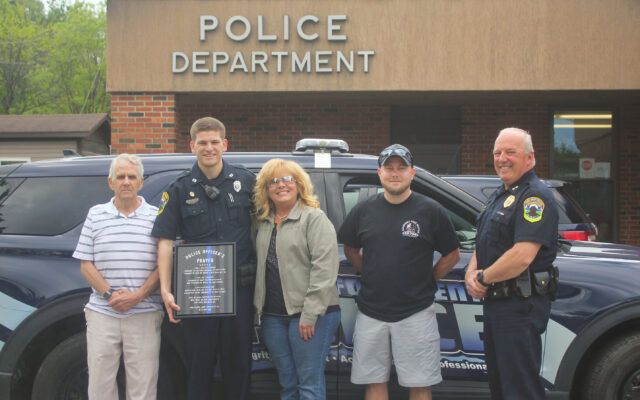 Jessica Potila, SJVT / FhF Staff Writer • June 10, 2021
The family of a Fort Kent woman expressed their appreciation for the police officer who saved her life two months ago.

FORT KENT, Maine — The family of a Fort Kent woman expressed their appreciation for the police officer who saved her life two months ago.

Fort Kent police officer Jack Maloney in April responded to a call of an “unattended death” at a local residence.

Jacqueline “Jackie” Blier, 75, had suffered a medical emergency and had no life signs when Maloney arrived at the scene along with first responders from Ambulance Service Inc., according to Fort Kent Police Chief Tom Pelletier.

Maloney, 22, helped ASI responders load Blier into an ambulance and performed lifesaving CPR chest compressions on her while she was on a gurney in the back of the ambulance.

Maloney was successful in reviving Blier, who was transported to Northern Maine Medical Center and later released home.

“She means so much to our family,” Travis Caron said of his grandmother. “She’s fun to be around. She constantly makes us laugh and she doesn’t let us go hungry. If we haven’t eaten at any particular time of the day, even if she’s tired she’ll get up to cook a huge meal. She was always one to spoil us especially when my brother and I were younger.”

Maloney, of Concord, Massachusetts, joined the department last fall as a reserve officer. He graduated from University of Maine at Fort Kent in May with a bachelor’s degree in public safety administration.

“We felt he was deserving (of the honor) because being so young, jumping right in to try and save her live was pretty impressive; it’s not easy,” Travis Caron said. “Also, with everything going on in the world and all the negativity around law enforcement, we just wanted to show our appreciation and for us to show we recognize the good.”

Jackie Blier has always loved spending time with her dogs, singing karaoke, and playing guitar and accordion. She is also an accomplished cook, according to her grandson.

“My favorite thing she cooks is her chicken stew,” Travis Caron said. “I have never had one better.”